Article and photos by Gregory Havel

Plaster is known to have been in use for more than 9,000 years. The earliest plasters were lime based and often applied directly over masonry. Gypsum plasters (most commonly used inside buildings today) were in common use in Europe more than 700 years ago. 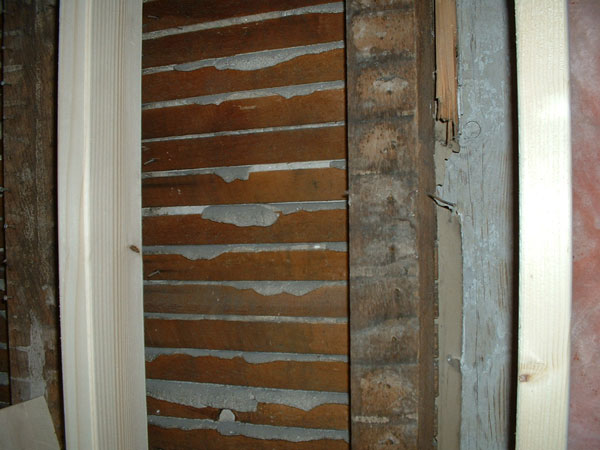 Interior plaster is most commonly used with laths. The earliest laths used in North America were rough, narrow strips split or cut from wood to which the base coat of plaster was applied. Photo 1 shows a wall from the late 1800s during a recent remodeling project. The lath and plaster have been removed from one side of an interior partition, showing the rough-sawn wood studs and the back of the wood lath and plaster on the other side of the wall. The plaster adhered to the rough face of the laths, and was strengthened by the plaster that was forced between and behind the laths. Laths used to support ceiling plaster were thicker and stronger than those used to support wall plaster, due to the greater load supported by them. Concealed spaces with four combustible surfaces were formed by the studs and lath, and provide a channel for the rapid spread of fire.

More recently, plaster has been applied over expanded metal laths. Photo 2 shows a curved section of wood stud wall with expanded metal lath nailed to it, between two flat surfaces formed by gypsum drywall board; and a sample for the architect and owner to demonstrate how the plaster will be applied throughout the new building. The bare lath attached to the studs by screws and nails is visible at the top of the photo. The next section below shows the base (also called the “brown” or “scratch”) coat, which is 0.5 to 1.0 inch (12.5-25.4 mm) thick, depending on the wall and type of lath. The third section below (near the blue tape) shows the second or “float” coat, which is about 0.25 inch (6 mm) thick. The bottom (white) section shows the third (“finish” or “setting”) coat, which is about 0.125 inch (3 mm) thick. The concealed space formed by this method has two combustible surfaces of planed lumber.

Since the 1930s, plaster was applied in two coats over gypsum drywall board. This drywall board was usually manufactured in small strips (four feet (1.22 m) long by 12, 16, or 24 inches (305, 406, or 601 mm), depending on the age and manufacturer; and usually 3/8-inch (10 mm) thick) for easy handling. If this drywall board had holes punched through it for the plaster to be pressed into for adhesion, it was known as “button board.” Other types, called “gypsum lath” or “rock lath” were finished on one side with a rough-surfaced paper impregnated with gypsum crystals, to which the plaster adhered. Photo 3 shows an interior wood-frame wall during remodeling. The plaster and gypsum lath has been removed from one side of the wall, exposing the back side of the gypsum lath on the other. Photo 4 shows a broken edge of the gypsum lath and plaster. From the wood stud, the first layer is the gypsum lath. The second layer is the first coat of plaster. The third layer is the finish coat of plaster, with a textured surface.

The most recent development in plastering is “veneer plaster,” a thin plaster applied in one or two coats over a specially surfaced drywall board called “blue board” because of its color. This system compromises the low labor cost of hanging and taping drywall board in 4×8 foot sheets on wood or metal studs, with the durability and attractive finish of a plastered wall. Typically, the veneer plaster is less than 1/8-inch thick in either the one- or two-coat system.

Both gypsum plaster and gypsum drywall board provided fire resistance to the building, due to the chemical composition of gypsum. It is hydrous calcium sulfate, with the chemical formula CaSO4-2H2O. This means that it is calcium sulfate (plaster of paris) combined at the molecular level with water of crystallization. This water makes up about 20 percent of the gypsum by weight. Although gypsum does not burn, it does change its chemical formula and structure when raised to high temperatures: the water molecules are detached from the calcium sulfate, weakening it and reducing its fire resistance.

Walls and floor-ceiling assemblies using both gypsum drywall board and lath and plaster have been tested by Underwriters Laboratories (UL) and other independent testing laboratories, and have had their fire resistance rated in hours (1-hour, 2-hour, etc.) We must keep in mind that these fire resistance ratings apply only to a fire on one side of the partition, not on both sides; and with no fire inside the wall or floor-ceiling assembly.