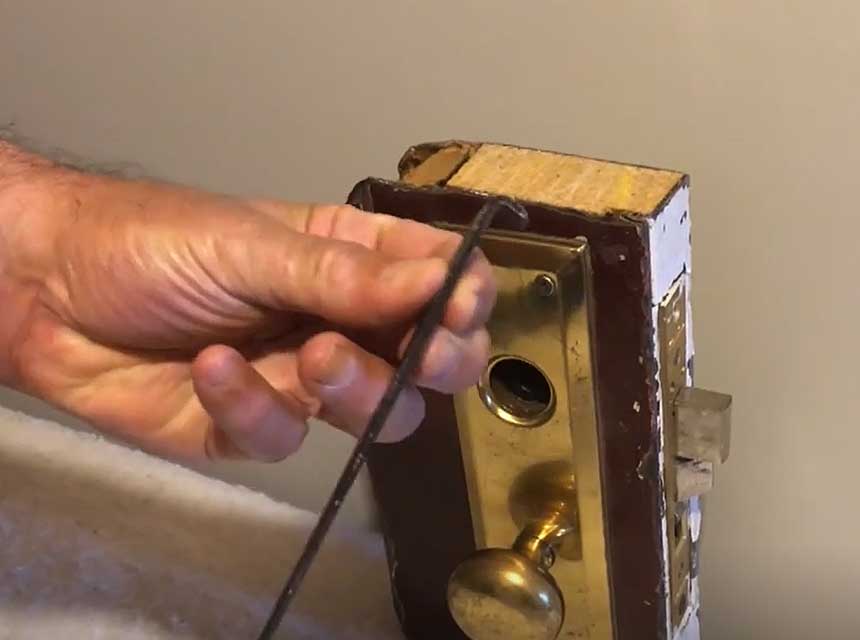 As an officer, making the decision to force open a door takes a few seconds after you evaluate the situation and the conditions. It’s a size-up that you must perform to choose what methods to use to make entry. A common call that could have even the best officers taking time to decipher is an alarm ringing inside a residence with no conditions evident. Of course, you’re going to try the doorknob, ring the doorbell, or knock violently at night to try to wake the sleeping residents before beginning operations. The officer will also weigh the decision after he or his personnel conduct a 360° size-up.

It’s funny, when you speak to some members about their idea of a 360° size-up, many forget to walk up to the window and shine a flashlight inside the residence to get a read on the conditions inside or try and lift a window to see if it’s locked or opens easily to look inside. The window size or shape may provide information: The window over the kitchen sink and the bathroom windows will normally be smaller than the other windows. Also look at the types of vents that may be attached to the structure’s exterior walls. They may be different types and styles; any smoke issuing from them may lead you to the kitchen stove, bathroom, or clothes dryer as the fire’s location.

If the perimeter’s size-up proves negative, the officer must still decide which forcible entry tactic to use in relation to the conditions at the door. Flexing the top of the door inward like when trying to track down a gas leak in an apartment building or sticking your nose at the door frame and getting a whiff of burnt food might just give you the option of forcing the door or entry through a window. For inner city firefighters, entry into an apartment during the day from a fire escape is a common procedure, but in the middle of the night the resident may think his home is being broken into. We’ve had firefighters injured by gunshots from a semi-awake resident, so as an officer, always consider that a door is cheaper to replace than a life.

If you do encounter a “whiff of food” at the door but don’t have any smoke, consider using the “through-the-lock” method of forcible entry. Pulling the lock cylinder with a K tool, lock-pulling officer’s tool, or modified halligan tool might limit damage to the door or residence. If the lock cylinder has a cheap metal ring around it, attempt to pry it off first so the lock puller can get a good bite into the cylinder. Sometimes, just prying it off with a screwdriver will do the trick.

When placing the lock puller on the cylinder, strike it downward so it bites into it. Instead of quickly pulling up or down on the cylinder, put side-to-side force on it first. This might snap some of the inner workings or loosen them up before you pry the cylinder out of the keeper. It may also prevent a cheaper metal door from deteriorating and caving in at the lock cylinder. Once you remove the cylinder from the door, expect that the circular hole on the door has been distorted and can be sharp enough to cut your finger.

Next, look at the back of the cylinder and see if there’s a tumbler or stem, telling you what side of the pick to use. If there’s a tumbler, reach inside the hole to move it from the 5 o’clock to the 7 o’clock position or the 7 o’clock to the 5 o’clock position, depending on how it was installed, to unlock the door. Sometimes, the tumbler will be difficult to move and may require some more ingenuity or tactics. Holding onto the doorknob and rapidly jiggling it while moving the tumbler will help you disengage the deadbolt. If it still won’t open, be aware that some locks may have a double locking mechanism or “slam lock,” requiring you to reinsert the pick to the 3 or 9 o’clock position and move the mechanism downward to release the lock.

After inspecting the back of the cylinder, you may notice a stem on it. You will have to insert the straight end of the K tool pick or a small flathead screwdriver into the keeper to release the deadbolt.

Once you have removed the lock, you may encounter another obstacle: the security slide chain. This device is secured from the inside by the occupant; when engaged, it could mean someone’s home. Be aware that after a diligent search, you may find nobody inside; they may have exited using a secondary means of egress. Trying to pry this chain out by using the halligan’s adz end usually won’t work because there’s too much room between the door and the frame.

Many of us were taught to put the forks on the chain and drive it off since it’s installed with cheap screws. What happens when it’s installed with heavy-duty materials? It’s easy for the cheap brass chain to get wedged deeply into the crotch of the halligan tool, and then you’re trying to remove it. Or, you may encounter a much more substantial chain and have to revert to forcing the hinges or calling for a power tool to cut it.

Another quick method for removing these devices is to put pressure on the door to make the chain taut. Then insert the fork of the halligan tool between the door and frame toward the top of the door. Use the tool’s forks to chop down on the chain; it should snap right off the door. Now you’re in, and the officer and residents are happy that you caused minimal damage.

MICHAEL N. CIAMPO is a 34-year veteran of the fire service and a lieutenant in the Fire Department of New York. Previously, he served with the District of Columbia Fire Department. He has a bachelor’s degree in fire science from John Jay College of Criminal Justice in New York City. He is the lead instructor for the FDIC International Truck Essentials H.O.T. program. He wrote the Ladders and Ventilation chapters for Fire Engineering’s Handbook for Firefighter I and II (Fire Engineering, 2009) and the Bread and Butter Portable Ladders DVD and is featured in Fire Engineering’s “Training Minutes” truck company videos.

Ventilation-Limited Fire: Keeping it Rich and Other Tactics Based Off Science