Article and photo by David DeStefano

Virtually every fire department regardless of size has a policy or guideline to facilitate the transmittal and response to a Mayday call. Because Maydays are low-frequency incidents, many of these well-intentioned policies were last reviewed or practiced on the day they were issued. By virtue of the Mayday being a high-impact fireground incident, we owe it to ourselves, our families, and our fellow firefighters to make Mayday transmittal and response our sharpest fireground evolution. As firefighters, we train regularly on all aspects of fireground strategy and tactics, emergency medical services (EMS), technical rescue, hazmat, and a wide variety of other important topics. However, simple regular training on your department’s Mayday policy may be the most important evolution you can conduct. 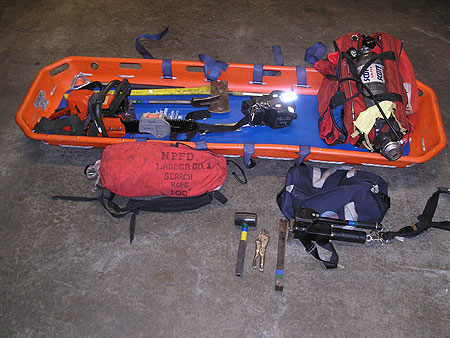 (1) Some of the basic equipment used by a RIT team that may be stowed in a basket stretcher for quick deployment to RIT staging.

Each member must understand the application and format of the fireground Mayday. Although each jurisdiction may nuance particular aspects of the Mayday, the basic structure translates universally throughout the fire service. A Mayday transmission is a distress call used by and for firefighters only. It may be transmitted for a single member or a group of firefighters. There are numerous scenarios where transmittal of a Mayday is appropriate. They include (but are not limited to) the following:

A basic indicator is that if you think you may be in trouble, you probably are in trouble and should initiate a Mayday.

Although each organization may have slight differences in the verbiage of the message, the end result should be immediate acknowledgement of and fireground response to aid a firefighter(s) in distress.

Keeping the Mayday policy instructions and constant location awareness at the forefront of our thoughts will enable firefighters to transmit more detailed and accurate information, ultimately increasing their chances of being rescued by a RIT team or other members operating on the fireground.

Some of the most important basic information, in addition to unit designation, includes the following:

There are several simple and effective methods for maintaining or upgrading firefighter Mayday skills. One way to keep each member thinking about the Mayday format and the information required for a good report is to integrate practice within the daily routine. While conducting routine inspections or picking up from EMS or other responses, members of the company could be stopped by the company officer and given a scenario in which a Mayday must be used. The members would need to quickly translate the information combined with an accurate report of their location into a Mayday message format. This could be transmitted on a secondary radio channel (with prior approval from the communications office) or simply stated out loud. By employing this method, firefighters will develop the skill of taking the information required for a Mayday and organizing it into the context of a Mayday transmission. They will also constantly monitor their position in a structure so an accurate location may be given.

Another system that should be routinely checked is the portable radio emergency or “panic” button feature on many radios. Each radio transmits an identifier that may correspond to an individual member, unit, or riding position. It is important to verify that radios are correctly assigned and functioning properly and that the communications office is aware of the proper steps to take during an activation of this feature. This is not the preferred method used to transmit a Mayday because it does not provide information as to location and condition. However, it may be the only viable option under some circumstances.

Volumes are written and spoken about rapid intervention and Mayday policies each month. But the reality is that to be ready to transit a clear and accurate Mayday in the worst scenario possible firefighters must use the format in practice on a regular basis.

David DeStefano is a 22-year veteran of the North Providence (RI) Fire Department, where he serves as a lieutenant in Ladder Co. 1. He previously served as a lieutenant in Engine 3 and was a firefighter in Ladder 1. He teaches a variety of topics for the Rhode Island Fire Academy. He can be reached at dmd2334@cox.net.