Detroit firefighters responded to almost 7,000 working fires from January to September of 2011, putting them on track to top 9,000 for the year.

That’s about one fire for every 100 residents and doesn’t include EMS, false alarms, or other rescue calls- that’s actual fires. Around 26 a day.

How could an urban city of only 700,000 residents accumulate that many fires? The answer is simply arson. About 95% of the fires in Detroit are purposely set.

In comparison, the nationwide average for arson fires is about 20 per every 100,000 residents. That makes Detroit’s fire- load 50 times that of the national average.

About 85% of Detroit’s arson will be in vacant dwellings. The city has lost a quarter of its population since 2000. A common local joke is – Will the last person to leave Detroit, please shut off the lights.

Most people who live in the suburbs of Detroit have the misconception that the majority of fires in Detroit are started by homeless people trying to stay warm, when that’s only the case in a very small percentage.

The vast majority are purposefully set for a variety of reasons. It’s just another crime that goes unpunished in Detroit.

The city became notorious for arson fires during the riots of the sixties, and especially the “Devil’s Night” years, but the fires have remained consistent and growing as the number of vacants sit for longer periods of time, and fire-bombings have become a part of the culture. It’s used by some as a weapon of revenge, it’s used as entertainment, and it’s used to make a statement.

Throughout the eighties, television brought Detroit’s secret to the masses, and Detroit responded by recruiting volunteers, re-naming Devil’s Night – “Angel’s Night,” and setting up a strategy to combat what had become a given- that every Devil’s Night, Detroit would burn. The efforts worked. The world no longer watches Detroit burn on the night before Halloween.

But the world doesn’t watch the other days of the year either.

Smoke and mirrors have been Detroit’s mode of operation for several decades.

Had the city sincerely wanted to tackle the real problem – vacant dilapidated buildings – they would’ve worried more about demolition and less about Detroit’s image. Volunteers will only stop arson a couple days a year. Demolition would not only help eliminate some of the arson and blight, it would also eliminate some of the urban flight.

It’s like the old fairy tale The Emperor’s New Clothes. Everybody who lives and works here knows what’s going on- but nobody can stand up and say it- or they’ll be crucified. Detroit city government can’t take criticism. They like to call out the Detroit-bashers, the comedians, the press, for “portraying Detroit in a negative light,” when the alternative is to let it walk down the street stark naked- or burn itself down. Detroit government chooses to let it burn.

Instead of spending precious tax-dollars on public relations to try and change how the rest of the world viewed it, Detroit should have been worried about how their taxpayers viewed it, because they’re the ones who were paying the bills. Now, nobody does and Detroit is facing the very real possibility of an Emergency Manager.

Detroit firefighters usually go to at least one working fire a shift, many go to five or six. On a night like the Fourth of July, (“the new Devil’s night”) even the slowest companies may get 8-10 fires in a 24 hour shift with only a twenty-minute rehab between them. 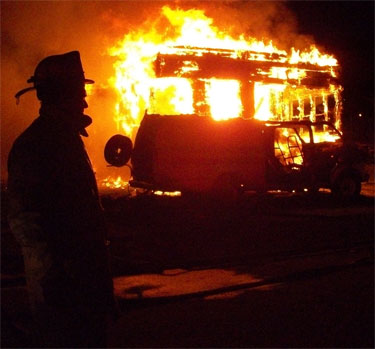 Their bunker gear has holes, tears and missing pieces. When they take it in to be repaired, they either don’t have anything to replace it with, or used gear is often provided. Waiting for repairs can take months. Some rigs have over 200,000 miles. Most companies still use axes on the roof, and only one out of four firefighters will have a radio with them in a fire.

The average age of a Detroit firefighter is around 44 years old. The last few classes used recycled city workers. As city government is downsized and positions are eliminated, instead of being laid off, workers are given the opportunity to transfer to the fire department. Sounds like a good way to save jobs, unless you’re a tired, worn- out 50-year-old still fighting fires with no young blood to take up the slack.

The city routinely browns-out, or temporarily closes companies, increasing response times and leaving its residents vulnerable. Some companies have been browned out since 2005, going in service only for the three days around Halloween. Others work on a DFD roulette, alternating closings, two open, two closed. The Engine might be closed, but the ladder truck will be there. Firefighters take the blame from residents who lose their homes, or worse, their loved ones, when they happen to live in a browned-out area.

And while the firefighters battle the blazes, night after night, suffer the injuries, and occasionally, but too often, go to funerals, they also have an empathy and understanding about why Detroit burns.

If you drive through the neighborhoods of Southwest Detroit, Brightmoor, and the East-Side, you will find a burned home on almost every block. Most have several. Some neighborhoods are already gone- the arson sweeping down the block like a decade long wildfire. How does a city find the money to tear down 80,000 buildings? They don’t.

For the child who lives next door to a burned out, vacant, dilapidated house, where is their security? Detroit doesn’t have enough police to respond to calls for trespassers, or squatters, even though their residents pay enough property taxes to expect it. The buildings and homes aren’t boarded up, or secured- even when they’re within a block of a school.

Young girls and women are raped in these vacant homes and buildings all the time. Bodies are dumped in them. Often firefighters find bodies while putting out fires. The vacants are not secure and neither are Detroit’s residents that continue to flock to the suburbs every chance they get. The ones that can’t leave, the ones who have children, face a moral dilemma.

If they burn the house, their kids might be safer. If you’re weighing the pros and the cons- weigh this – most arsonists in Detroit are never caught. Unless someone dies, many won’t serve time even if caught. The arsonist that set the fire that killed S.F.F. Walter Harris will only serve about 17 years. The owners of the house paid him $20 to set the blaze.

The FBI listed Detroit’s 2010 arson numbers at 1,082. Detroit’s actual arson numbers are easily six times that. The discrepancy lies in the fact that the only ones counted are the ones that are investigated by arson investigators and deemed arson. Because Detroit has such a large volume of fires, they can’t investigate all suspicious fires. They have to prioritize by which fires injured someone, or caused damage to personal property, against which ones were simply the arson of long vacant homes.

Detroit firefighters are currently being asked to take a 10% pay cut. They’re also facing increased medical insurance costs, less days off, and an uncertain future regarding layoffs, contracts and pensions. But through it all, the one thing that carries them through, is the knowledge that they are in a league all their own, and the camaraderie that goes with that.

The sheer volume of dwelling fires- one per every 100 residents- gives them an experience so unique, that other fire departments go there to see how they do it. They go to see a well-oiled machine. Like anything you do, the more you do it, the more comfortable you will be doing it. What once seemed impossible, will become second nature if you do it often enough. Pride is the DFD’s morale booster. 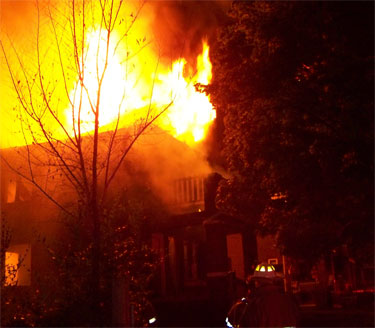 With repetition brings familiarity. So, when outsiders watch the DFD work, and criticize how Detroit doesn’t always “follow the book,” what they don’t realize, is that the book is sometimes for the guys who won’t get the experience Detroit does. You can’t teach experience.

At the end of the day, would you rather be operated on by the doctor who has done the surgery 10,000 times, or the one who read the book and passed the written test? Fighting fire has become second nature and yet they continuously learn from their experiences. And you can’t argue with the results.

Every loss of life is too much, but if you look at the number of fires combined with the conditions of the structures, it’s rather a miracle that the DFD don’t lose more. (knock wood)

And while the DFD know that they have invaluable experience, they do still yearn to be the best in all areas. They want the specialized training to be available to them, but it’s not, not to the degree an international border crossing should be. Detroit has miles of waterway, an international bridge crossing and an international tunnel, yet not only do they not offer its firefighters trench and river rescue training, but they won’t sponsor their own people even if they pay out of pocket.

Some believe that specialized training isn’t offered as a deliberate way to break Detroit’s seniority system. Right now, Detroit promotes strictly based on seniority. Opponents argue that’s not the best process, that people are promoted who aren’t qualified. But if the training’s not offered, whose fault is that? And in a city like Detroit, anything other than a seniority system would end in a jobs grab for the well-connected.

If you ask a Detroit firefighter how many fires they’ve worked in their career, you’ll get a laugh. The numbers are too high to remember and few ever thought to write them all down. Most couldn’t tell you how many they had last week.

More than a few times, DFD members have assisted with fires when they weren’t even working. Sgt. Dennis Dooley saved six people when he noticed a house fire on his way to work. FF Don Adams saved three on another day.

It’s common for firefighters to let each other know pertinent information about the house fires they work – like where the stairs are for the next time.

All over the United States, cities are in desperate economic crisis and many will cut public service to make up for a lost tax-base. Many fire departments are facing layoffs and downsizing.

But those cities need to take note of what’s happened in Detroit and realize that it can happen to them. You can’t sacrifice the safety of your residents in order to save the entitlements of a few. If cities don’t provide their residents with a safe and protected place to live – police and fire- they’ll leave one way or another. How will that improve the tax base?

Eventually, the Motor-city wildfire will end. But what will be left?

Concerned parents and neighborhood vigilantes aren’t the only ones burning Detroit. If there’s one thing that Detroit deserves to be bashed for it’s the acceptance of fire as a weapon.

Firebombing a rival, or enemies’ home, is a daily occurrence in Detroit. That’s more than a bad economy, it’s worse than neighborhood neglect, it’s a culture that can’t be rooted out until it’s acknowledged. And unfortunately, Detroit still likes the emperor’s new clothes.