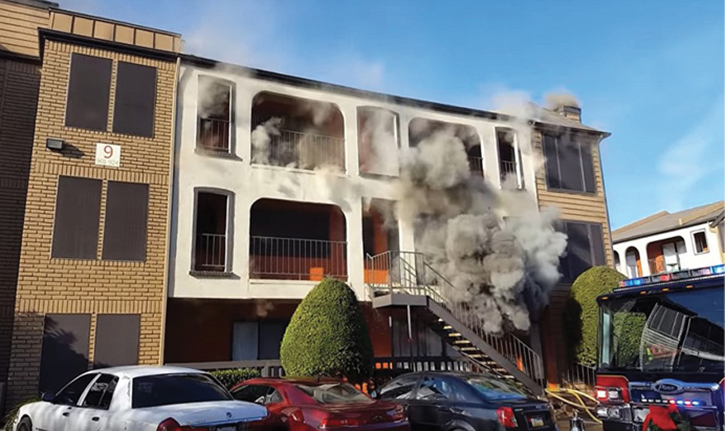 For many years, fire service members have been debating over the three fireground phenomena: flashover, backdraft, and smoke explosion. Modern technology allows us to view examples of these phenomena through online video footage and educational fire blogs. Sometimes, it can be difficult to differentiate one event from the other, hence the debates.

Fire Triangle, You Say? The Fire Decagon and Fire Behavior

It’s also important to understand where flashover, backdraft, and smoke explosion occur within the modern stages of the “fire bell curve” (Figure 1). This article reviews the definitions of each trigger event for clarity. Understandably, definitions can differ slightly from one resource to another. 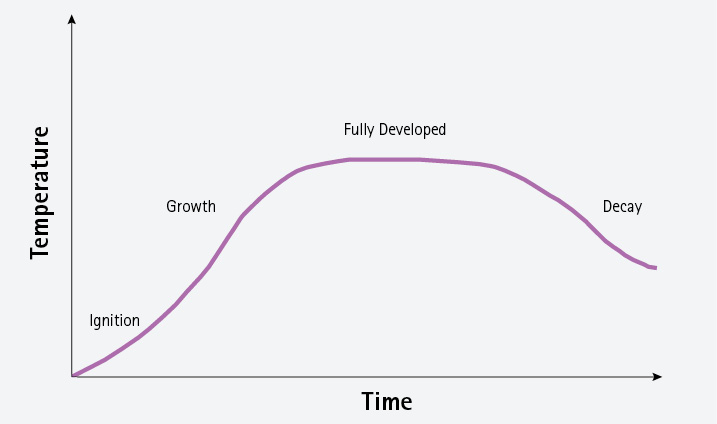 This is the transition phase in the development of a contained fire where surfaces that are exposed to the thermal radiation from fire gases in excess of 1,112°F (600°C) reach an ignition temperature (more or less) simultaneously and spread fire rapidly through the space. As shown in photo 1, flashover is achieved in a much shorter time using modern furnishings as compared to legacy furnishings.

According to the National Institute of Standards and Technology (NIST), this is the most dangerous stage of fire development. Flashover occurs between the growth and fully developed stages of burning, primarily. However, flashover may also be possible during the decay stage, when oxygen (O2) is consumed but hot gases remain. The introduction of air can trigger these hot gases to ignite and flash over. 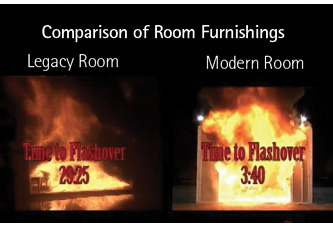 The NFPA recognizes the following characteristics of flashover:

Firefighters are trained to recognize the signs that flashover is about to occur—i.e., dense black smoke with tightly packed curls (“black fire”), dense black smoke that pushes out of a doorway or window opening, or smoke that has accumulated at doorknob-height level with the fire seen below.

As per NIST, this is a rapid deflagration (explosion) following the introduction of O2 into a compartment filled with accumulated unburned fuel. Backdraft occurs within the decay stage of burning.

The NFPA recognizes the following characteristics of a backdraft:

This occurs when unburned pyrolysis products and flammable products of combustion accumulate and mix with air, forming a flammable mixture and introducing a source of ignition that results in a violent explosion of the premixed fuel gases and air.

It is very difficult to predict a smoke explosion. However, the following indicators point to the potential for this phenomenon to occur: 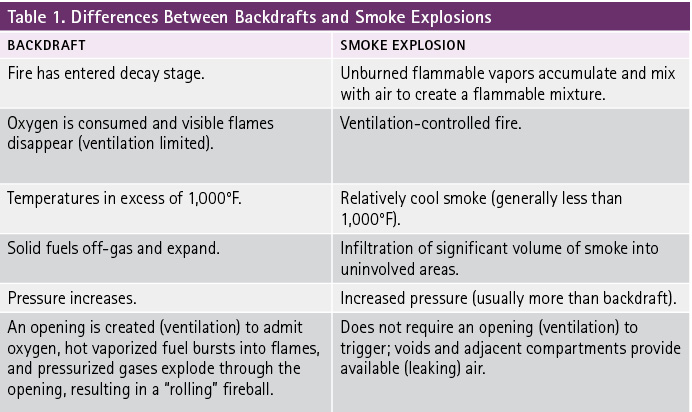 (2) A smoke explosion at an apartment fire in Texas. (Photo courtesy of Joe Montalbano.)

A smoke explosion is basically a relatively cold-smoke environment in which flammable vapors (smoke) have collected significantly in voids or an adjacent compartment from the fire area. A smoke explosion does not require us to make an opening on the perimeter to create ventilation; it gets its air through leaking air that seeps into the space or is readily available in the compartment and void spaces.

Think about an investigation call for a haze of smoke. The haze is cold smoke, but the mixture of smoke and air is probably pretty close to the flammable range, absent an ignition source. Firefighters tend to feel safe in this type of smoke environment because of good visibility, and usually they are not masked up, but it has the potential to blow in the presence of an ignition source if vapors are within the flammable range. 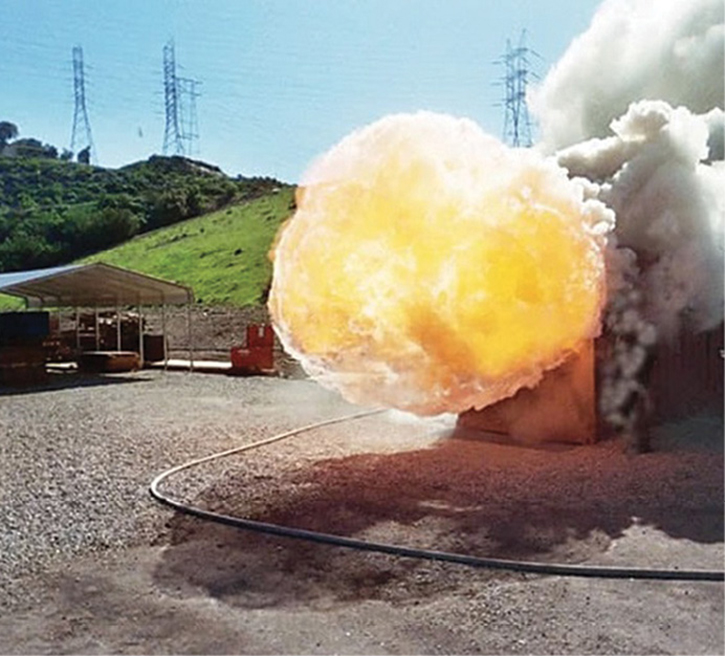 (3) This backdraft occurred during a test in a burn container. (Photo courtesy of Dräger, Inc.)

A smoke explosion is more difficult to predict than a backdraft. However, by following the modern firefighting principles identified through scientific studies provided by NIST and Underwriters Laboratories, we can reduce the likelihood of trigger events like flashover and backdraft by effectively cooling the environment with a sufficient volume of water as quickly as possible, followed by effective and cautious ventilation to clear accumulated smoke and flammable vapors.

Regardless of the ventilation method you use (vertical or horizontal), consider the best method for the fire you’re on to cautiously ventilate and control the environment as safely as possible and to prevent the trigger event from occurring.

Although each of the outlined trigger events is dangerous to firefighters, the flashover continues to be the most frequent and most dangerous event firefighters can encounter. The debates will continue; perhaps the only way to truly know which type of event occurred on any given fireground is through an independent analysis.

Science continues to do its part to bring clarity to better understand these phenomena. Nevertheless, it is extremely important for firefighters to know and understand each of these three phenomena so they can identify them and their characteristics on the fireground and be familiar with the proper methods available to combat them and to limit their potential.

NICK J. SALAMEH is a 36-year fire service veteran. He was a fire/emergency medical services captain II and was previously a training program manager for the Arlington County (VA) Fire Department, with which he served 31 years. Salameh is also a former chair of the Northern Virginia Fire Department Training Committee. He is a contributor to Fire Engineering and Stop Believing; Start Knowing.