On August 8, 2018, the Virginia Beach (VA) Fire Department (VBFD) encountered a near miss while operating at a residential structure fire. The fire occurred in the Arrowhead section of the city primarily known for its quiet bedroom-style community. The homes were built in the early 1960s and are typically around 2,000 square feet. This particular house was a two-story, single-family home with an attached garage and a fenced-in backyard. 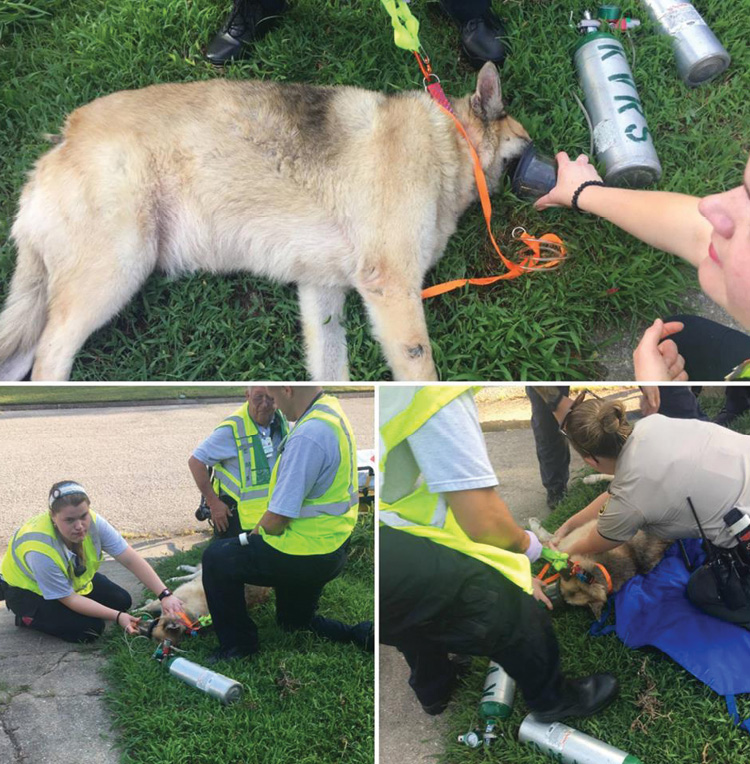 07:21:25: The Virginia Beach communications center notified Battalion (B) 5, Engine (E) 9, E7, E10, Norfolk E4 (automatic aid from a bordering city), Ladder (L) 7, Rescue (R) 2, and Ambulance (A) 923 of a residential fire at 5704 Paiute Road. Further updates stated, “Complainant sees smoke pouring out of the upper level of the house with no flames seen.” Another caller from next door stated, “The house is blazing, the owner is not home, and two shepherds are inside.” The last caller reported, “Unknown if anyone was still in the home.”

07:26:32: E9 and B5 arrived on scene. E9 reported, “A two-story, single-family residence with smoke showing from the second-floor windows and the roof vent on the delta side.” E9 declared a “working fire.” With the declaration of “working fire,” the dispatcher added the next closest heavy fire apparatus, L10, the shift safety officer, an emergency medical services (EMS) supervisor, and the shift commander. B5 established Paiute command on the alpha side of the structure. E9’s officer instructed his crew to pull a 1¾-inch handline to the front door while he completed a 360° size-up and noticed charged smoke coming from the second floor, primarily in the C/D corner of the residence. E9’s crew forced entry into the front door in an offensive fire attack mode and encountered charged smoke from floor to ceiling.

07:28:15: E7 arrived on scene and was assigned water supply. The closest hydrant was approximately 50 feet in front of E9. E7’s driver was able to make this connection, and the remaining two crew members were assigned to pull a second attack line for E9.

07:29:22: E10 arrived on scene and was assigned a primary search on the first floor. During this search, two large German shepherds were found. Both dogs were brought outside and turned over to a nearby crew for assessment. One shepherd was still breathing with difficulty; a VBFD pet oxygen mask was applied. The dog was later turned over to EMS and animal control for transport to an emergency vet. E10 continued the search of the first floor; there were no other findings.

07:31:36: R2 and L7 arrived on scene. R2’s crew was assigned a primary search on the second floor, and L7’s crew was assigned to ladder the exterior. E9 reported the interior stairs had been compromised and they could not make the second floor. E9 attempted to bring a roof ladder interior to span the missing section of the stairwell but without success. R2’s crew was in the process of “softening the building” and gaining a means of egress to the second floor from the exterior. Ladders were thrown to the roof of the garage, which gave great access to what appeared to be the fire room through a window. Norfolk E4 stretched a 1¾-inch handline to the roof where R2 and L7 made entry through a D-side window for search and fire attack. Crews working on the second floor encountered moderate heat and heavy smoke conditions while L7 was trying to find fire and R2 was performing a primary search. The second floor was searched room to room while the firefighters concurrently checked the attic space. 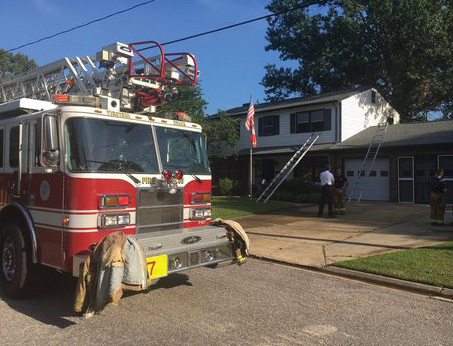 07:30:00: While E9’s crew was searching for fire on the first floor, the officer of E9 started up the stairwell. He made it halfway up when the stairs became unstable and he fell through the stairs to the first floor of the structure in the pantry area. The officer was able to call out to his crew members for assistance in extinguishing the fire around him. He was then able to walk out of the pantry. The officer considered calling a Mayday, but it was not necessary because he was able to self-rescue.

07:38:22: During the primary search on the second floor, a member from R2 encountered two 20-pound propane cylinders. These grill-type cylinders were in a bedroom on the C/D side of the structure, close to a closet. One of the cylinders had a hose connected to the main valve and propane gas discharging from the hose. This raised the first red flag for this incident. The tank with the hose became the largest priority and was immediately closed while carried to the window for removal from the structure. The officer of R2 observed the action of his member and followed with the second cylinder. Both propane cylinders were safely removed from the structure, and command was notified of the found hazards. Primary searches of the second floor were completed; no occupants or pets were found. L7 completed searching for fire in the attic. None was found.

07:46:18: E10 completed a secondary search on the first floor after positive-pressure ventilation. No occupants or pets were found. One additional propane tank was discovered in the garage toward the A side of the building. This cylinder had a heat lamp attached to the valve, which was in the open position. This was out of the ordinary since the summertime temperature at the time of the fire was in the 80s. 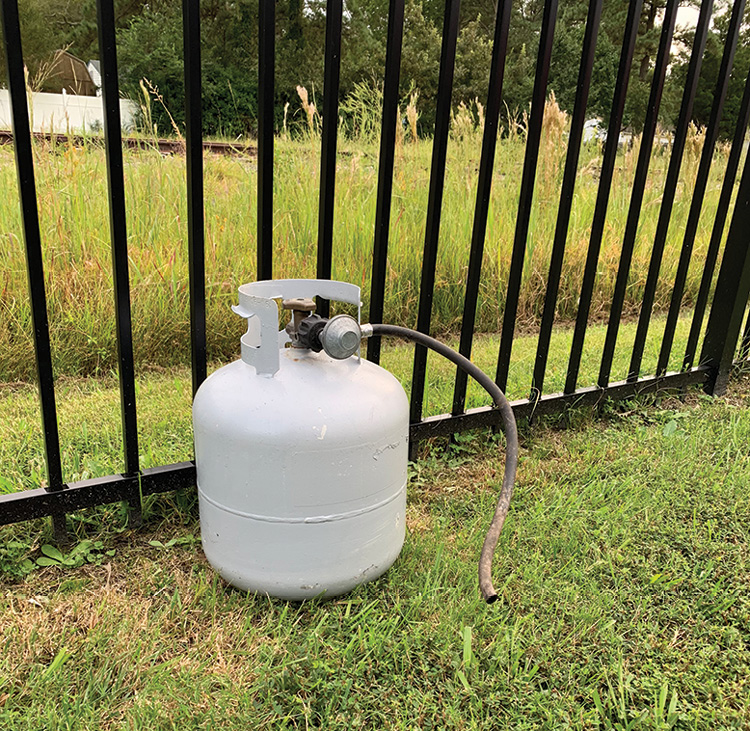 (3) This propane tank had a hose attached to override the safety valve on the 20-pound cylinder. (Photo by Ian Poole, Virginia Beach Master Firefighter.)

Propane gas has a vapor density of 1.6, making it heavier than air, causing it to sink to low-lying areas, increasing the danger for crews working on the first and second floors. The explosive range of propane is 2.1 to 9.5 percent with an expansion ratio of 270 cubic feet (ft3) of gas for every 1 ft3 of liquid. “This rapid conversion from the liquid state to the gaseous state is accompanied by a visible vapor cloud, which results from the contact of the extremely cold vapors of propane with the air.”1

The scene was turned over to VBFD investigators for determination of cause and origin. The investigators reached an occupant by cell phone and notified him of the fire. The occupant was concerned about his dogs and stated that he and his wife would be en route to the home from the Virginia Beach oceanfront area, about 16 miles east of the fire location.

09:54:23: E11, E3, and A1428 were dispatched to a single-vehicle accident westbound on interstate 264. The caller was eastbound and stated that he saw a vehicle headed westbound strike the center jersey barrier, hit hard, and bounce around and that he appeared to be a male driver.

10:04:00: E11 arrived on scene to find two people unconscious inside the vehicle. The vehicle was still in drive and running. The male driver was restrained. The female passenger was unrestrained. The vehicle was placed in park and turned off. When access to the patient compartment was made, a gun was noticed between the legs of the female passenger. The state police trooper on scene was made aware. The gun was removed from the vehicle and placed on the topside of the truck’s bed. Personnel working on the scene were made aware of the weapon and instructed to stay away from it. The female passenger was removed from the vehicle; a large amount of blood was noticed on the seat that “did not coincide with the type of accident.” The female patient was transferred to the back of the ambulance, where she was pronounced deceased as the result of a self-inflicted gunshot wound. The male driver was pronounced deceased from a gunshot wound and was left in place for police investigation.

The two occupants were later identified and related to the fire on Paiute Road.

Dillon L. Dextradeur is a master firefighter/paramedic with the Virginia Beach (VA) Fire Department, where he is assigned to Rescue 2 on the technical rescue team. He has been in the career fire service since 2011 and was previously assigned to busy engine and ladder companies. He is a rescue specialist on VA-TF2 US&R team, nationally registered paramedic, field training officer, FEMA-certified structural collapse technician instructor, and Virginia Fire Instructor I. He has an associate degree in emergency medical services.