Several years ago, while we were assigned to one of our busier ladder companies, my friend Mike Gregorio and I decided to drive a few hours to attend a class on truck company operations hosted by the Westerville (OH) Fire Department with Chief John Mittendorf as the instructor.

Prior to training, Mike and I were in the firehouse talking about how excited we were to be attending the class when someone who had a number of years on the department asked us why we were going. At the time, we had been firefighters for about seven of eight years, and this “old guy’s” reason for asking was based on the philosophy that everything we needed to know we “learned in firefighter training”! Suffice it to say, we ignored this “seasoned” veteran, attended the class, and learned a great deal about how to be more effective as truck company firefighters.

Fast forward to my (now) 25th year as a firefighter, and I am now the “old guy.” However, my zeal for learning has never waned, and I normally attend three or four week-long classes on various subjects annually, from hazardous materials to fire or technical rescue training. In my travels across the country as an instructor and a student, I have noticed that training and drills are not as important to us as they used to be. In many fire departments, not only are the routine fire runs part and parcel of the day, but emergency medical services runs, life safety inspections, hydrant servicing, and so on eat up a lot of time, and we cannot get it all done.

When Mike and I left the truck company, we each went to one of our two heavy rescues. My driver on the heavy rescue had, at the time, more than 30 years on the job; he was an excellent rescue guy and had forgotten more about firefighting than I would ever learn, no matter how many classes I attended. He used to speak of the “dumbing down” of the fire department and the fire service in general, and it took me a few years to understand what he was saying. It was not just about lowering standards for candidates but our current members’ lack of desire to learn more—to not just settle for the status quo or show up—but to contribute, be better, and not just look for a paycheck.

In my time on the job, I have been afforded great opportunities to attend classes to better myself as a firefighter and to expand my knowledge base. Many of the classes that are available to us as emergency responders are now sponsored and paid for by the federal government and are free such as the classes held in Anniston, Alabama; Socorro, New Mexico; Las Vegas, Nevada; and Pueblo, Colorado. Other classes, at times, have costs associated with them when you factor in tuition, room and board, travel, and so on. In the last 25 years, I have spent out of pocket a decent amount of money for training, and I have found that every class was well worth it.

The days of out-of-pocket spending have passed because of government funded training, but when I have talked to firefighters about going with me to sessions, I have heard more than once that, “If the fire department isn’t going to pay me for it, why should I go?” or, “I would go, but I do not want to use my vacation time, holiday time, or trade time since the department won’t cover me.”

The question is, are these valid reasons? In my opinion, anything that is going to make me better at what I do and may possibly help me save the life of a civilian, another firefighter, or myself is well worth the time and money, whether the department pays for it or not.

An Amtrak Northeast Regional train travelling from Washington, D.C., bound for New York City derailed in Philadelphia, Pennsylvania, on May 12, 2015. The crash resulted in eight dead and 200 injured.

In October 2015, I attended a class that was well worth the out-of-pocket costs for travel, room, and board. Before taking this class, I asked myself the following questions:

If you can answer the above four questions with a planned response in mind, the right equipment, staffing, mutual aid agreements, and knowledge of the railroad, you are way ahead of the game.

Personally, I never gave this scenario much thought until after the accident. However, when I looked through my department’s operations manual, I found info that covered freight only. Not only was it lacking in passenger rail information but the procedures had not been updated in 25 years.

The Code of Federal Regulations 49CFR239 provides guidance for operations at passenger rail emergencies. AMTRAK’s office of emergency preparedness in conjunction with the Meridian Public Safety Training Facility (MPSTF) in Meridian, Mississippi, offers a week-long course every October on passenger train emergency response and rescue (PTER) that will either 1) Augment your response to passenger train emergencies if you have a procedure, or 2) Give your department much to think about regarding writing a procedure for these types of incidents.

Among the topics covered are case studies, responding to incidents, the hazardous conditions associated with passenger rail or any rail response, onboard emergency equipment, the challenges of extrication from a locomotive or passenger railcar, and even rail schedules nationwide.

When you drive onto the training site, the first thing you are greeted by is a decommissioned locomotive and dining car into a vehicle for a car vs. train scenario (photo 2).

The classroom work is designed to teach railroad safety, terminology, and operations beneficial for all rail incidents. For example, when at a rail incident, how do you contact the railroad, and what information do they need to make the area safe for emergency operations?

For directions, highway mile marker posts or street names mean nothing to a railroad dispatcher. However, the sign on the communication hut in photo 2 (or somewhere in proximity to the event) provides first responders with the information necessary for the railroad to respond. 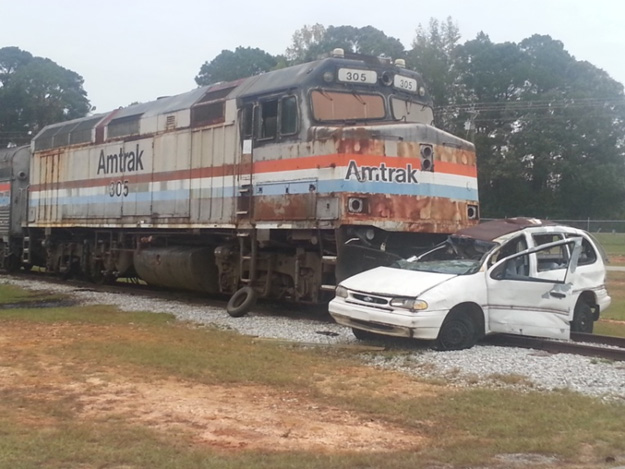 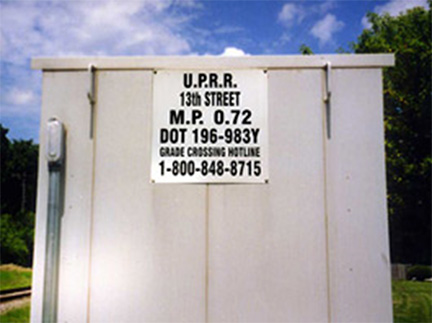 Union Pacific Railroad is the owner of the line located at the 13th Street mile post 0.72. (The mile post is the important address because it provides geographic distance from the railroads starting point.) The Department of Transportation number will always have six digits and a letter and provides the type of crossing grade, and the hotline to reach the owner of the railline will be prominently displayed.

Once on the training ground, work will be centered on the four railcars of a passenger train with two upright cars one of which is a locomotive, one car on its side, and one car partially down a ravine on its side. Rescue strategies and tactics with an emphasis on packaging, ropes, and confined space rescue are the order of the day for all five days of class (photos 3-5 by Charles Cox). 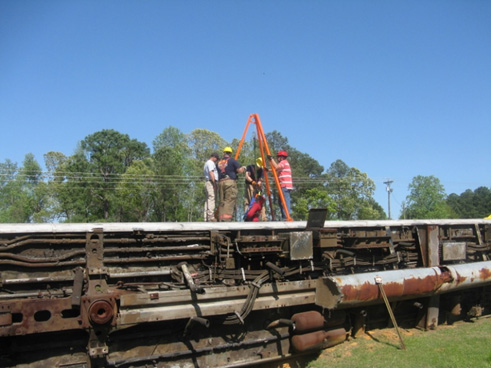 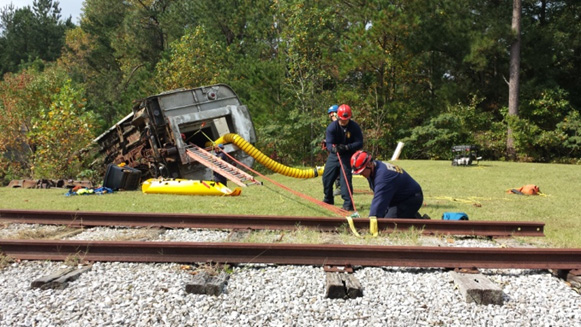 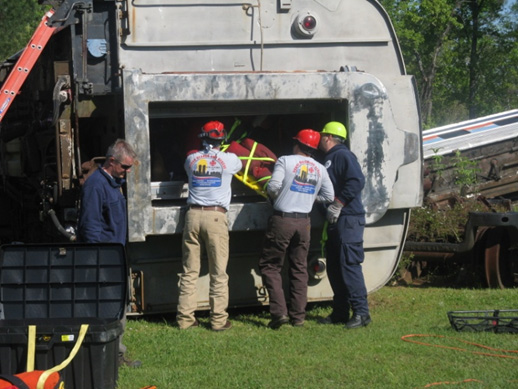 The culmination of the class is a nighttime full-scale train derailment with real victims as well as mannequins. The addition of local fire department participation and real-world problems with staffing, resources, and material make this an extremely realistic scene. The training does not end until every victim is accounted for.

The AMTRAK passenger emergency response training is just one of a myriad of classes that are provided to first responders that help us become or remain educated. The days of only fighting fires are long gone.

Every fire department in the country—volunteer or career—is being asked to do more with less of everything. What may make the difference in our safety and response, regardless of the incident, is good, solid, practical training. The training is out there and much of it is government sponsored meaning that it is free. The impetus to find training is not on the fire administration; they are not on the frontlines. We are! It is up to us to determine what steps we are willing to take to be the best we can be, to have a long career, and to eventually become the old guy.

Anyone with any time in the fire service will tell you that it goes by very fast; you turn around twice and it’s time to retire. However, just because you are close to retirement doesn’t mean the education stops. You must avoid any firefighter who thinks he knows it all, has seen it all, and has learned it all in initial firefighter training because he is a danger to himself and others.

Some pursue higher education through secular institutions as well as classes in hazmat, technical rescue, EMS, and so on. But whatever the discipline and however much time you have in the fire service, remember that education does not stop! As an instructor, I have learned as much from my students as I have as a student, but ALL of it is education.

Take advantage of the classes—free or not—if they will help you. Start or continue drilling regularly at the firehouse. Brainstorm around the kitchen table about the runs you make, your inspections, or your hydrant checks and how we would handle a particular emergency situation.

If a rail line runs through your jurisdiction and you are familiar with what to do and (more importantly) what not to do in the event of Philadelphia occur. Let’s stop the “dumbing down” of the fire service. Let’s have the same excitement for learning that we did the day we got this job.

And last, let’s not forget to share what we have learned with those coming after us. The fire service has been here for 200 years, and it will continue on after we have retired, but it is up to the old guys to pass on what they have learned to the next generation of firefighters so that when that generation is the old guys, they won’t forget that education doesn’t stop.

For more information on the class mentioned in this article, contact Doug Stephens at douglasstephens@meridianms.org or call (601) 484-6890.

Bobby Shelton is a firefighter/paramedic in Southwest Ohio, where he has served on a heavy rescue company with his department for eight years. He is the owner of Life–Line Solutions, a Cincinnati, Ohio,-based safety training company. He has a bachelor of science degree in emergency management. Shelton also serves as a member of the NFPA 1991 and 1041 committees and is a hazardous materials instructor for the International Association of Fire Fighters.