The means of applying water has made remarkable progress over the years, from the leather buckets used in the 17th century to the nozzles we use today. The progression of firefighting nozzles has led fire departments to have many different options for their attack lines. It is imperative for crews to thoroughly understand these types of nozzles, their working components, their maintenance (according to manufacturer recommendations), how the stream looks, the nozzle’s reaction when charged to the correct operating pressure, and what to do when something causes it to malfunction.

Through no fault of their own, crews oftentimes practice advancing a line forward in a wide open area to drill on moving the line and flowing water toward an objective. Although engine crews should practice this drill regularly, they should also drill on situations that may go wrong while operating hoselines. According to Task Force Tips’ A Firefighter’s Guide to Nozzles [p.28 (2001)], “Stones, gaskets, tank scale, etc., can all seriously affect the operation of the nozzle.” Overcoming a nozzle malfunction is a scenario that you should address in a training environment before it happens on the fireground. 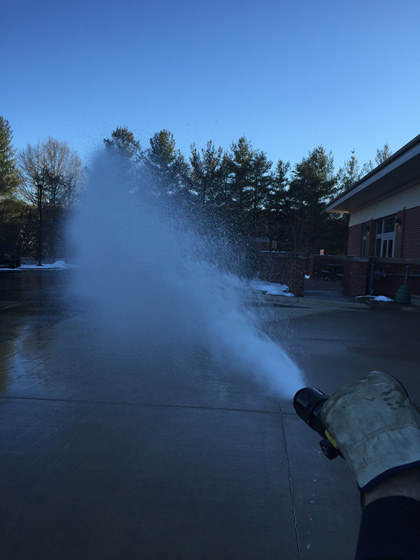 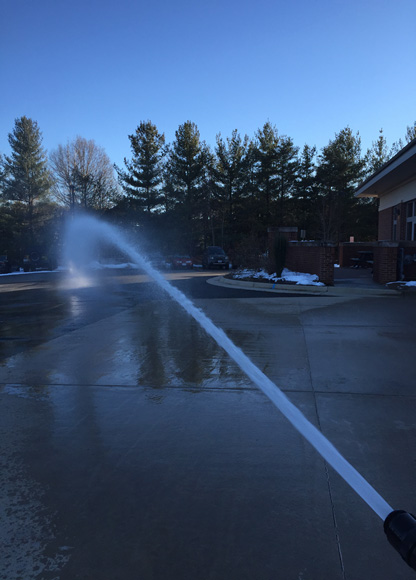 (1, 2) A smooth bore slug tip flowing water with a 1½-inch gasket stuck in the strainer. You can clearly see how disrupted the stream is and how water flow has been reduced. (Photos by author unless otherwise noted.)

The first-arriving engine company is operating at a fire on the second floor of a residential, single-family home.  The engine is staffed with three personnel including the driver. The nozzle firefighter advances up to the second floor, proceeds down the hallway, and locates the fire in the master bedroom. As the nozzle firefighter opens the bail and begins to attack the fire, he feels a sudden jolt, followed by a reduction in the hose stream. The nozzle firefighter has been presented with a nozzle issue and needs to react quickly before the fire overwhelms the crews operating on the fire floor. Following are the proper ways to approach the situation:

Recognize the issue. Small pieces of rock, debris, worn gaskets, and engine scale have the potential to get caught in the nozzle and disrupt water flow. If there’s an object in the line that is large enough to clog the nozzle, the nozzle firefighter will feel a sudden jolt and notice a reduction in fire flow. However, if the pieces of debris in the line are small, you may only notice a reduction of fire flow and in nozzle reaction. The nozzle firefighter may not be able to see an inadequate stream while engaging in fire attack. He must be in tune with how the nozzle feels under normal conditions as well as when there is a malfunction. Any debris caught in the nozzle will reduce the gallons-per-minute flow and result in a reduction in nozzle reaction. The firefighter must recognize this issue and handle it promptly.

Fall back to a safe area. Crews should not operate in the fire area with inadequate fire flow. While falling back into an area of refuge, the nozzle firefighter should continue to flow water toward the fire. (Note: Moving a line backward and flowing water can prove to be a difficult task. It takes skill and coordination among members on the hoseline. Crews must practice this skill before they encounter it on the fireground.) The nozzle firefighter should control the door, if possible, once he has exited the fire room. Closing the door will protect firefighters from the fire flow path and will aid in limiting oxygen to the fire.

Inform command of the issue. The officer in charge of the line needs to communicate to command that there is an issue with the nozzle and that the attack line crew is retreating to a safe area. Commence radio traffic following your departments standard operating procedures, and relay the information over the radio as priority—or urgent—traffic. If the nozzle malfunction cannot be resolved, crews should evacuate the fire floor immediately and decide on an alternative plan. 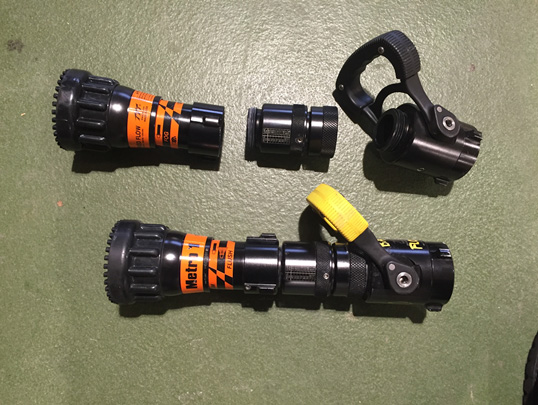 (3) Knowing the working components of the nozzle is important for anyone who operates on an attack line. Here, there are two different options for streams: combination fog nozzle and smooth bore slug tip with a stream shaper. Know what can get caught in the nozzle and what you can do to overcome it.

Smooth bore. Smooth bores are the oldest type of nozzle in the fire service. Unlike combination nozzles, debris is less likely to get caught and inhibit water flow in smooth bore nozzles. This is why smooth bore nozzles are commonly found on high-rise hose loads. In an environment where every bit of pressure matters and there is a potential of standpipes being compromised by debris, the smooth bore nozzle works well because debris can flow out of the orifice without hindering operations.

Combination. Whether you are using automatic or constant gallonage combination nozzles, the potential for debris hindering nozzle operations is comparable in both. Fog nozzles have a flush capability that will expel small particles of debris from the fog nozzle. Some nozzle manufacturers offer fog nozzles with a bail shutoff with a detachable, rotating shutoff fog tip. These nozzles allow operators to turn off the bail, extend the desired sections of additional hose from the bail, and put the fog tip back on to the end of the line. The operator can open and close the nozzle by rotating the collar to the desired position. 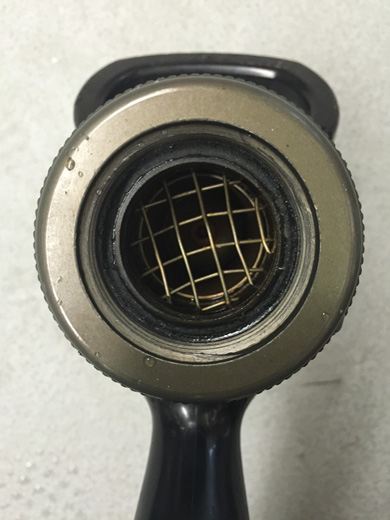 (4) Nozzle bails are often equipped with metal inlet screens. These are designed to keep hose gaskets and other debris out of the nozzle. Unfortunately, if something clogs this entire screen, the line will need to be shut down to clear it out. [Photo by Pennsauken (NJ) Fire Department Firefighter Ryan Madden.]

Sometimes, departments will add stream shapers behind the smooth bore tip; this is another variable in the nozzle that could catch debris. In most cases, debris that fits through the shaper can be flushed out of the nozzle. If debris does not fit through the stream shaper and it is stuck inside it, take off the combination nozzle and the smooth bore tip from the bail, add the combination nozzle back on to the bail, and reengage the fire attack.

Another nozzle feature you will find is metal inlet screens behind the nozzle bail. These are designed to stop gaskets and other small pieces of debris from entering the nozzle. If your nozzle has this feature, you will not be able to unclog the screen unless you shut down the entire line and take the nozzle off the attack line. Do not do this while engaged in fire attack.

The last piece you may find on nozzles is a lock screw. This is designed to keep the nozzle operator from removing nozzle components from the thread. Depending on where these are on the nozzle, you will not be able to perform any operation other than flushing the fog nozzle of debris. 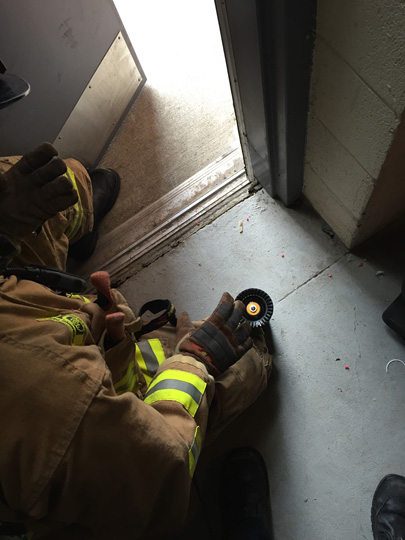 (5) The nozzle firefighter keeps the combination nozzle tip close in the immediately dangerous to life and health environment This will allow the firefighter to follow his leg back down to the nozzle to reattach it to the bail. This is important because of  the lack of visibility.

It is essential for crews to work through problems together in a training environment. The more issues/drills we can create to ensure crews operate efficiently, the better. Although there is a lot of safety put into engines and hoselines that may prevent these issues from happening, it is still a possibility, and firefighters need to be ready to handle the problems they are dealt. The key point is—review your nozzles and understand how every piece functions. Dissect your nozzles, take them apart, reassemble them, and be able to do it with your eyes closed.

Author’s note: Special thanks to Lt. Jarrod Sergi of Norfolk (VA) Fire and Rescue, Lt. David Caruana and Technician II Paul Racco of Prince William County (VA) Department of Fire and Rescue (PWCDFR), and the rest of the PWCDFR crews at Fire Station 10 for their help with this article.

Andrew Hale is a technician II that has served the community of Prince William County, Virginia, for the past five years. He is assigned to Prince William County (VA) Department Fire and Rescue’s Engine 523. Hale is working on his bachelor’s degree in fire administration at Columbia Southern University and assists at the academy with Firefighter I and II and technical rescue classes. He is also a volunteer Virginia Department of Fire Programs level II instructor. Hale can be reached at ahale90@yahoo.com.

Chemical Suicide: 10 Seconds Can Save Your Life