By Howard Rinewalt and Jason Hearnsberger

You receive a report of a residential fire in your territory. As the responding chief officer or company officer, you have many critical factors to evaluate and decisions to make. What is the deployment, what are the weather and traffic conditions, and what information can dispatch provide?

You find a working structure fire on arrival. You need to gather additional information, perform tasks, make decisions, and fill a considerable number of roles: perform the size-up, take a 360° survey, determine the mode (offensive or defensive), identify/protect exposures, set up the initial/subsequent rapid intervention teams, put the primary attack line into operation, provide accountability, initiate the primary search, set up the water supply, get a backup line in action, address utilities, consider ventilation, determine if emergency medical services are needed, set up staging, designate an incident safety officer, make division assignments, set up salvage, and the list goes on. 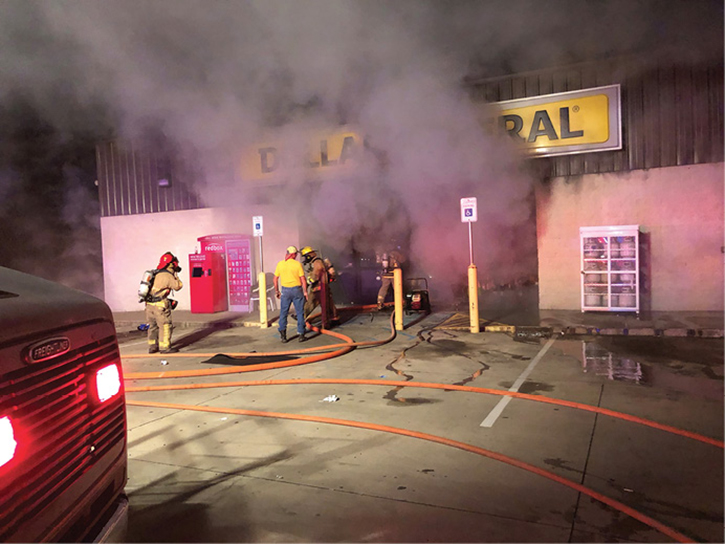 (1) Using stack-up crews in buildings with shelves will prevent the line from snagging and pulling down live interior loads on top of the line. (Photo by Logan Dominy.)

With so many tasks to fill, often the standard practice is to assign one engine or truck crew to an individual task or role and look to fill the next most pressing role. In some cases, you may even split a crew, if staffing is sufficient, to try to achieve two tasks simultaneously.

“Engine 1: Deploy a line through the Alpha door for fire attack; fire on the second floor. Truck 1: Give me a primary. Engine 2: Establish a water supply to Engine 1; you will be my on deck. Engine 2 Driver: You will be Accountability, A side. Engine 3: Deploy a backup line, Alpha side. Truck 2: Get my utilities and prepare to cut a hole. Chief 2: Head to the Charlie side for Division C. Med 1: Stage near Truck 1.”

Despite these challenges, we must focus on getting water on the fire expeditiously. Fire behavior research has demonstrated time and time again that fires are growing faster, hotter, and with more toxic particulates and gases that give potential victims less time than ever to survive the modern fire environment. Applying water to the fire improves everything: It cools the fuel surfaces, cools and contracts the hot gases, and reduces toxic smoke production, thereby protecting survivable spaces for victims and reducing the deterioration of the structure from the fire. Although we may consider victim rescue our most important objective, getting the first line in place and water applied is our utmost tactical priority and should be the focus of initial operations.

Unfortunately, in many regions, the incident commander (IC) assigns advancing the first line to an individual company; the IC then assigns other duties to other companies. This leaves a two- or three-person team the job of deploying the line to the entry point; charging the line; and advancing it through complex structures with furnishings, changes of direction, and other significant pinch points, all under potentially high heat and limited to no visibility. This virtually guarantees a delay in fire attack, which jeopardizes the operation.

“Engine 1: Deploy a line through the Alpha door for fire attack; fire on the second floor. Engine 2: Stack up on Engine 1.”

Under the First Line Stack-Up concept, the first-arriving crew deploys the attack line per normal standard operating procedures (SOPs). The nozzle firefighter makes the initial advance with the officer or backup firefighter until the advance meets resistance at a pinch point. At this point, the backup firefighter holds his position at the pinch point (e.g., a corner, an obstruction, or a stairwell) and assists in advancing the line past the point. The team maintains contact with the hoseline for crew integrity.

When the nozzle firefighter reaches another pinch point, he “hammers” the line by opening and closing the valve in rapid succession, which can easily be felt back to the entry point. This hammer acts as a nonverbal cue to the others on the line that the nozzle needs further advancement.

This method saves time and energy as opposed to radio communication in a hostile environment. On recognition of the hammer, the backup position grabs a bight of hose and advances with the hose up to the nozzle firefighter, creating a loop of slack for further advancement.

The second-arriving crew, either at the IC’s instruction or as part of an SOP, immediately deploys to assist in advancing the first handline. On arrival, they proceed to the entry point and await the “hammer.” On receiving the signal, the first person on the stack-up crew grabs a bight of hose and advances into the structure following the line until the stack-up crew encounters the next pinch point. This process repeats with each stack-up crew member until all personnel have advanced forward inside the structure. When the nozzle firefighter reaches the fire area and is able to make the final push for applying water to the seat of the fire, that member will hammer the line again, bringing the backup firefighter to the nozzle. At this point, the nozzle can relay to the backup that water is on the fire.

Once water is on the fire, the stack-up crew seamlessly becomes the primary search team. When the nozzle reports to the backup firefighter that water is on the fire, it is the signal to the backup firefighter to begin searching the immediate area and communicate back down the line for the other line personnel to do the same. This fits in with an overall strategy of ensuring that the fire area is the first area searched, followed by those areas closest to the fire area. By allowing the stack-up crew to speed the advancement of the line to the fire area, we have effectively hastened the commencement of search in the areas in which search is needed the most while minimizing the time to water application/extinguishment. As an added benefit, you can consider the stack-up crew essentially as the forward rapid intervention team, since they have direct contact through the line with the hose team and are in the best position to render aid if a catastrophe strikes.

The stack-up concept is critical for limited staffing situations and is optimal for a three-person engine crew with a working boss. However, the concept is also ideal for four-person engines. Stacking a three-person hoseline with as many as three additional personnel can allow the company officer to take more of a supervisory role in managing line placement and stream application. Under this model, the officer can stay with the nozzleman, using the thermal imaging camera to search and monitor fire conditions, and direct the forward progress while the third firefighter and subsequent stack-up crews focus on managing pinch points and line advancement. This frees the officer from managing pinch points so he can manage the larger operation. This also shaves even more time by having a boss with the nozzleman so that when water is on the fire, that boss can immediately fall back and order the search to commence.

With so many critical tasks on the fireground, it may seem counterintuitive to stack precious personnel on the first line. However, stacking up the first line will speed the fire attack and the search processes. By ensuring peak efficiency at getting water on the fire, firefighters can protect, locate, and remove occupants more quickly and more efficiently. Multitasking stack-up crews can seamlessly assist in fire attack, search, rescue, and even rapid intervention. To better coordinate efforts and maximize the use of limited resources, consider a first line stack-up deployment to improve performance.

Howard Rinewalt is a 15-year veteran and chief of the East Montgomery County (TX) Fire Department and has held every rank from volunteer firefighter to paid chief. He was the incident commander for the unified command structure for Hurricane Harvey. Rinewalt is experienced in rural and suburban firefighting strategies and tactics and is certified in Texas as a firefighter-advanced, a fire instructor 2, a fire officer 4, and a hazmat tech.

Jason Hearnsberger is a 19-year veteran and quint company lieutenant with the Woodlands (TX) Fire Department and is assistant chief for the Champions Emergency Services District. He began his career in 1995 with the Klein (TX) Volunteer Fire Department, where he served for 20 years and attained the rank of deputy chief. Hearnsberger has a bachelor’s degree in industrial distribution from Texas A&M University.