Light and air shafts are not just an urban animal. All across America in “Main Street” areas, old, attached multiple-story buildings of ordinary and wood-frame construction sit next to each other in a century-old symbiotic relationship. Even in bedroom communities dominated by 2½-story wood frames, Cape Cods, and ranch homes, the “Main Street” area will often have these buildings. Even if they are not present in your jurisdiction, you might find them on mutual-aid assignments. Therefore, it is critical to understand that in an old attached building, expect a light and air shaft somewhere between each building.

Why do shafts exist? Before air-conditioning, transoms and air shafts were used to direct breezes into the apartment interior. Transoms were rectangular awning-type windows located in the wall above the door to each apartment. They could be pivoted open and closed, depending on how much air flow was desired. They worked in conjunction with open windows on the shafts and in apartments so air could flow into inner rooms, where it would be relatively impossible otherwise. Over the years, fire codes prohibited transoms and ordered them covered up. They were a significant fire and smoke spread factor in the 1958 Chicago Our Lady of the Angels school tragedy and in many other incidents. The shafts, however, are still there, still spread fire, and still threaten exposures.

Shaft location will vary. Some will be open and quite large (photo 1), while others will be totally enclosed by the building (photo 2). 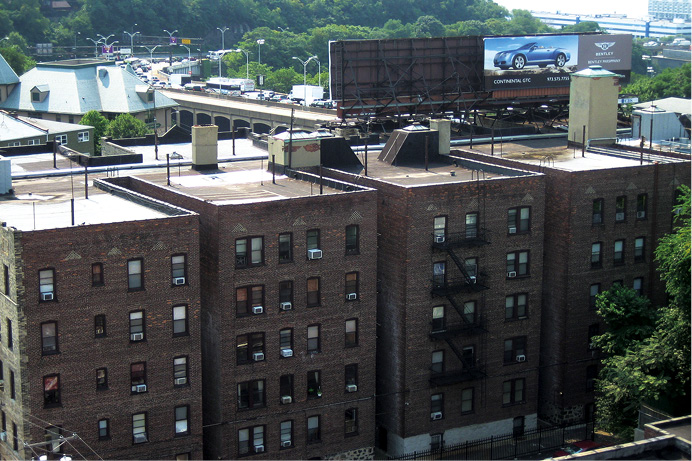 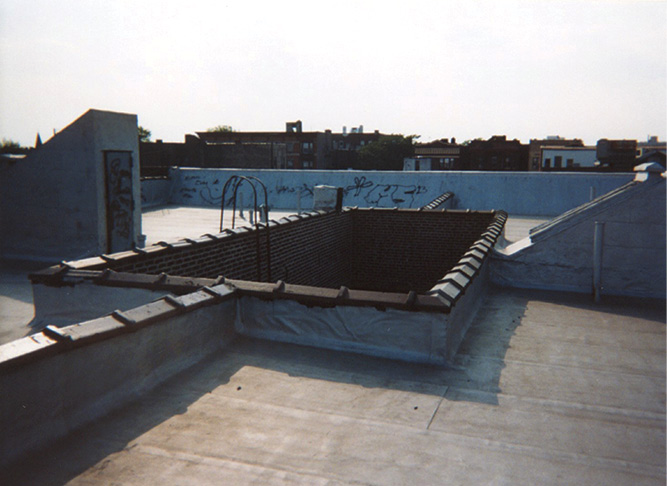 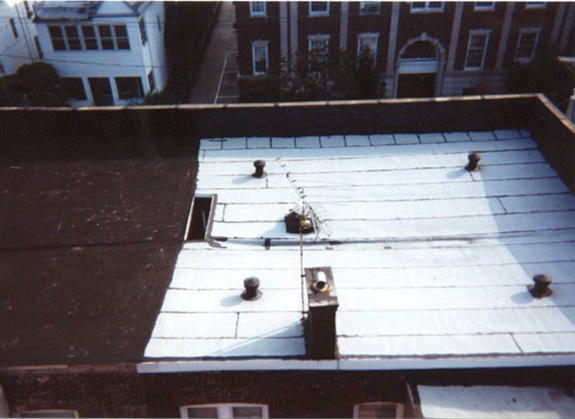 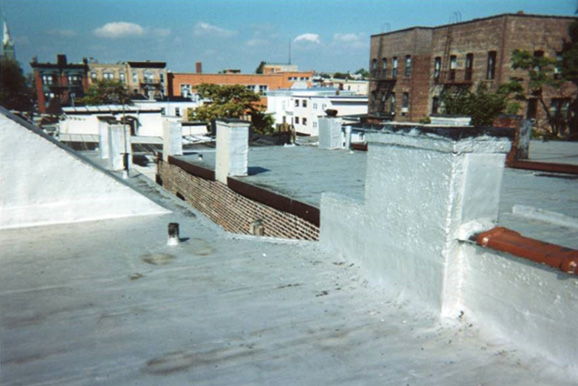 When firefighters are operating on the roof, smoke from a fire that is feeding on roof tar, asphalt siding, and old wood may mask the presence of shafts. Since these attached structures are often identical and constructed in rows, once you are on the roof, look at the other uninvolved buildings. Where are their shafts? Chances are, if the buildings were built at the same time, the shaft orientation will be the same from building to building, so it will guide roof teams where not to step.

In the middle right of photo 4, a parapet runs partway back from the front of the building, and you can cross over the parapet from one building roof to the next. But as you proceed farther back on the roof, past the chimney, there no such barrier. There is only an open, unprotected shaft—a four-story drop. If there is heavy smoke from a fire below, this open shaft might not be visible at all.

In contrast, the parapets in photo 1 have shafts on the other side of the parapet into which you would fall if you attempted to cross to the next building roof. In photo 5, crossing the parapet at the front of the building will get you to the exposure roof, but crossing over farther back toward rear of building will get you a ride to the ground. Always check what is on the other side of a parapet between buildings. Smoke can mask a lot of danger on the roof. 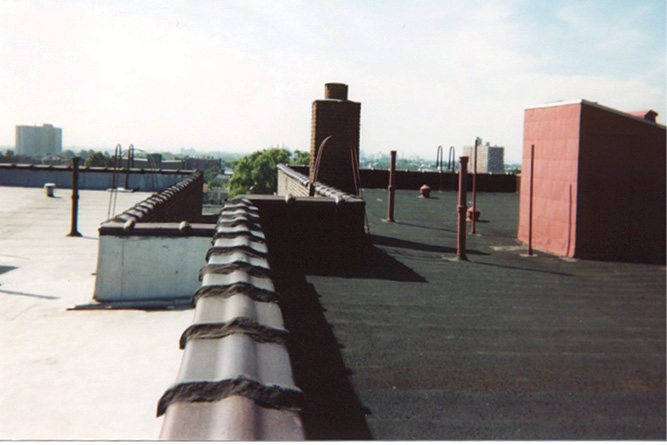 If you are on the roof at an attached building, you must assume that there are shafts somewhere. As a ladder officer or a firefighter, you must be on the lookout for them and report them to command when you observe them. As an incident commander, it is critical that you know of their existence and location.

The other vantage point for spotting shafts is from the interior. You do not always go to the roof, especially when alarms are activated, but you can still determine if shafts are present. First, if you are assigned to check the rear, you may see open shafts. Report them to command. Personnel inside the building should also take notice of them—if they are looking and paying attention. Windows on side walls are the key. If you are inside an attached building and see windows on a side B or D wall inside the apartment, the hallway, or both, it is an indicator that there are shafts present (photo 6)—make a report! 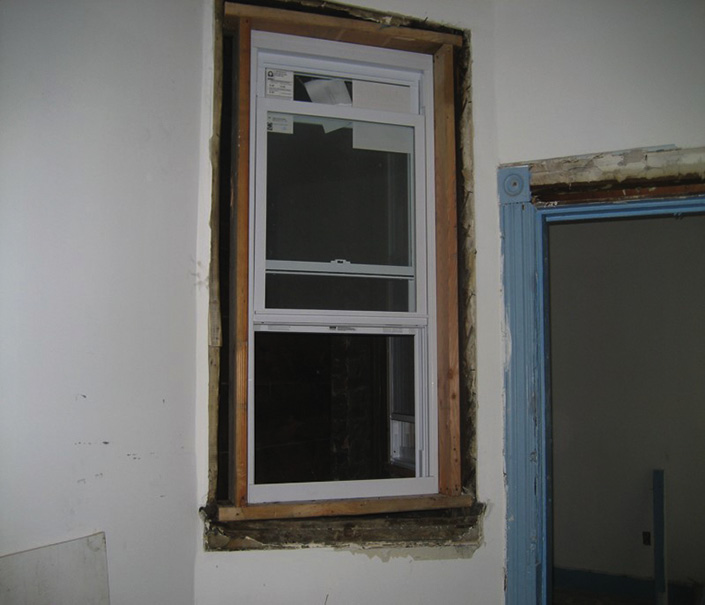 Photo 7 shows the fire where North Hudson (NJ) Regional Fire & Rescue Firefighter Vinny Neglia made the supreme sacrifice searching for victims. A double pane insulating skylight over the top of the shaft allowed a backdraft condition to develop in the shaft. This caused fire to explode into the apartment and out of the cockloft, hinging the ceiling downward and trapping Neglia. In photo 7, the skylight had melted out from the violence of the sudden fire progression. I call this a “Roman candle condition,” a plume of angry fire venting from a shaft between two buildings. Do not confuse this with “fire through the roof.” Photo 8 shows a similar shaft that was covered over during a renovation. The removed acrylic glass covering can be seen in the background near the top of the photo. If this covering does not melt out, the situation could generate a backdraft condition in the shaft similar to the one that occurred at the fire in photo 7. 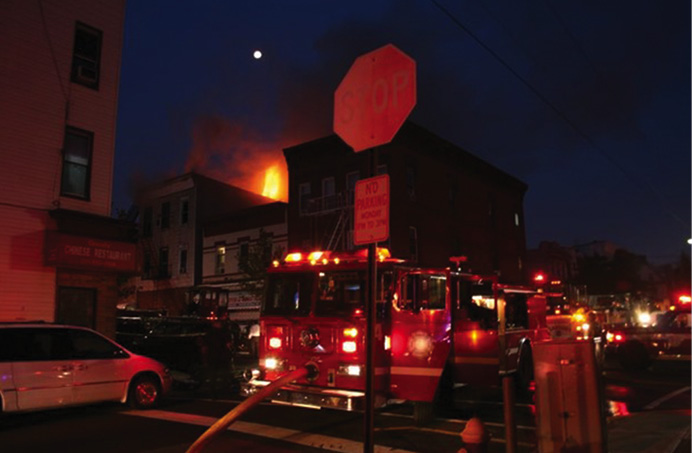 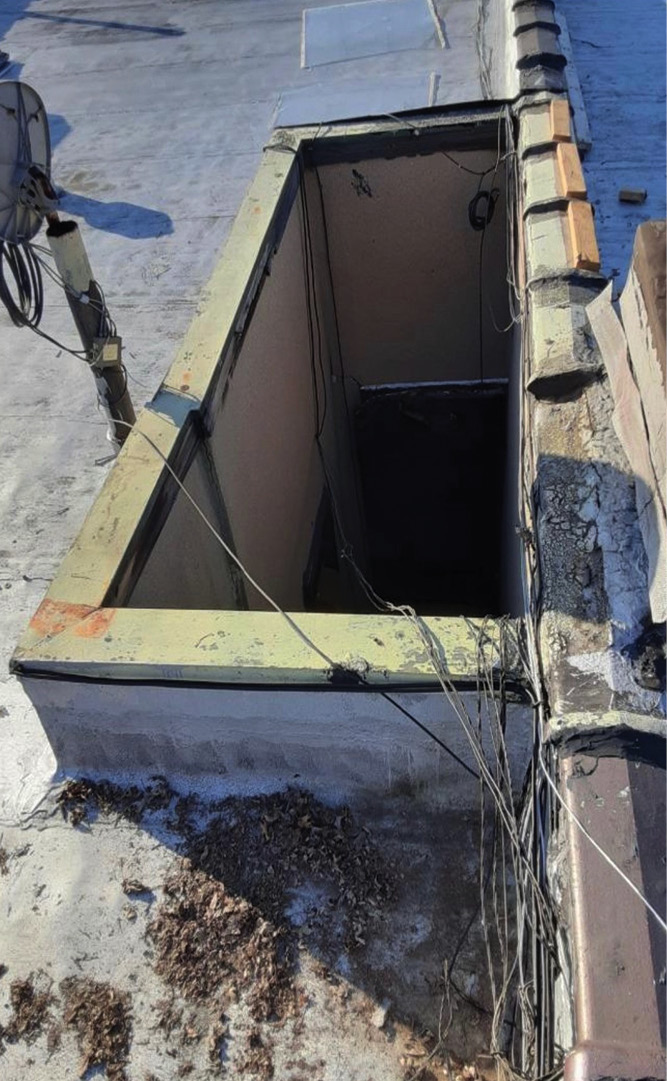 Photo 9 shows a wall with a large burn pattern where a previous fire spread through a small shaft between the buildings and ignited the combustible asphalt siding on the wall. Note the two windows on the shaft. You must stretch lines to this top floor as well as to the lower floors and roofs of both buildings. If you do not have a hoseline or water can, do not negatively influence flow paths by opening apartment doors, which could allow fire to sweep into the open stairwell. Opening the bulkhead or scuttle/skylight on the roof with apartment doors open can also accelerate the spread from the shaft to the interior stairwells. Keep the beast in the cage. 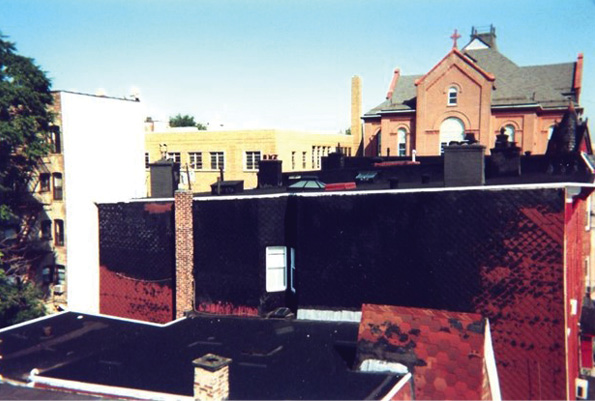 Photo 10 shows an identical half-shaft on two sides of the same building. A similar building attached on either side with a shaft mirroring the half shaft would make it a full shaft, in which a fire would expose two buildings simultaneously. These shafts are also easy to fall into because there are no parapets or guards. 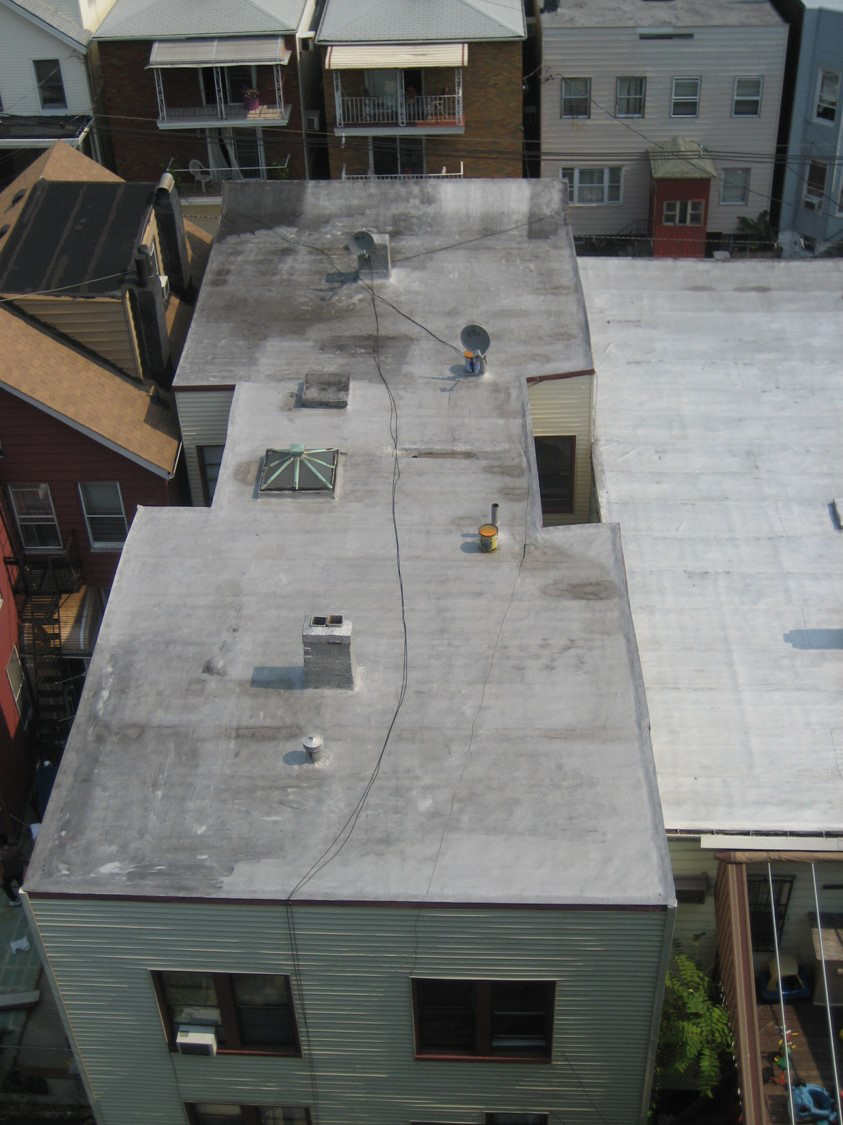 A Google Maps shot (photo 11) shows an aerial view of what I am talking about in photo 10 in the paragraph above. There are half shafts on each end of this row of multiple dwellings. Between each building is a full shaft, which is actually two mirrored half-shafts. This exposes two buildings. Google Maps, for me, was a game-changer. Before that, I would have to go to the roofs of the tallest buildings in the area to get good roof recon photos. Now, Google Maps shows aerial views of the buildings so, as incident commander, I could provide my firefighters with some intel before they engage. 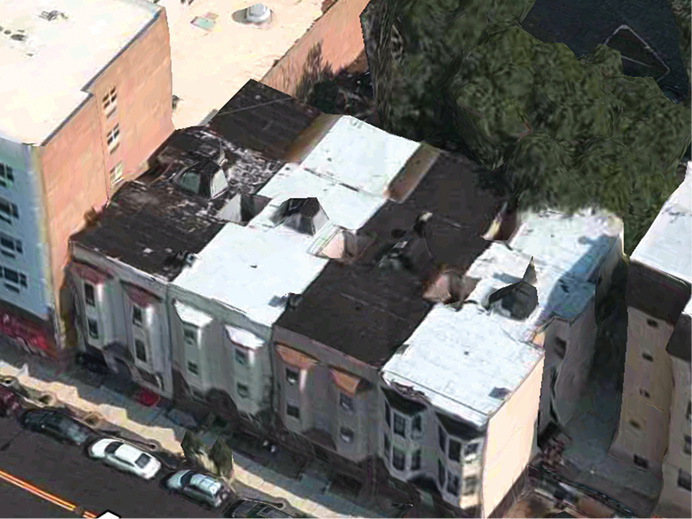 Photo 12 shows an aerial view of two shafts in attached buildings that were covered over during renovations. These can cause backdraft conditions to develop as well as allow fire to spread to both upper floors and the cockloft of each building. They may be easy to miss during night operations. Do not bet on them holding the weight of firefighters! 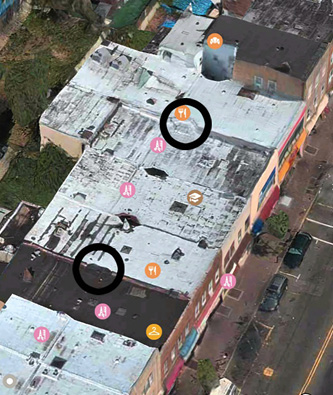 Where there are stores on the ground floor of attached buildings, the shaft often starts at the second floor so the space in the store can be maximized. Imagine finding a victim in here and the attendant rescue problems that it could present if both buildings were involved (photo 13). If this building were attached on the B side, this shaft would only be visible from the roof or from the interior by way of side wall windows.

The half-diamond shafts in photo 14 usually have two adjacent windows on the angled part of the wall. The flat end of the half-diamond may be an unpierced wall of the exposure (photo 15). The smaller the shaft, the bigger the fire spread concerns. If asphalt (“gasoline”) siding is present on the walls, it will be an even bigger fire spread hazard, allowing fire to spread very quickly into adjacent rooms, apartments, and the floors above. An angry fire in in this shaft will create the Roman candle condition. If the adjacent building also has a half-diamond shaft, it makes a full diamond, exposing four windows in two separate buildings. 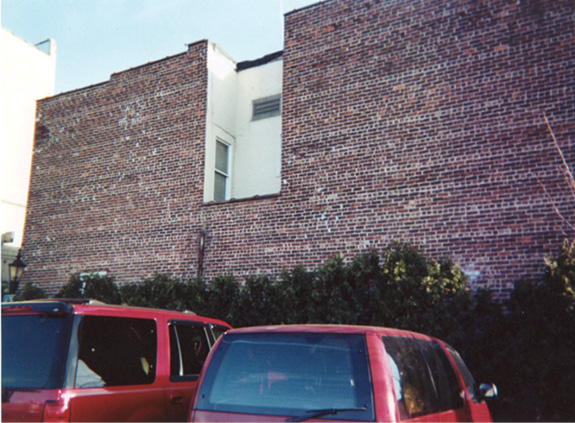 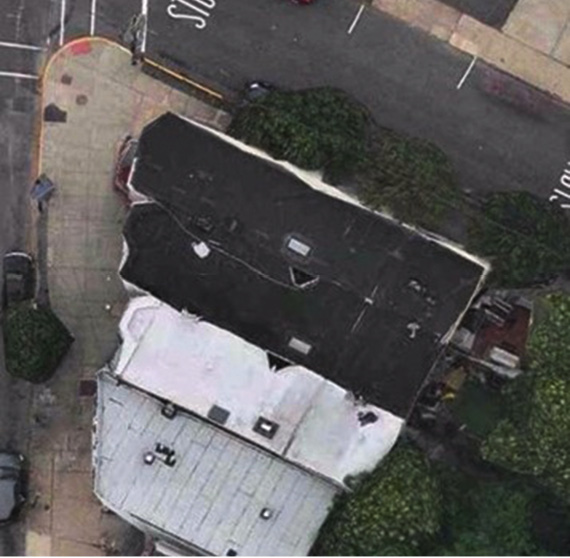 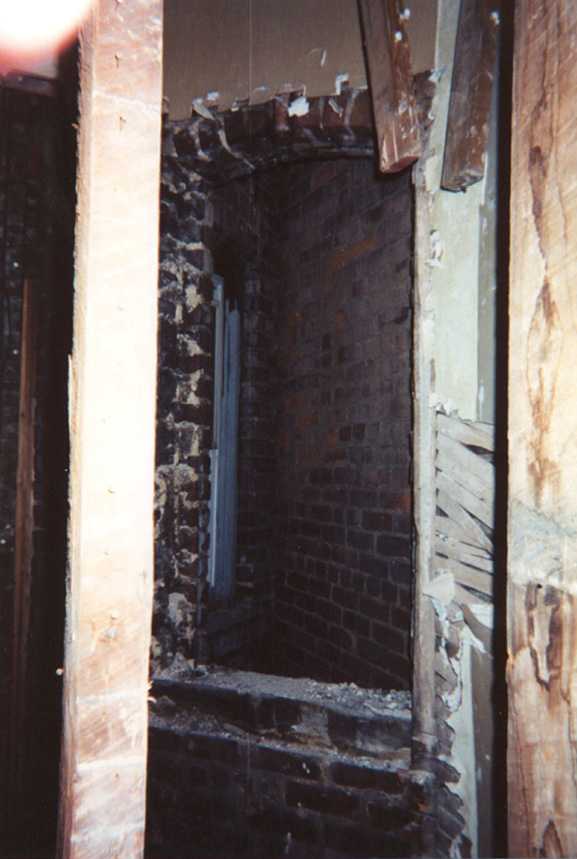 Wherever you have old, attached buildings, get out of the firehouse, get up on the roofs, or use the mapping technology available to scout them out. Ensure that everyone is aware of them. Some jurisdictions such as North Hudson have many; some only have a few, but it only takes one to create a casualty. The night of the fire is way too late to find this out.

ANTHONY AVILLO, M.S., is the director and the deputy fire marshal at the Monmouth County (NJ) Fire Academy and an adjunct professor at New Jersey City University. A 35-year veteran of the fire service, he retired from North Hudson (NJ) Regional Fire & Rescue in 2015.

Two Injured and One Dead in Baltimore Fire