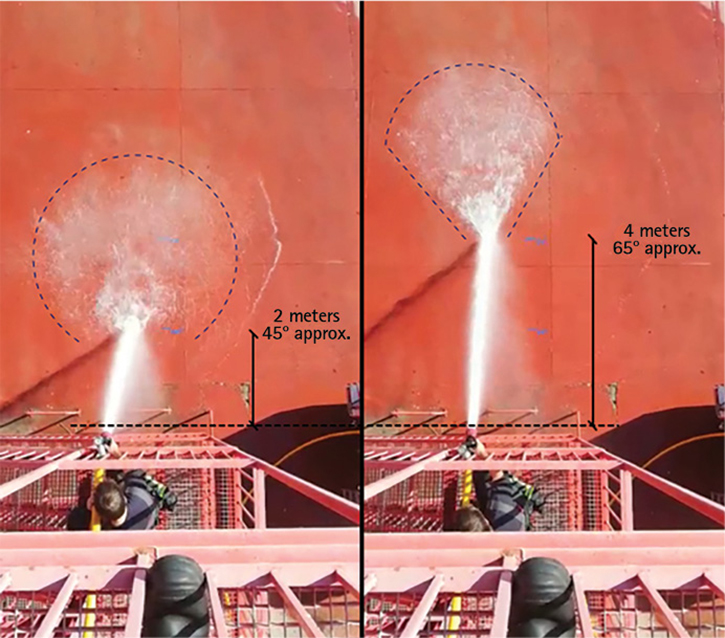 External water application (EWA) is a suppression technique performed from the outside of a structure fire. Its objective is to improve the conditions inside a fire compartment by taking away some of the energy the fire is developing, thus “resetting” it to a previous, less-intense condition.

Water has a cooling effect when projected into the burning enclosure even if it does not reach the seat of the fire. Water, however, is most effective in reducing the heat-release rate of the fire if it reaches the fuels that are burning instead of just cooling noncombustible walls and ceilings. The most significant factors influencing the dispersion of fire streams within a compartment are the position of the nozzle firefighter in relation to a window and the nozzle pressure.1 Considering these factors, a fire stream with adequate flow and relatively low velocity applied at a steep angle will be more effective than a high-velocity stream directed at a lower angle for comparments with a volume not exceeding 1,760 cubic feet. 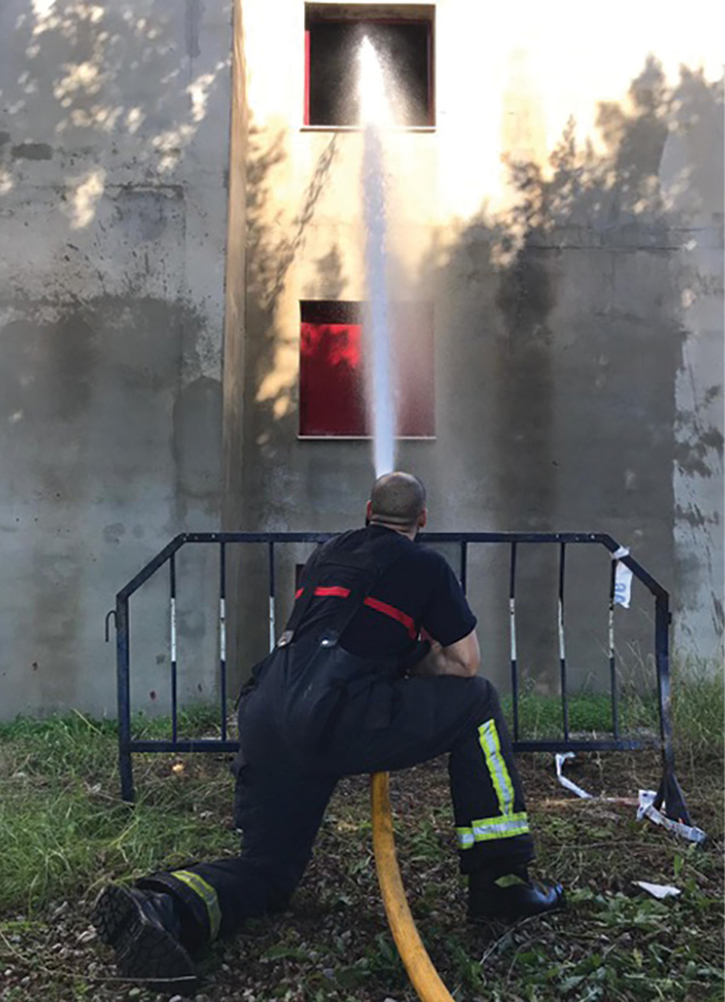 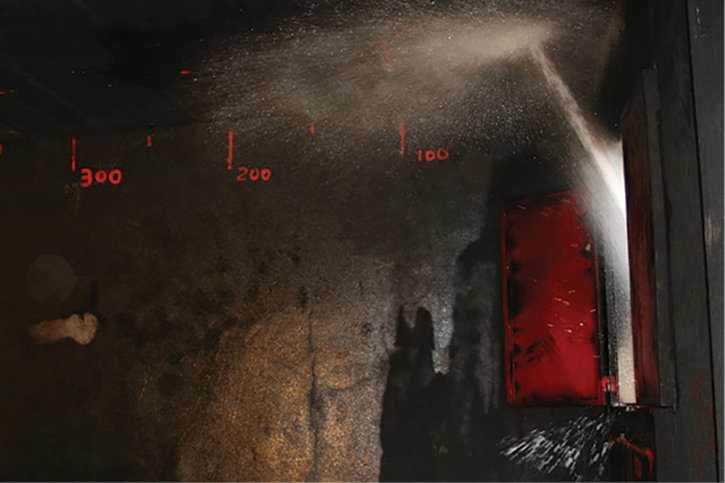 (1-2) We need criteria that allow the operator to apply the water in the most efficient way. (Photos by author.)

Driver-Engineers Debate: This One Or That One?

Attacking from the Burned Side Can Save Lives

The fundamentals of EWA have been examined in various articles2 and emphasize two objectives: to avoid the perception/effect of “pushing” fire3 and improving conditions inside the structure. The three basic elements found in an active fire that may be influenced by the external projection of water, with different results, are discussed below.2

When performing an offensive exterior attack, the nozzle firefighter is limited because he has only a general idea of the layout based on the occupancy of the fire building—for example, an average size bedroom in a private dwelling; he does not know the dimensions and layout of the fire compartment and how the contents are arranged. Exterior attack will also limit the assessment of interior conditions only to what can be seen from exterior openings and the behavior of the products of combustion as they vent from the structure. 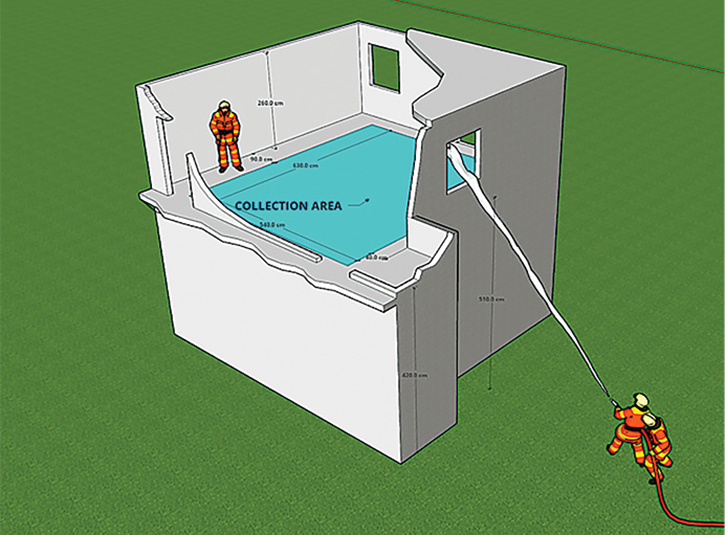 (3) A dimensioned 3-D model of an experimental compartment.

It is very important for firefighters to understand that the intent of an exterior attack is to take some of the energy out of the fire (“resetting”) to buy time for trapped occupants and must be rapidly followed with an attack from the interior. Every year, firefighters advancing the initial attack hoseline inside the fire building encounter unconscious occupants along the major pathways of egress: doorways, stairways, and hallways.

Since water in an EWA may not reach the seat of the fire, it is important to research fire stream application methods that would be most effective in reducing the effects of fire on exposed interior surfaces and producing the best chance of getting water on at least some of the fuels. To accomplish this, we must understand how water is distributed during fire stream applications. Nozzle teams must understand the variables influencing an exterior attack so they can use application techniques that most effectively disperse water for the conditions they encounter.

This article examines two factors that are critical for an effective offensive exterior attack: the position of the nozzle and nozzle pressure. 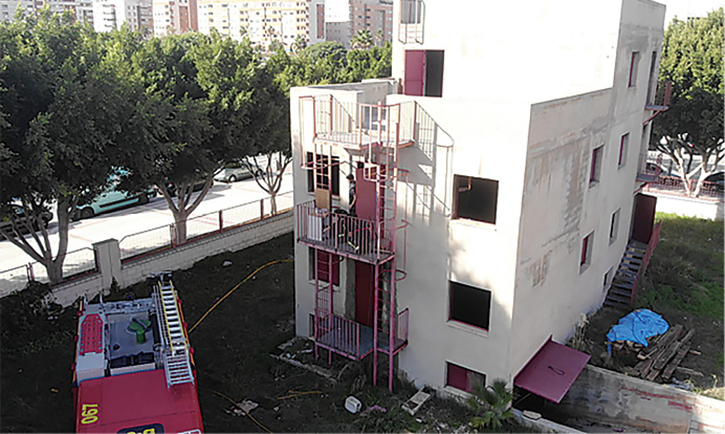 (4) The training facilities of the Málaga (Spain) Fire Department where the experiments were carried out.

The effects of water projection have been detailed by the Underwriters Laboratories Firefighter Safety Research Institute (UL FSRI) in its Water Mapping research. UL FSRI compared various types of nozzles and projection locations—through the door, at the same level as the fire, or through a window at a higher level; movements during the projection of streams—Z, O, T patterns or fixed; and pressure in an enclosure of approximately 200 square feet.

One of the findings of the UL FSRI Water Mapping research is that when water is projected against a ceiling, it does not “bounce,” but it travels a considerable distance across the underside surface of the ceiling before falling to the floor because of gravity. The direction and distance traveled by the water under the ceiling depend on the angle at which the stream is directed and its velocity, which gives it momentum after striking a surface. When a fire compartment is relatively small, such as a bedroom, a nozzle stream of sufficient velocity applied at a steep angle (nearly vertical) to the ceiling disburses horizontally in all directions under the ceiling until it strikes the walls.

We can deduce from this research that a low angle of application is likely to concentrate the stream on the wall opposite the window from where the stream is directed and, consequently, most of the water will end up on the floor as runoff. The alternative would be to apply the stream at a steep angle to allow the stream to impact the ceiling and disperse in a more radial pattern. This method was found to cool a greater surface area, and although it will limit the stream’s ability to reach deep into a large fire compartment, it is more likely that the water will fall on burning contents.

Among the multiple tests detailed in the Water Mapping study, those that most closely resemble the deployment techniques proposed for EWA are those in which a 1¾-inch hoseline and a combination nozzle flowing 150 gallons per minute (gpm) at 100 pounds per square inch (psi) were deployed. The tests found that water was collected in large quantities in containers below the wall opposite the projection window.

From the perspective of implementing the EWA technique, variations addressed by the UL FSRI study are based on a change of the projection angle from a fixed position, but the study does not address repositioning the operator or variations in the projection pressure.

Another aspect limited by the design of the UL studies is water behavior when the distance between the window and the opposite wall exceeds 11.4 feet, the depth of the compartment where the tests were conducted.

To obtain an overview of these aspects, we designed a series of tests in which we applied water streams with combination nozzles on 1¾-inch hoselines to a compartment on a first floor measuring 23 feet wide by 22 feet deep and a ceiling height of 8 feet, 6 inches. Inside, we arranged a grid of 81 water-collection containers starting at approximately two feet from the projection window. We conducted 18 trials by modifying the operator’s position and nozzle pressure:

Three trials were conducted for each configuration. We obtained an average of the value of water discharge density (gpm/sq. ft.) for each cell in a number of containers covering the compartment geometrically from the perimeter to the interior. For the rest of the cells, we calculated the discharge density value on the basis of measurements in the adjacent cells. As comparison values, National Fire Protection Association (NFPA) 13D, Standard for the Installation of Sprinkler Systems in One- and Two-Family Dwellings and Manufactured Homes, and NFPA 13R, Standard for the Installation of Sprinkler Systems in Low-Rise Residential Occupancies, establish a minimum discharge density of 0.05 gpm/sq. ft. for sprinkler systems in residential use. The EN 12845 Standard establishes a discharge density of .055 gpm/sq. ft. for low risks (such as housing) and 0.12 gpm/sq. ft. for ordinary risks (shopping centers, hospitals, offices, and small stores). It is verified by direct observation that most of the projected water does not fall within the collection area but goes beyond it.

The results obtained, shown in Tables 1 and 2, can be summarized in the following statements: 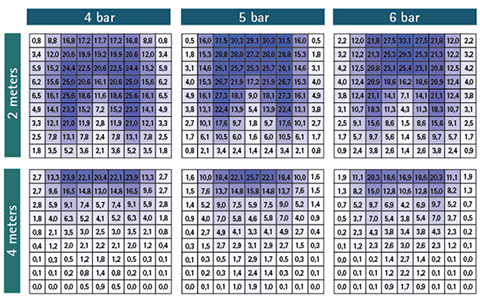 When applying the EWA, the nozzle firefighter’s position and nozzle pressure have a significant influence on the dispersion pattern inside the room. The results of the EWA tests are consistent with those of the UL FSRI studies and prove the effectiveness of exterior offensive attack.

The results of the UL FSRI study and the complementary tests we have carried out both validate the effectiveness and procedures detailed in the article “Offensive fire attack. Variables that interfere with the fire gases outlet.”2 To achieve a higher degree of efficiency by using this technique, follow these guidelines:

(5) Changes in the dispersion pattern can easily be checked by inverting the experiment—for example, projecting from a similar height on a training tower to the ground.

Author’s Note: Thank you to all the colleagues who have collaborated on this work

1. Even if the wall is combustible, it might not be the best option for applying a projection concentrating water massively in a limited area.

2. In reference to the opening through which water is projected regardless of whether it is a window or another type of opening, as in “Offensive fire attack: Variables that interfere with the fire gas outlet,” Pablo Boj, International Firefighter, issues 50 and 51, 2016.

PABLO J. BOJ GARCÍA has been a firefighter in the Málaga (Spain) Fire Department since 2002 and team leader since 2008. He has a university degree in criminology and a master’s degree in occupational risk prevention. His work has been focused on fire investigation and, in recent years, on fireground tactics, in which he trains and lectures. He has written numerous articles and is the co-author of Fundamentos Teóricos para Bomberos.