A rope rescue off the roof of a burning building is one of the most daring rescues a firefighter can make. Doing it when the rope might be exposed to fire and could melt or break is a phenomenal rescue. When studying for promotion in the Fire Department of New York (FDNY), we had a code to remember the rescue priorities: “I Have (a) Fat Little Rump,” which equated to interior exits were the primary and safest. That was followed by horizontal exits moving people away from the fire area. The third option was fire escapes, which had railings and were a little safer for civilians. If none of those options was available, then we used ladders, which would take a lot of firefighters to accomplish. The last resort was always a rope, because the firefighter and the rescued civilian are going to be hanging off the building! The person lowering them most times does not have a view of the firefighter being lowered, so another member is required to relay commands. These factors make it a low-frequency/high-risk rescue for both the member and the civilian involved.

On October 27, 2016, at 0326 hours, a fire was reported on the Upper East Side of Manhattan. The fire building was a five-story building of ordinary construction with two apartments per floor that ran front to rear. It had four windows in the front of the building. There was a front fire escape but no rear fire escape, which meant civilians trapped in the rear had no escape except for firefighters. There was heavy fire in the enclosed light and air shaft between the fire building and the exposure 4 side. Fire was also burning in the cellar and in every apartment from floors 1-5 on the exposure 4 side of the fire building. Inside the building, fire had extended out of an open door on the first floor and had control of the lobby and the wooden stairs on every floor all the way up and out of the bulkhead on the roof. There was an inordinate amount of fire in this 100-year-old building.

The fire had control of the lobby, the wooden staircase, and the apartment on the exposure 4 side. An engine company knocked down the fire in the lobby and on the staircase leading to the second floor and was proceeding to extinguish the fire in the first-floor lobby. The interior wooden stairs were damaged by fire, and another engine company and its members would have to advance the hoseline up them to extinguish the fire on the second floor. This would have to happen on every floor of the building, which would take considerable resources and coordination. This fire would be personnel-intensive.

Firefighter James Lee was assigned the roof position in Rescue 1 for the night tour. He made his way up to the roof using exposure 2’s interior stairway. Once on the roof, he observed that fire was blowing out of the enclosed light and air shaft at least 30 feet in the air and that the roof and bulkhead of exposure 4 were on fire. The rear of the building had a four-foot iron fence that was eight inches from the back edge of the roof. Noticing that there was no rear fire escape, Lee leaned over the fence and shined his light on every window on the top three floors; there were no victims visible at this time. Lee began to assist the members who were already operating on the roof.

Conditions on the roof, as well as at the rear of the building, were rapidly deteriorating when Lee heard someone give a report of a victim at a top-floor rear window. Firefighter Frank Rush, Rescue 1’s chauffeur, who was conducting searches in the first-floor fire apartment, also heard that transmission and made his way to the rear yard through a back door from the apartment. Once in the rear, Rush spotted the victim and called Lee on the portable radio to tell him that the victim was on the top floor, two windows off of the exposure 4 side. Rush then established contact with the victim, 81-year-old Jim Duffy, and told him to stay in the window.

Because of the heavy smoke and heat pushing straight up and over the rear of the building, Lee quickly moved toward the exposure 2 side of the building to get an angled view, which allowed him to get a visual look at as well as establish contact with the victim. The window of the apartment that the victim was in had now failed, and heavy smoke and heat were venting out over the victim’s head. Lee told the victim that help was on its way and to stay in the window. Lee contacted the incident commander to let him know that there was a victim hanging out of the top floor in the rear and that he was setting up the lifesaving rope (LSR). Meanwhile, inside the fire building, because of the heavy amount of fire, the interior hoseline had still not made it past the second floor, and all attempts to reach the victim through the interior of the fire building were blocked by heavy fire.

Heavy smoke and heat were now pushing even harder up and over the rear of the building. Lee moved to a position on the roof that was in line with and over the victim. He could hear the victim but could not see him. Lee dumped the LSR out of its bag and onto the roof and handed the hook off to Ladder 43 Chauffeur Firefighter Andy Hawkins. He tied off the LSR to a short 3 × 3 chimney that was approximately 10 feet back from the edge of the roof and centered in the building. To avoid running the rope over the top of the iron fence, which could have damaged the rope or compromised the anchor/system, he passed the LSR hook under the four-foot wrought iron fence, fed it back over the fence, and then attached it to his personal harness.

Once Hawkins was anchored to the chimney and had taken his four wraps around his rappel hook, Lee climbed over the four-foot iron fence and stood on the narrow eight inches of roof between the fence and the rear edge of the building. Lee could hear Duffy yelling for help and saying that he was “burning.” While reassuring Duffy and being guided by his voice, Lee positioned the antichafing device on the edge of the building. Without hesitation and at extreme personal risk, Lee dismounted into the high heat and black smoke that was now pushing violently from the top-floor windows. Once over the edge and on rope, Lee was blasted with high heat; visibility was zero. While being exposed to this extreme heat, he remained focused and continued to communicate and calm Duffy. In the rear yard, Rush directed Lee over to the window with the victim. Once Lee became level with the window, Rush radioed Hawkins to stop lowering.

Duffy was crouched down below the windowsill with fire now lapping out over his head, which kept him from standing up and coming to the window. Lee reached into the window and could get one arm around Duffy’s back and one arm under his knees. Duffy was unable to hold onto Lee because of the cuts and burns on his hands and arms, so it was all up to Lee. With all of his strength, Lee grabbed Duffy and pulled him out of the window. When he did this, the force from the removal caused the rope to rotate 180° so that Lee’s back was now to the building. Rush gave the order to lower. Lee, while being lowered with his back to the building and the victim in his arms, was unable to use his hands to rotate himself back to face the building. To avoid being hung up on parts of the building while being lowered, he had to continually kick off from the building with his legs while cradling the weight of a grown man in his arms.

Members on the roof observed that the LSR was beginning to burn as they approached the third floor. By the time Lee and Duffy reached the ground, the window from which Duffy was rescued was fully involved in fire. Shortly after, the LSR burned through completely and fell to the ground. Lee and Rush then carried Duffy through exposure 4 to the front of the fire building, where Duffy was handed off to emergency medical services.

A rescue of this magnitude completed under arduous conditions is a testament to the training and knowledge of all those involved. The victim was seconds away from jumping out of the fifth-story window, which most likely would have led to his death. This rescue shows the importance of communication; teamwork; and, most importantly, training. If a low-frequency/high-risk maneuver becomes necessary, you had better have trained on it and be comfortable using it. There is a man alive today because of the determination and dedication to duty of all members involved in this operation.

ROBERT MORRIS JR. is a 22-year veteran of the Fire Department of New York and the captain of Rescue Company 1.

MICHAEL M. DUGAN, a 42-year veteran of the fire service, is also a 27-year member of the Fire Department of New York (FDNY), from which he retired as the captain of Ladder Company 123 in Crown Heights, Brooklyn. As a lieutenant, he served in Ladder Company 42 in the South Bronx. While assigned as a firefighter in Ladder Company 43, in Spanish Harlem, he received the James Gordon Bennett Medal in 1992 and the Harry M. Archer Medal in 1993, FDNY’s highest award for bravery. He was a volunteer firefighter in Halesite, New York. He lectures on truck company operations, building construction, size-up, and today’s fire service. He is a member of the FDIC International and Fire Engineering advisory boards. 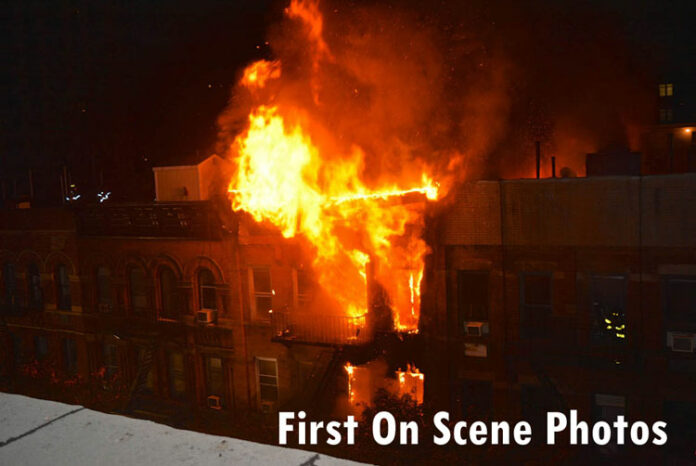 SEE MORE PHOTOS FROM THE SCENE >>

Pics and report by First On Scene Photos

One man was killed and many others, including several firefighters, were injured in a raging six alarm fire on East 93rd Street on the Upper East Side of Manhattan, New York, early Thursday morning October 27.

The fire may have started on a lower floor of the six story building but quickly spread to the upper floors, eventually burning through the roof.

Flames could be seen for miles around the city.

Firefighters from FDNY Rescue Company 1 and two first to arrive truck companies made a daring rescue of a man trapped on the fourth floor by lowering a firefighter on a rope who grabbed the man from a window and they were both lowered to safety.