By PHIL HIGGINS and MARK GREGORY

A new toy—the fidget spinner (photo 1)—has created a craze now popular among people of all ages. It was designed to relieve nervous energy and calm people down. It has been used with much success among those being treated for attention deficit and attention-deficit/hyperactivity disorder and autism. The device has become so popular that it has been banned by some schools for distracting students from their studies while in class.

Since its popularity increased in April 2017, the fidget spinner has been the cause of multiple 911-related responses for persons with their finger stuck in the toy. As first responders, we must have a plan to deal with removing a victim from these types of devices. This article discusses the necessary steps to safely disentangle a victim. 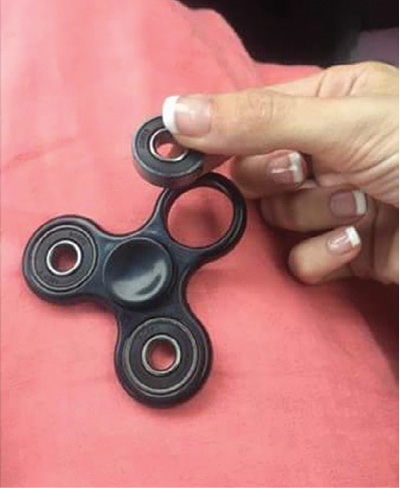 The fidget spinner is composed of a two- or three-pronged clover design made of plastic or metal. Within the center of the device is a ball bearing that allows the toy to spin on a person’s finger. The bearings come in a variety of material such as ceramic, stainless steel, and even chrome. Because of their high-strength characteristics, a typical fire department or emergency medical services (EMS) ring cutter might not be the most suitable tool to use on these rings (photo 2). 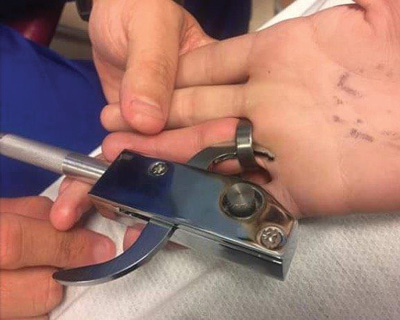 The weights or additional bearings on the outside of the device allow it to spin fast and balanced. The problem arises when the finger is lodged in the bearing portion of the fidget spinner and the person is unable to remove it. This creates a new challenge for rescuers. However, if you follow ring removal techniques that have been a part of your rescue plan (along with some variations discussed here), you can remove it successfully.

Several months ago, a young man required an emergency room visit after a fidget spinner became stuck on his finger. The 15-year-old had been playing with the toy when he became increasingly curious about how it was made, so he decided to take it apart. Once apart, he placed this “ring” on his finger with ease, sliding it on and off his finger for several hours. However, after a few hours, it became stuck on his finger; the finger then started to swell to the point that he could no longer take off the fidget spinner (photo 3). 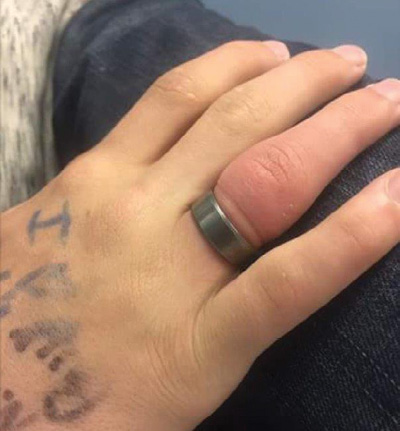 At the hospital, the emergency room staff attempted a “ring” removal using multiple tools including ring cutters, bolt cutters, and grinding tools, but nothing seemed to work. During the removal attempts, medical staff also provided intravenous medications to sedate the patient and assist with pain management. After hours of work with little success, the victim was eventually transferred to a children’s hospital where, in its operating room, doctors attempted to remove the ring with everything they had. The use of a torch was even discussed as a final option but was later dismissed because the doctors feared additional damage to the victim’s finger and hand. 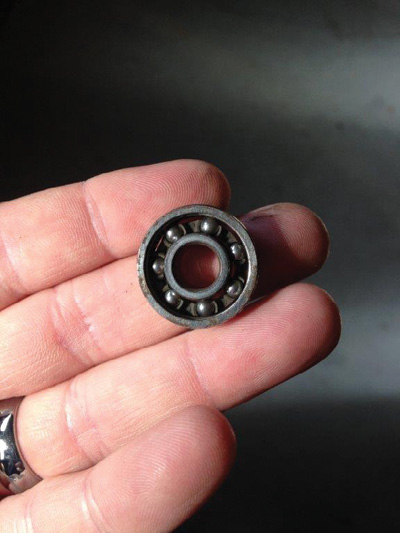 In another incident, a teenager entered a fire station needing assistance to remove a “ring” stuck on his swollen finger. When personnel questioned the young man, he stated that he was a skateboarder and that the ring was a titanium bearing from the interior of a skateboard wheel. The bearing consisted of an inner and outer race, a retainer, several round balls (ball bearings), and a shield (photo 4). The teenager decided to take the bearing apart and place one of the races around his finger to wear as a ring. After an unknown amount of time, his finger became infected; it then swelled to the point where he could no longer take off the ring.

The public as well as the medical community (i.e., doctor’s office, urgent care facilities, and hospitals) call on the fire service to handle these types of incidents. You must devise a step-by-step plan beforehand that will help handle these incidents. Tool familiarity is critical for a successful operation. Some of our “go-to” tools will not work on some of these metals. 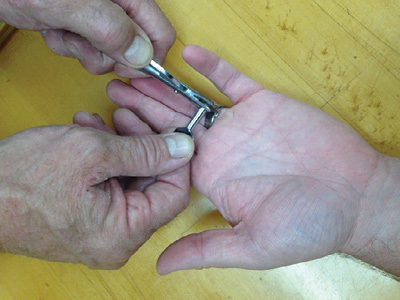 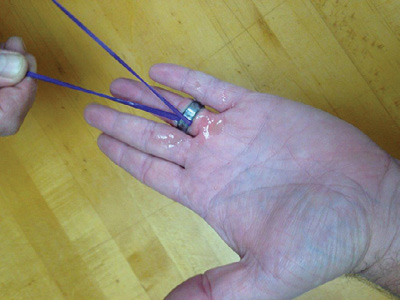 Always attempt to keep the individual calm; explaining the process and telling the victims how certain tools sound can calm them down considerably. At the same time, formulate your action plan as to how you are going to remove the ring. This should become second nature with previous training on this type of incident. Converse casually with the wearer and discuss the type of ring you are now dealing with. Is this ring made of a soft or hard metal, and is it corroding? How long has the ring been on the finger, and how long has the finger been swollen and painful? What is the value or significance of the ring? Perhaps, it may just be the ball bearings from a fidget spinner. Submerse the victim’s hand in a bowl of ice water to reduce the swelling of the finger and numb the affected area. Next, attempt the removal by the doing the following: 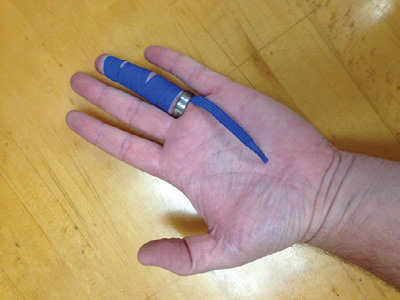 Step 1. Use a natural lubricant; this can be something as simple as dish soap. A fire department’s machinery bag/kit should include a small bottle of lubricant that you can apply and rub around the finger and the ring to lather the finger and get lubrication between the ring and finger (photo 5). With the finger numb and the swelling somewhat reduced, you should now be able to swivel the ring back and forth with a slight tension, moving it over the swollen area and off the finger. 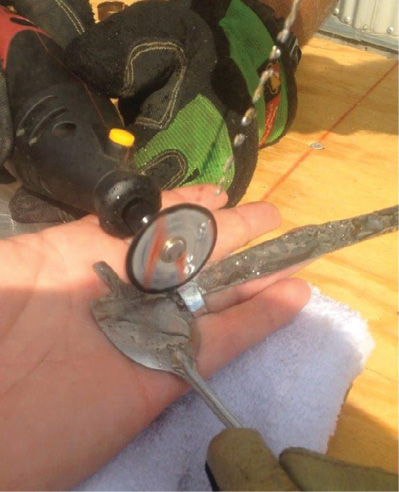 Step 2. Use a large and cut rubber band. With some lubrication already in place, attempt to slide or snake a large rubber band between the ring and the finger so that personnel can apply additional lubrication to move the rubber band. Also do this on the palm side of the hand because of its tougher, thicker skin. Next, slide the rubber band back and forth at a 45º angle (photo 6), which should allow for additional lubricant to get between the ring and finger and may reduce or move some of the swelling of the finger. With a slight tension toward the tip of the finger, the ring will hopefully pass the swelling and then release. An additional benefit of this technique is that the ring will stay on the rubber band when the removal is complete. 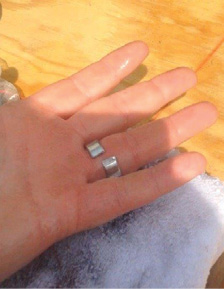 When the elastic gets closer to the ring, attempt to slide or snake the elastic between the ring and finger (photo 7). With the elastic now on both sides of the ring, unwind or reverse this “corkscrew” on the finger with some tension toward the fingertip, allowing the ring to be pulled off.

Step 4. Use a rotary tool. For most rings, a rotary tool makes for an easy removal. However, its metal cut-off wheel can be quite dangerous because of its high revolutions per minute (rpm), which, depending on the model type in your department’s cache, can range from 5,000 to 35,000; this will create a tremendous amount of heat and perhaps sparks. This operation relies on cooling the finger with water. Do not apply too much water because the patient will feel the rapid heat transfer or conduction. Because of this high-speed cutting and exposure to the skin, place shims between the ring and finger to prevent injury. These shims can be anything from a modified kitchen utensil to a cleaned oil dipstick from an old automobile.

After the shims are in place, begin cutting, then cool the area with water. The tool’s operator must remain calm and not rush through the cut; a nice, slow, steady cut will make for an easy removal (photo 8). When one side of the ring is cut, turn over the bearer’s hand and make a second cut because of the strength and lack of flex in these rings. It’s important to keep the original shims in place and apply slight pressure to the ring to prevent it from moving. The ring, now cut, may have sharp edges that can harm the patient; remember our mission, which is “do no additional harm.” When these cuts are complete, the patient should feel immediate relief; two sections of the ring have been removed (photo 9).

Fidget spinner removals are similar to ring removals with a few added curveballs. Obtaining ball bearings or fidget spinners should be relatively easy. Crews should consider performing 10-minute ring removal drills in the firehouse to allow personnel to become more proficient in this new challenge. As we say around the kitchen table, “It’s not a matter of if it will happen in our district but when it will happen.” When it does, will you be proficient and prepared to handle it?

PHIL HIGGINS is a 23-year fire service veteran and a lieutenant with the Fairfield (CT) Fire Department, where he is responsible for rescue operations. He is also an original member of and a rescue squad officer with Connecticut’s US&R team. Higgins is an instructor with the Fairfield (CT) Regional Fire School as well as P.L. Vulcan Fire Training Concepts.

MARK GREGORY is a 30-plus-year fire service veteran and a captain with the Fire Department of New York (FDNY), assigned to Division 15 in Brooklyn. He was previously a captain in Ladder 142 and Division 13, a lieutenant in Tower Ladder 111, and a firefighter in Brooklyn’s Rescue 2 and Ladder 132. Gregory instructs for the FDNY Academy in the Annual Education Day and Flashover Training programs. He also instructs at the Suffolk County Fire Academy and is the lead instructor for FDIC’s H.O.T. program “Man vs. Machinery,” which is taught by P.L. Vulcan Fire Training Concepts.

Mark Gregory will present “Man vs Machinery: Are You Prepared?” at FDIC International in Indianapolis, Indiana, on Wednesday, April 25, 10:30 a.m.-12:15 p.m.