My department protects the city of Yakima, Washington, which is more than 127 years old.

What does this mean? It means we have a lot of old structures including residential homes, some of them built at the turn of the 20th century. We have all fought fires in these structures and can tell stories about one or more particular residences. Recently, our C-shift did a good job saving a 5,000-square-foot house that was built in 1907 and presented all sorts of challenges and hazards. 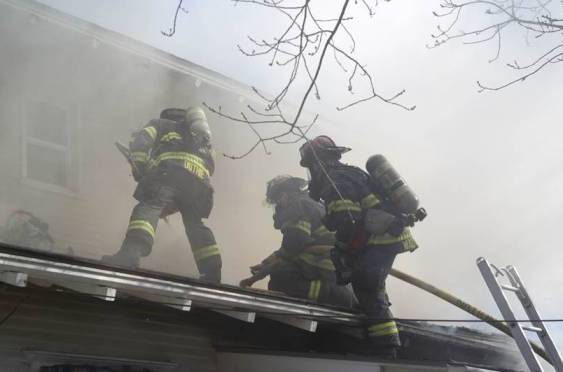 (1) Truck 91 crew checking for fire which had extended to the attic space of an add-on. (Photo by author.)

Old houses can be extremely challenging. Following are some of the things of which you need to be aware:

All of these things pose a potential hazard to you in one way or another.

Fact: Balloon construction was developed for rapid construction. The construction is referred to as “light as a balloon” or “Resembles one giant balloon.”

Action/Precautions: Immediately open walls to check for fire extension. Crews MUST check the basement and attic to confirm no fire/embers have extended or fallen into either one of these compartments.

Fact: In the past, houses were rarely insulated. When they were, cork and sawdust were used in walls and attics. Sawdust was sometimes mixed with lime to keep bugs out if the roof leaked and wood shavings got wet.

Action/Precautions: Aggressively check for extension. Remove insulation and/or wet it down.

Fact: Utilities are usually found in the basement such as hot water heaters, furnaces, and electrical panels. This is the most dangerous area to fight fire in.

Actions/Precautions: Assume that every old structure has a basement/crawl space. Confirm there is no basement by looking for windows and doors (ask this of the homeowner/resident). Confirm that all crews on fireground know there is a basement, and check it for extension.

Fact:  Lead. Airborne lead enters the body by breathing or swallowing lead particles or dust once it has settled. Old lead-based paint is the most significant source of lead exposure in the U.S. Most homes built before 1960 contain heavily leaded paint. Some homes built as recently as 1978 may also contain lead paint

Asbestos. The use of asbestos became increasingly popular among manufacturers and builders in the late 19th century because of its sound absorption; average tensile strength; resistance to fire, heat, electrical, and chemical damage; and affordability. It was used in such applications as electrical insulation for hotplate wiring and building insulation. When asbestos is used for its resistance to fire or heat, the fibers are often mixed with cement (resulting in asbestos cement) or woven into fabric or mats. Asbestos can be found in many pre-1970 homes.

Hazards: Lead. Lead paint can cause damage to nervous systems and kidneys.

Asbestos can lead to lung cancer, mesothelioma, and asbestosis.

Fact: Most homes, at some point, will undergo some sort of remodel, whether it is an additional roof to create a void space where fire can hide or a remodel of a large home into several separate living units with only one or two ways out.

Hazards: Fire can hide in created void spaces. Firefighters can get lost or disoriented in compartmentalized residence. Remodeled residence might not be able to withstand normal fire exposure because of illegal construction.

Actions/Precautions: At times, it can be difficult to determine if there has been a remodeling done, but the best way is to open ceilings and walls and understand building construction. Look at things like mailboxes and multiple power meters to determine if there is more than one family living in the residence.

Hazards: Mortar that holds the bricks of chimneys deteriorate over time because of weather and use. Chimney supports can be damaged from fire or from overhaul operations.

Actions/Precautions: Watch for chimneys, and warn crews of the possible danger. Mark off chimneys with caution tape include the collapse zone.

Old houses were built to last and can withstand fires a little bit longer than most conventional construction, but there are plenty of hazards of which you need to be aware. Remember, the best way to put out these fires is be smart yet aggressive. Once you have the fire out, make sure you do an aggressive overhaul checking for ALL possible means of extension. It’s hard to do a conventional prefire walkthrough of these buildings because they are owned, usually, by a private party. So, when you encounter a fire in one, take the opportunity to learn and teach your new guys what really lies behind those walls.

Alex Langbell is a lieutenant with the Yakima (WA) Fire Department.

Apparatus Purchasing: a Series of Choices, Compromises, and Trade-Offs