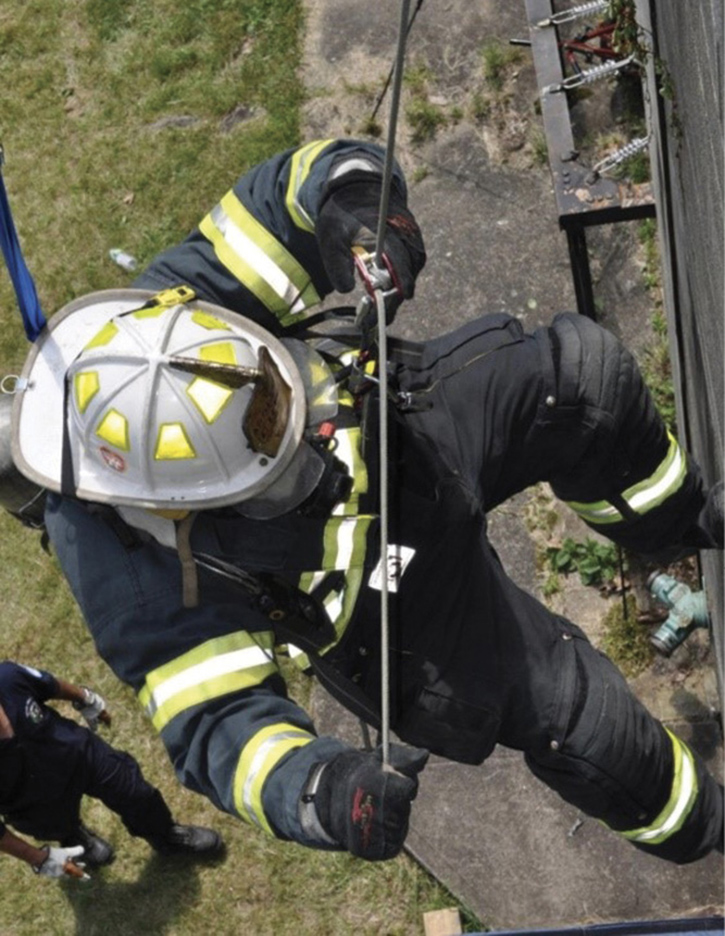 Three of the worst days in my fire service career were when I lost fellow firefighters from off-duty traumatic circumstances. Those days were filled with sadness, anger, and heartache. They were extremely difficult to cope with. It is especially distressful for department members when on-duty firefighters make a choice to bail out of an upper floor of a building in lieu of being burned. Sadly, this has happened more than once.

On October 2, 2009, smoke and fire were pushing out the front (A) side of a three-story apartment fire in Yonkers, New York. Fire crews stretched lines and attacked the fire on the first floor. In quick manner, the attack crews announced the fire was knocked down and teams were checking for extension. Yonkers Fire Department Rescue 1 arrived with four personnel. Their assignment was to search the structure for possible persons trapped on the third floor. The officer and one firefighter searched a lower floor while Firefighters William “Billy” Kanych and Patrick Joyce went to the third floor using the enclosed stairwell on the D side toward the rear. 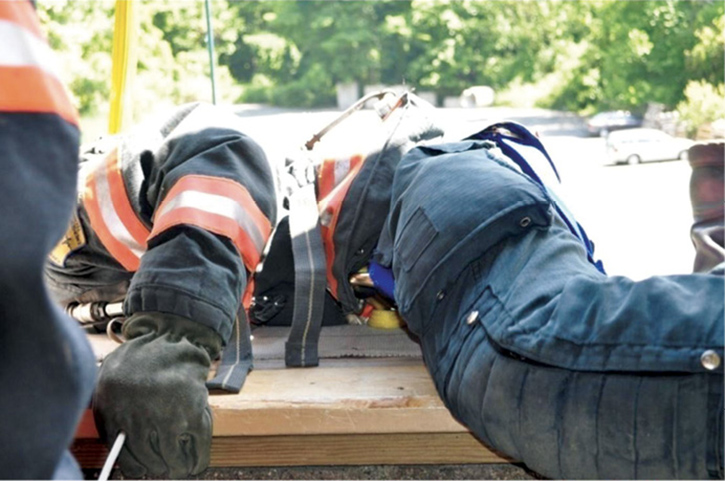 (1) The firefighter rolls out the window and onto the wall. (Photos 1-2 by William Kanych.)

(2) The firefighter descends with the personal escape system.

With the fire knocked down, Kanych went on air and, in full personal protective equipment (PPE) with the exception of his fire hood, went to force a door on the third floor. The enclosed stair to the third floor was on the D side. At the top floor, what should have been an exterior fire rated door was a lightweight plywood interior door. Kanych forced the door and was unsure if he closed the door. The door was left open.

With good visibility, Kanych and Joyce checked the first bedroom they came to, which was on the B/C corner. There were no victims. Then, the crew continued to search toward the street. The interior of the third floor had light smoke that rose through the interior stairwell they passed. The third floor was clear of occupants. They walked back through the clear hallway toward their entry point, the exterior stairwell. Kanych wanted to make one more check of the B/C bedroom. Inside the bedroom, he looked left, then right, and then turned around into what instantly became zero visibility and high heat.

In less than a few seconds, several things happened simultaneously. The fire in the front bedroom was knocked down. Ladder 74 Lieutenant Joseph Murray and his firefighter were ascending the rear stairs to assist with the top-floor search. The arsonist had set a second fire on the first floor, rear bedroom, which was unnoticed and waiting for oxygen. This room flashed when oxygen was introduced to the room. The fire raced to the third floor, then in through the open doorway. Wind drove fire and heat onto the firefighters.

As Kanych turned around, Murray dove into the room and told the crew to get down. The fire and heat were like a blowtorch through the open door. They dropped to their knees, moved away from the heat, and moved into the bedroom on the B/C corner. While looking for the doorway, Kanych turned into a closet. He could feel his ears and neck burning. Murray yelled out that he had found a window. The crew moved toward him. Kanych used a halligan to push out a window air-conditioner and cleared the window. The opening brought the blowtorch on top of the crew. With no time to use their bailout kits, one after the other, the firefighters jumped out of the third-floor window. The jump was fatal for Joyce. Murray and Kanych suffered serious injuries.

Bailout Kits Were Not Enough

During this event, Yonkers firefighters had a bailout rope and carabiner. The men trained on bailout procedures. Kanych said that if you had asked him before the jump if there was time to find an anchor for the rope, he would have said yes. After the incident, he said: “When in that situation, you have only a second or two. If a radiator was under the window, maybe you could wrap that; otherwise, your body will not let you leave the window to go into the heat to wrap an anchor.” 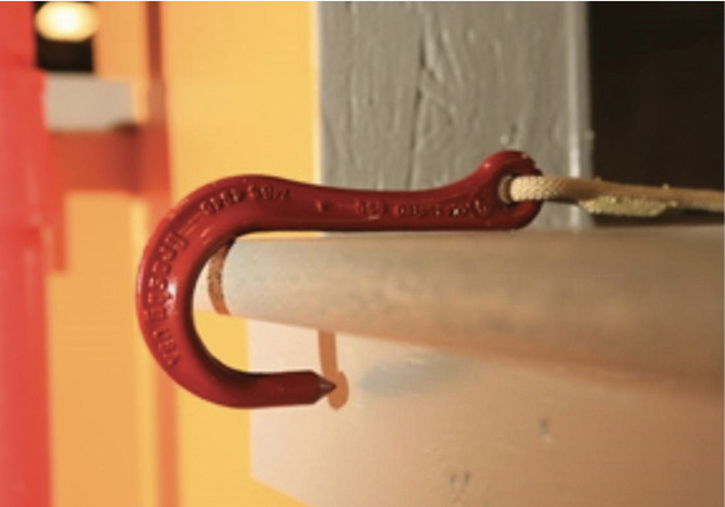 (3) A hook is secured to the windowsill before the firefighter exits through the window. (Photo by William Kanych.) 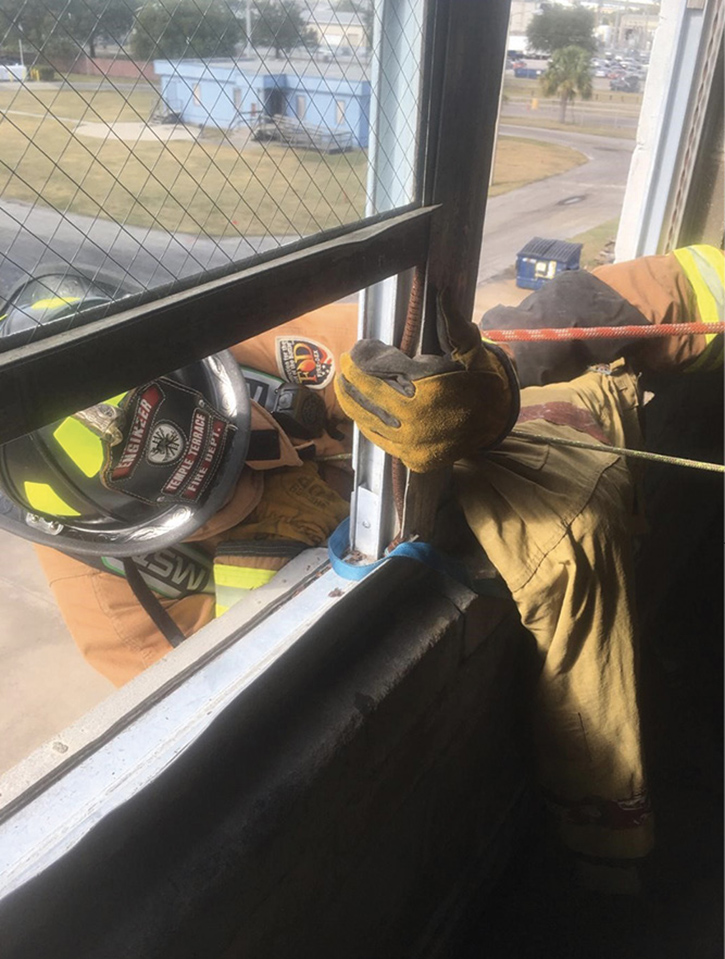 (4) Some windows are narrow and difficult to exit. You may have to remove the sash. If time permits, smash out the window with a striking tool. (Photo by author.)

Yonkers has moved to a hook-based bailout system that can catch the windowsill. According to Kanych, a fire instructor at the Westchester County Fire Academy and the lead instructor for bailout training for Yonkers Fire, this system can be used at the exit window and eliminates searching for an anchor. This system could have made a difference on that day. Training on this technique is vital.

How Much Time Do You Have?

Based on the conditions in Yonkers that day, you would have had a few precious seconds. Taking seconds to wrap a tool or breach through gypsum board near the sill may not be feasible considering the ongoing struggle between your mind telling you to get out and your ability to go back in to find an anchor. Firefighters must train on hook-style anchors to get out rapidly. These anchors are the least secure when it comes to staying in place, but they may be all that you have.

The unknown oxygen-starved fire in the back of the building contributed to the outcome in Yonkers. Kanych noted that if you can compartmentalize yourself from the heat by closing a door, that would give you more time. If you can get in a room that is away from the fire, maybe you could move into another room farther from the fire and increase survivability.

Closing a door to separate yourself from blowtorch conditions can buy time to find a more secure anchor. If firefighters have a bailout system with them, a minimal amount of time would be needed to secure onto some type of anchor before the bailout. There will be no time to review the steps needed when a room becomes untenable. Finding the best anchor that will be suitable is a luxury for which you may not have the time. Knowing options for an anchor may save your life.

Jumping or Bailing Out

First, see if there is a way to make the situation more survivable. Is there a door that can be closed or any other thing you can do to make the room survivable for a few more moments? Is there a ground ladder at the windowsill or a balcony to which you can evacuate?

Make an early “Mayday” radio transmission of what you are about to do. There may be an alternative you may not have considered. If you are successful in bailing out of the building, you may need immediate medical attention or have to be picked off the structure with a ladder.

If a rope bailout is the path you must take, you must secure to an anchor. Take Kanych’s advice and know how to hook the window. Some of the more secure anchors may take time you won’t have. 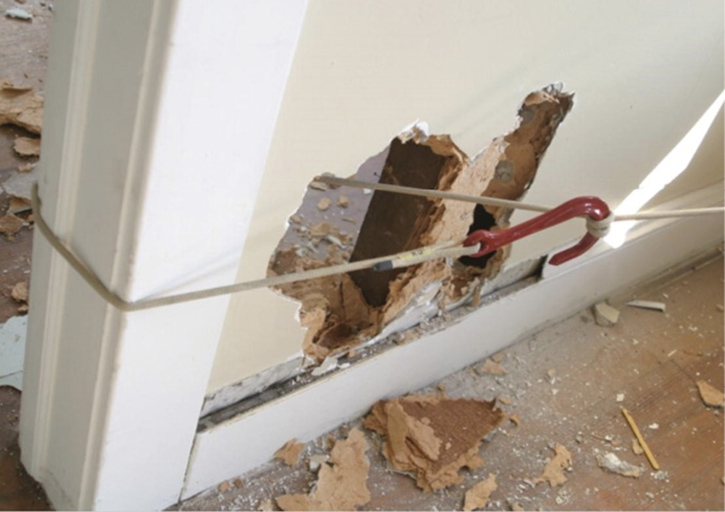 (5) The wall is breached, and the studs are wrapped for an anchor. (Photo by William Kanych.) 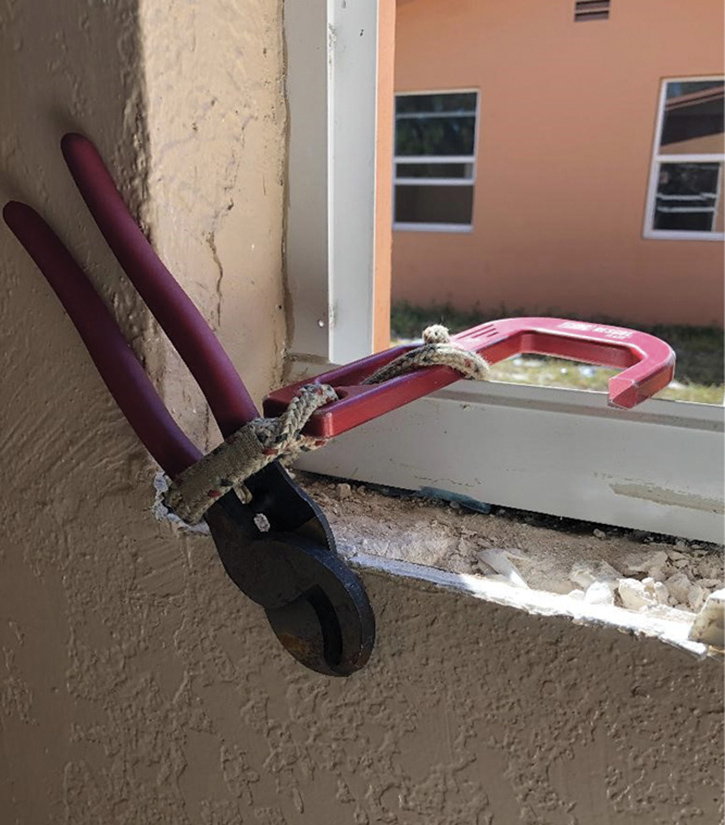 (6) A wrapped tool is placed in the interior corner of the window to anchor the personal escape system. (Photo by Daniel Moran.) 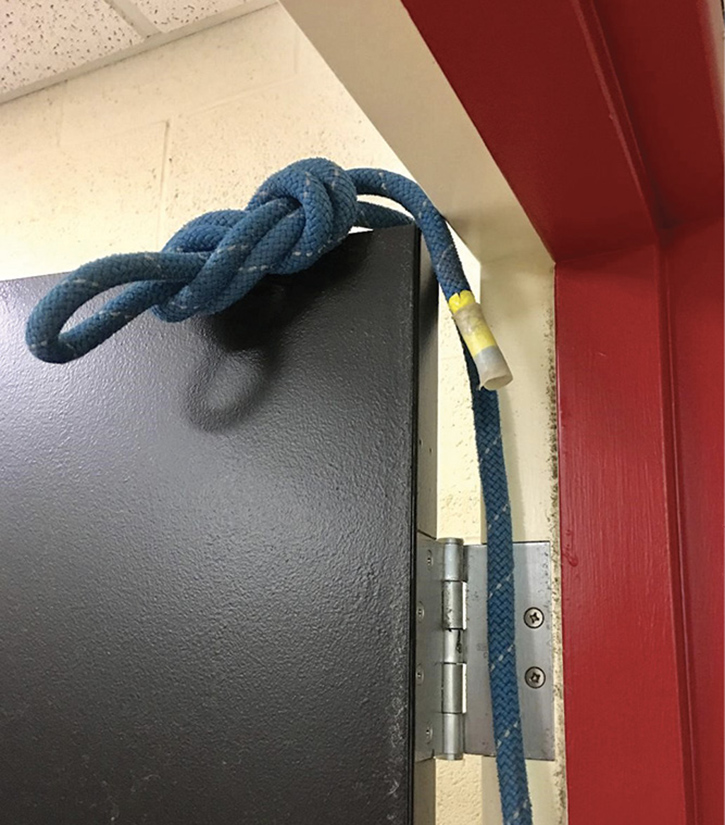 (7) Place a rope with an end knot over the top of the door and beyond the hinge. (Photos 7-9 by author.) 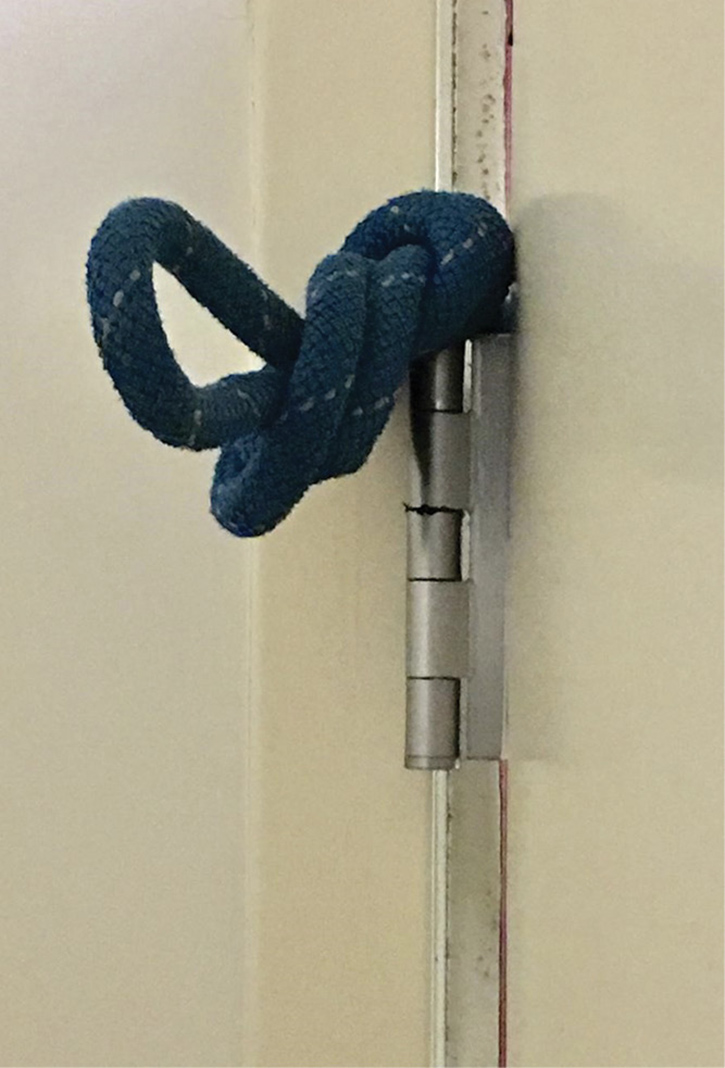 (8) The opposite side of the same door showing the knot sitting on the top of the hinge. 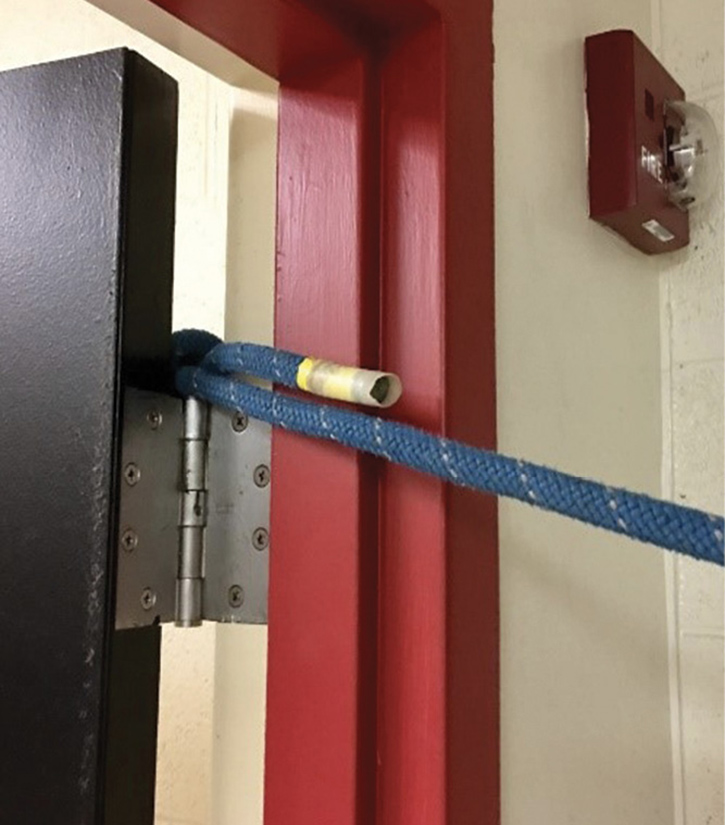 (9) The knot is slid on top of the hinge and tensioned toward the direction of the exit.

If the interior hallway is untenable and you make it into an apartment, shut the door. Does this apartment have a kitchen pass-through adjacent to the living room from which you can bail? Pull your rope through the pass-through and the kitchen doorway and join the ends. Wrapping a section of wall is a great anchor.

Using the carabiner around a rope is a fast but weak way to wrap an anchor. When the tension is pulled on the side of the rope, it lowers the rope’s breaking strength compared to a basket-type configuration.

Does the kitchen have a refrigerator you can wrap with your bailout rope? If so, wedge the refrigerator into the doorway. You may need to tip it onto its side to prevent it from passing through the doorway. Refrigerators are bulky and will not become deformed by the tensioned rope.

Do you have a tool and time to breach an interior wall? Use your tool to smash the gypsum board in two areas to capture two or three wall studs. Wrap the rope through the two openings you created and join the rope ends. Walk your bailout device toward the window and roll out.

Do you have a halligan or another tool you can wrap with your bailout rope and slide into the wall adjacent to the window you are using? With this technique, you must keep tension on the rope between you and the anchor.

Do you have a bulky knot on the end of your bailout rope? If so, place it over the top hinge of a door. If there is a way to wrap around the hinge, that would be more secure. After you place the rope over the top hinge, close the door. This makes the room more tenable and decreases the size of the gap between the door and the jamb, which reduces the chance of the knot being pulled through the door. (Try this before you doubt its ability to work.) This technique is very quick.

Time to execute emergency bailouts is limited and precious. If you have the few extra seconds (which is doubtful in most circumstances), pad the rope where it will come in contact with a harsh turn or rough surface.

It is our responsibility to know and be proficient in the use of the equipment available to us, especially a bailout kit. Many firefighters discount the need for refresher training after they initially demonstrated the bailout technique when the kit was first issued, but you, your fellow firefighters, and your family need you to know this skill without hesitation.

JEREMY RIFFLARD is a captain with the Fort Lauderdale (FL) Fire Department. He is a rescue team manager on FL-TF2. Rifflard delivers technical rescue training to military responders through L2 Defense. He is the owner and program manager for TechnicalRescueTraining@Yahoo.com. He is the lead instructor for the Structural Collapse Technician program at Coral Springs Regional Institute of Public Safety.