Just like you, in my recruit class we learned about the fire triangle. Then, the well-intentioned instructor shared the mysterious chemical reaction side, making it a tetrahedron. We were taught that by “breaking one of the sides” we would extinguish the fire. There we were, all smiles, eager for our first fire. It was so simple, we could quickly, easily vanquish the red devil, the evil dragon, take away the heat with a sweep of our nozzle. It worked every time in training fires. Then we went to a real fire and found out it was a little more complicated.

Soon after recruit school I went to two house fires that provided some significant post-traumatic motivation and growth: three dead kids in one fire, a entire family of five in another. It was not so simple, and I instantly learned that it was a really serious game. Years later, at FDIC, Chief Brunacini would accurately describe fire as: “A mutual murder contest, the fire shows up to kill everything, and you show up to kill the fire.”

So I studied private dwelling fires to become a master of my craft (or at least better at it) and learned the following: House fires are 75 percent of working fires, loss of life, injuries and dollar loss in the US to fire. Residential fires are our most important alarm.

I taught house fire strategy and tactics at our training center for years. I faithfully passed on what was taught to me. Thanks to the UL and NIST work we now have data, facts, measurements, and observations of the critical factors and conditions that dictate the fire progression for house fires and on which we can base our strategies and tactics. Based on this new knowledge, I have modernized and improved some of the tactics and strategies I taught for years.

The interior search team does not prop the door open anymore; command makes sure water is coming in front of, concurrently or immediately behind them; we don’t take the windows until the line is in place and close to or actually flowing; we don’t climb down the “chimney” (interior stairs) if we don’t have to for basement fires; we sometimes apply water from the outside when it is tactically appropriate, then quickly get inside and get it; and we move the nozzle in circles a bit slower.

In 2014, I was very fortunate to be selected to the UL tech panel for the research titled, ”The Impact of Fire Attack Utilizing Interior and Exterior Streams on Firefighter Safety and Occupant Survival.” Working with and just being around folks like Steve Kerber, Dan Madrzykowski, Robin Zevotek, and Keith Stakes, and having access to the wealth of knowledge and experience of the other tech panel members, was priceless. The complexities of these deadly fires became a bit clearer. The question became how to demonstrate this or at least open the minds of those smiling and eager faces in the probie classes. I developed the “fire decagon,” which incorporates a few of the complexities we examined in the study.

Clearly, a static,10-sided, one-dimensional figure is inadequate to represent the fire dynamics of a modern house fire, the interactions of our ventilation and fire suppression, and the exotic chemical reactions that are going on in a house fire. It is, however, a huge step forward from the fire triangle, especially for our recruits. It will hopefully get them started on the right foot and perhaps sway some of the naysayers.

Modern House Fires: Effects of Research on Strategy and Tactics

You can add or delete or otherwise tie the listed factors in to the complicated things that the fire is doing at a house fire. The model is surely not a one-for-one association, but the fire decagon helps convey the critical interactions of conditions that are present and changing in a house fire. When you start drawing your arrows around from point to point in the decagon, it looks like a bullet pinging around.

Additionally, as teaching points and using with the simple animations of a PowerPoint, instructors can connect these critical factors to demonstrate lessons (fireground effects) that will be of value to firefighters during operations. One of the main points for your probies (and maybe to update your experienced guys) is this: like the simple lesson of the fire triangle (break one “leg” and you are an effective firefighter), their tactics on the fireground will have a profound effect on the other factors and consequently the overall fire. Not all of those effects may be positive! In the 2015 FDIC Preview, “There Is No Such Thing as Extreme Fire Behavior,” Fire Researcher, Stephan Svennson said: “The fire simply follows the conditions given, whether we know them or not.” This oversimplified decagon may help us all understand, demonstrate, and visualize those conditions a little better and help us comprehend the effects of our search, suppression, and ventilation on the overall outcome of the mutual-murder contest.

Feel free to modify this model as necessary to make it applicable to the points you are trying to help other firefighters understand. 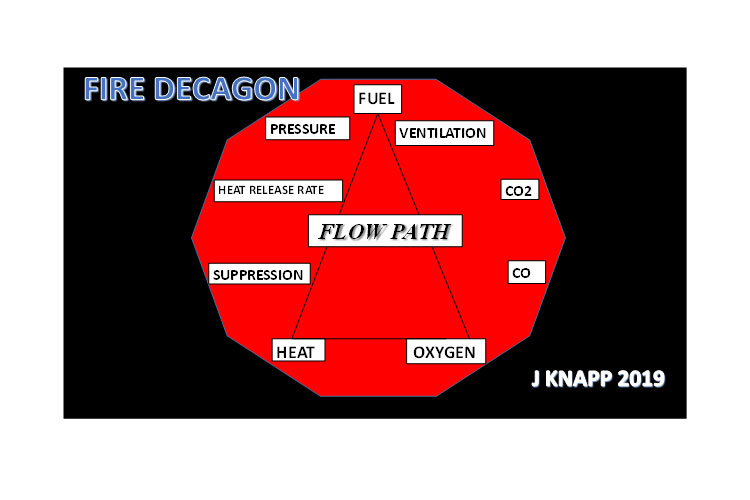 Fuel. The fuel package in modern house fires is deadly. Additionally, smoke is fuel. The solid, oil-based plastics that are burning are producing volatile fuel (smoke), leading to spectacular flashovers, backdrafts, and flow paths that can kill or injure us.

CO2: Fires produce CO2, slowing fire development, i.e. rollover. At 1,100ºF, it breaks down into CO molecules. At 1,150ºF, the CO lights up, driving flashover. The chemical equation is not that simple, but the effect remains as dangerous as described.

CO and Oxygen: Want to see where and how fast CO levels climb to deadly levels in a house during a one-room fire? Visit ULFIREFIGHTERSAFETY.COM and look at the live burn results in the fire attack project.

Carcinogen: Smell that? hat is what cancer smells like…ahhhh, nothing like a good stinky set of gear. You can’t see it or smell it on the decagon, either, but don’t worry, your doc will find it for you in one of your organs in 10-20 years.

Heat: House fires can produce up to 2,000ºF. Radios and SCBA fail at 400ºF. Do you know how your gear performs at those heat levels?

Suppression: Will you order the same suppression techniques that burned two firefighters to death with hose lines in their hands in 1999? That’s 20 years ago…is it time to modernize? Don’t let these guys die in vain.

Pressure: Something I was never even made aware of, but it moves the fire from one place to another, along with other factors in the decagon.

Use the data from the various UL studies to add to the simple explanation of the samples above.

Although “hope is not a plan,” I hope the fire decagon will help you explain a very complicated fire, the house fire.

JERRY KNAPP is a 42-year firefighter/EMT with the West Haverstraw (NY) Fire Department and a training officer with the Rockland County Fire Training Center. He is chief of the hazmat team and a technical panel member for the Underwriters Laboratories research on fire attack at residential fires. He authored the Fire Attack chapter in Fire Engineering’s Handbook for Firefighter I and II and has written numerous articles for Fire Engineering.