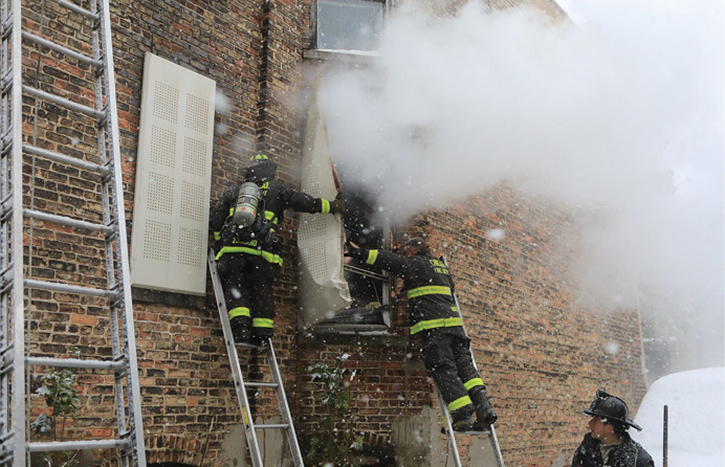 Thursday, October 31, 2019, was Halloween. The weather in Chicago was horrible. The day began with rain that later changed to a heavy, wet, and wind-driven snow. By 1400 hours, visibility was reduced to one block, approximately 600 feet.

At 1448 hours, fire was reported in the 4000 block of West Lexington Street. Chicago (IL) Fire Department (CFD) Engine 95 had just been assigned to an emergency medical services (EMS) call. The Fire Alarm Office realized the engine was just a few blocks from the reported fire and radioed the crew to disregard the EMS run and to take in the still alarm. The initial response included Engines 95 and 113, Trucks 26 and 48, and me (Battalion 18).

Truck 26, under the command of Lieutenant Jim Pascalo, arrived first. Pascalo reported on the scene, but because of the wind-driven snow and low-hanging smoke, he was unable to see the fire building.

I arrived seconds after Truck 26. I saw that there was a heavy smoke condition coming from a two-story building of ordinary construction approximately 25 × 40. The fire appeared to be in the basement. Additionally, the building was protected by D.A.W.G.S. (Door And Window Guard Systems), a vacant building security system (described in detail later), on all basement and first-floor doors and windows.

During my size-up, I noted the rear basement door was open. The D.A.W.G.S. door had been removed by vagrants. This area of Chicago is known for a large number of drug addicts and homeless people. I reported a working fire in a vacant building, which requires a safety chief.

Considering the possibility that there may be human life at stake, I ordered Engine 95 to lead out to the rear and ordered Truck 26 to conduct a quick primary search, which proved to be negative. At this time, I ordered an emergency evacuation of the building. Additionally, I requested a still and box, bringing Engines 44 and 107 as well as Tower Ladder 14.

I ordered Truck 48 to remove the D.A.W.G.S. panels on side C. Truck 26 worked on gaining access on side A.

Squad 2 responded on the report of a working fire and took tools, including a battery-powered hydraulic spreading tool, to side B. Members removed panels from the basement and first floor (photos 1-3). 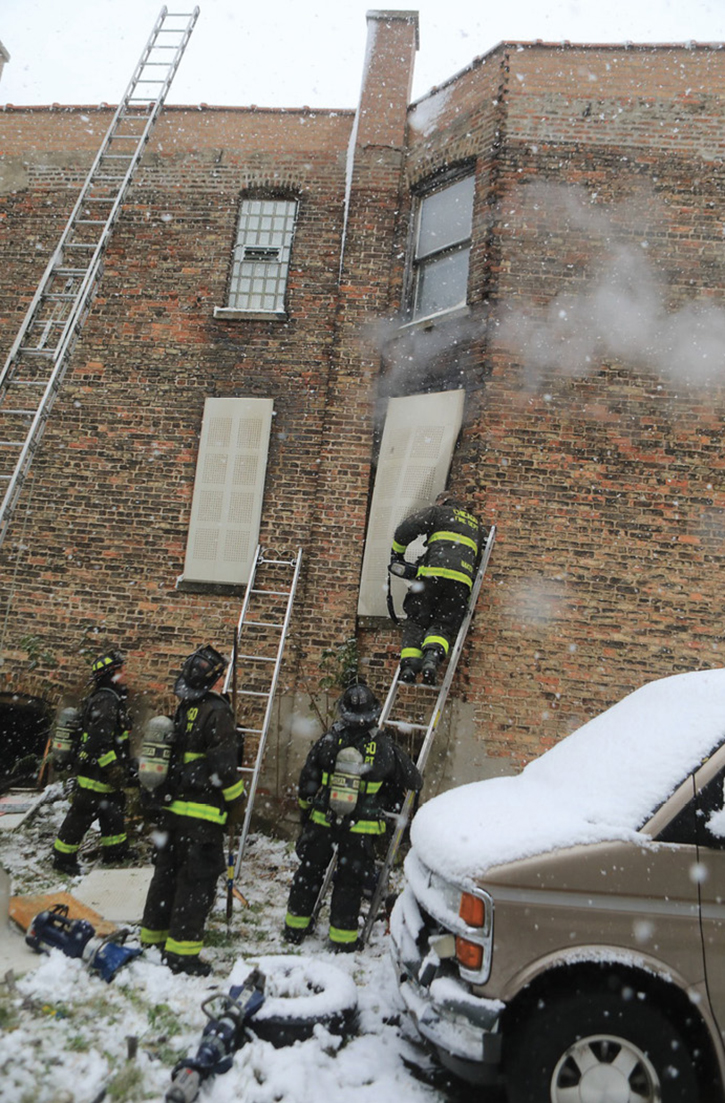 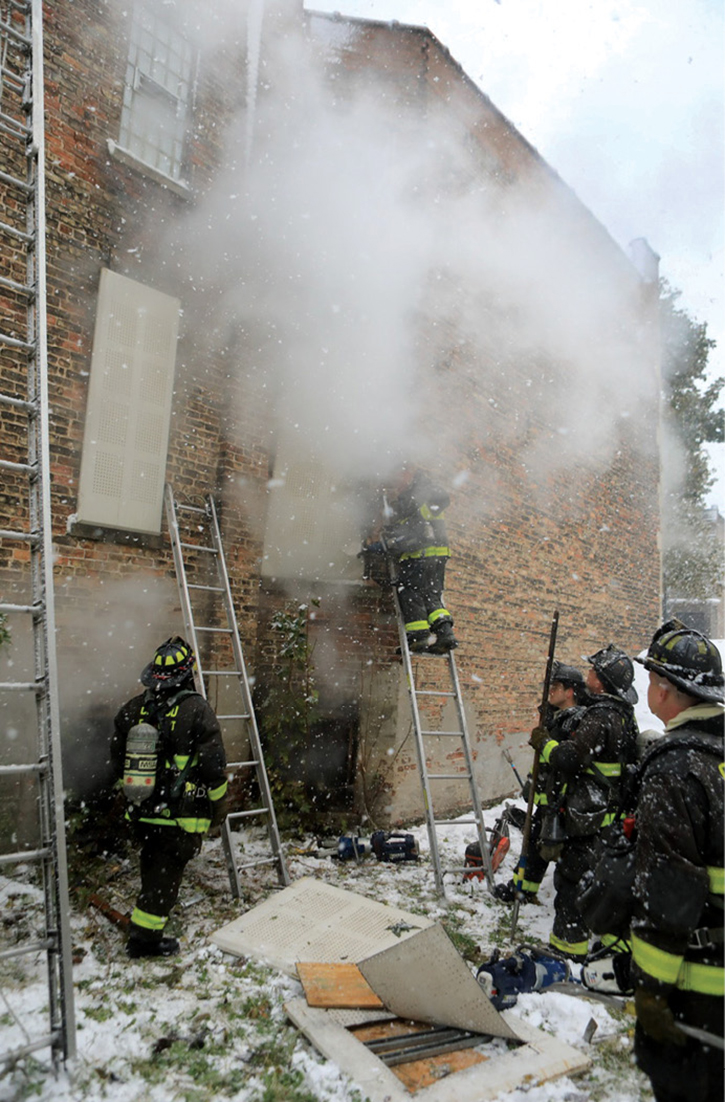 Tower Ladder 14 arrived on the still and box alarm and was ordered to work on the D side. All members working on the first floor were forced to work off ground ladders.

Engine 113 was the second-due engine. Captain Kevin Newell had his members lead out to the first floor of side A. They stood by as Truck 26 removed the D.A.W.G.S. (photos 4-5). 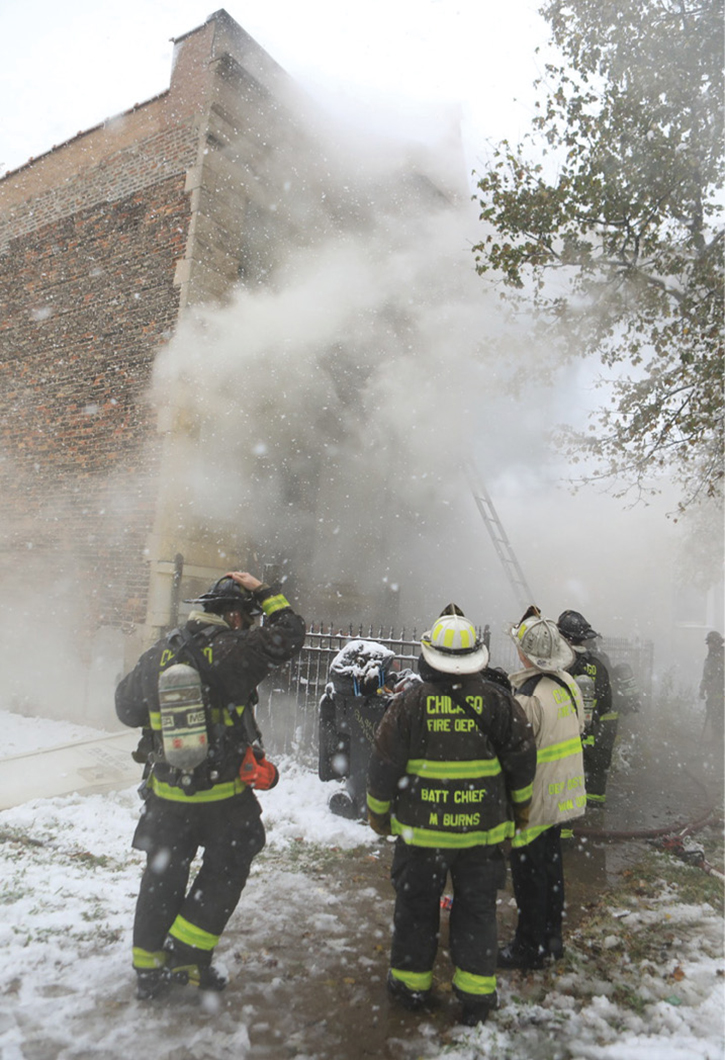 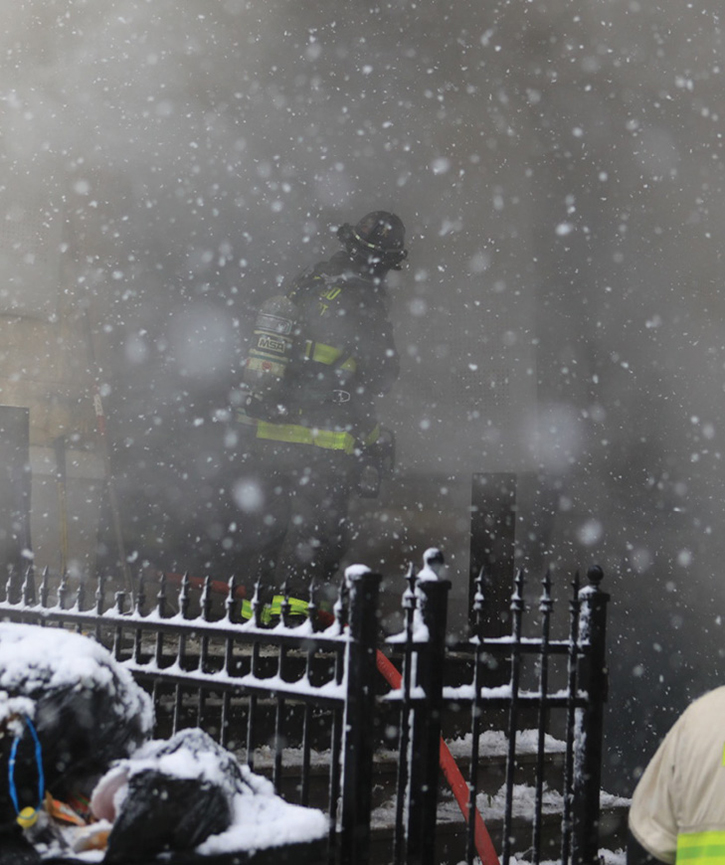 Battalion 17 Chief Mo Demus was dispatched as the safety chief. He operated in the rear of the building giving progress reports.

Deputy District Chief John Van Dorpe of the 4th District arrived and, after confirming with me, took command of the fire. Battalion 7 Chief Pat Chambers arrived as the still and box chief. He was ordered to assume interior operations as companies slowly made their way back into the fire building. Removal of the D.A.W.G.S. allowed interior access and ventilation of the fire building.

Engine 95 was able to reenter the basement from the rear to extinguish the bulk of the fire. Engine 113 was able to work a line throughout the first floor. As access and ventilation allowed, Engine 107 was able to stretch a line up the interior stairs in side A to the second floor and kept the fire from traveling up the interior walls to the cockloft.

Van Dorpe requested an additional truck to help with the considerable overhaul. Truck 7 arrived, and companies were rotated and rehabbed.

As conditions improved and companies reported making good progress, Van Dorpe was able to strike out the box alarm. Companies remained on the scene, performing overhaul for several hours (photo 6). 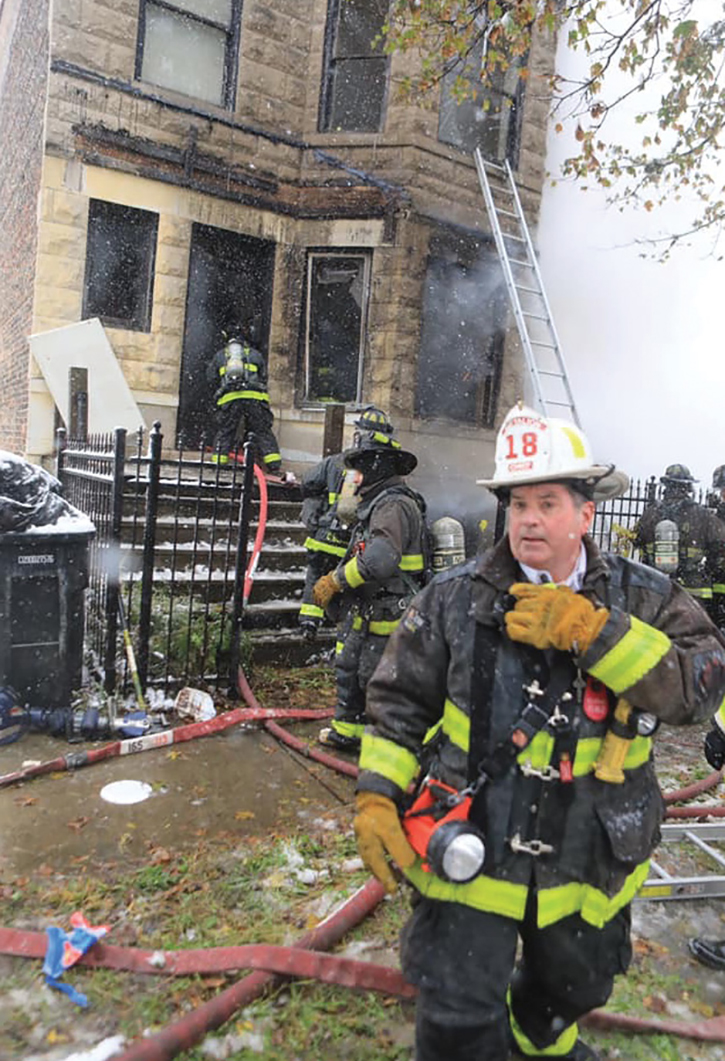 D.A.W.G.S. consist of steel panels installed over doors and windows that are secured to an opening using a mounting bar, installation beam, threaded rods, and hardware. Defeating them takes a great deal of effort.

Remove the window panels by making two parallel cuts, vertically deep enough to sever the installation beam. Make these cuts along the outer edges of the panel’s ventilation holes (photos 7-9). 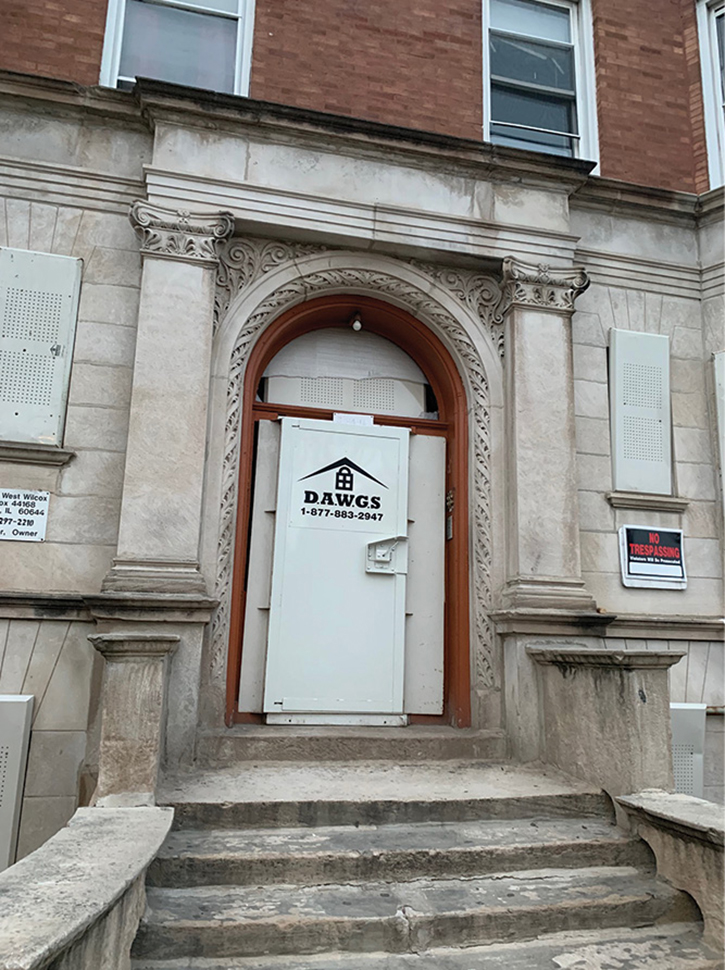 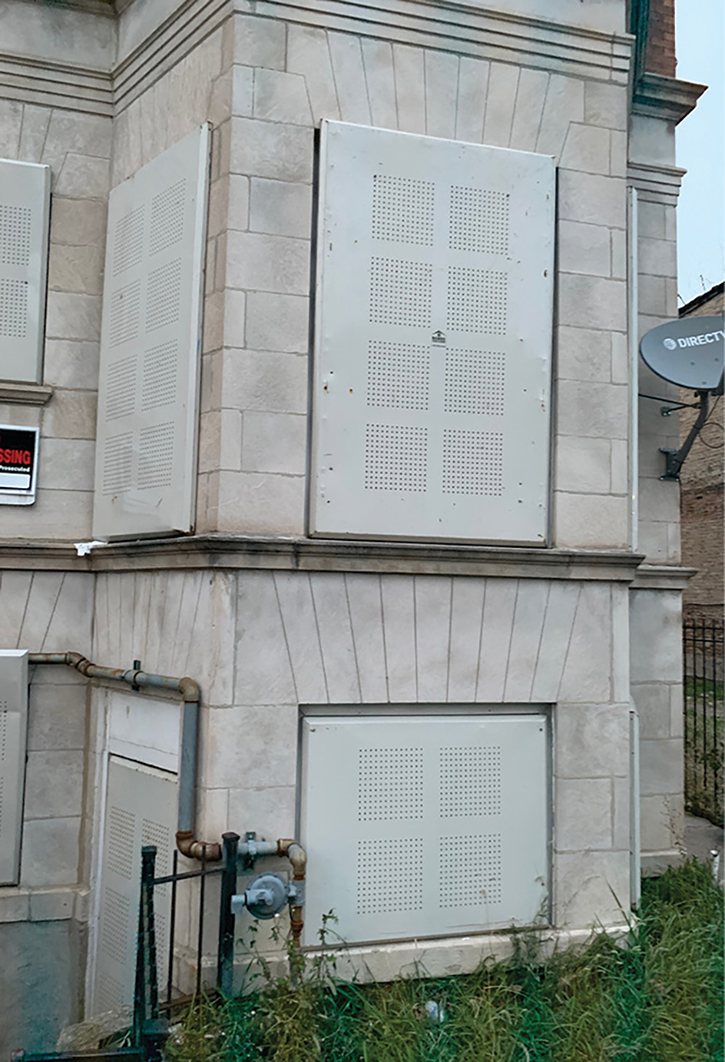 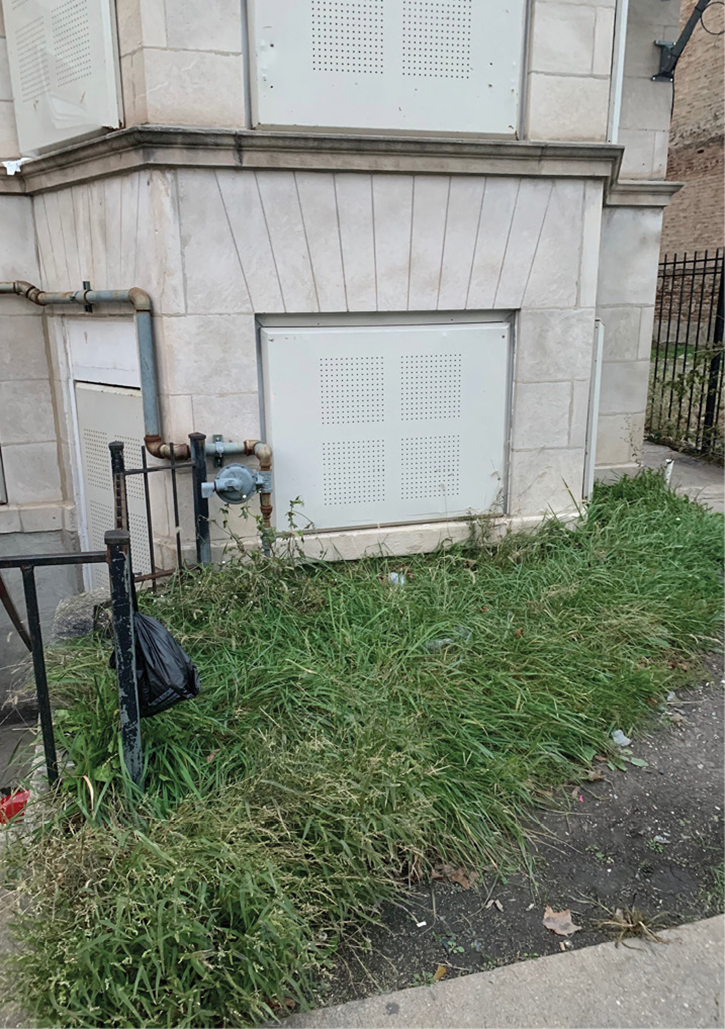 The entry door in D.A.W.G.S. is installed similar to the window panels. On the exterior is a rectangular box covering the locking mechanism. A padlock protects the mechanical release. Pushing down on the mechanical arm releases locking pins on the top, on the bottom, and traditionally where the deadbolt would be.

A quick way to gain access through the door is to use a metal cutting saw and make a triangle cut. You can make this cut in the center of the door, even with the locking mechanism. You can then reach in with a gloved hand and depress the inside handle, releasing the locking pins.

At the Lexington Street fire, truck companies found it more expedient to use their battery-powered hydraulic spreading tool to “push” the panels away from the window opening by positioning the tip of the tool between the metal panel and the surrounding brick. The only drawback is obtaining a purchase point big enough to ensure the tool can “bite.”

Additionally, Squad 2 brought a battery-powered hydraulic spreading tool to operate on the D.A.W.G.S. The tool tip is flat, similar to a rabbit tool, making it easier to seat the tips behind the panel. Again, members used the tool to push the panel from the building, defeating the mounting bar. These panels are very heavy, so take care not to drop them on firefighters working below.

Because of their experience and constant training, the members of the CFD were able to overcome many obstacles at this incident and performed to the highest standards.

Mike Burns is a battalion chief/paramedic for the Chicago (IL) Fire Department’s 18th Battalion with 38 years of experience. He has been assigned to ambulances as a paramedic, was a firefighter on a tower ladder, and was a company officer on engines and a truck.