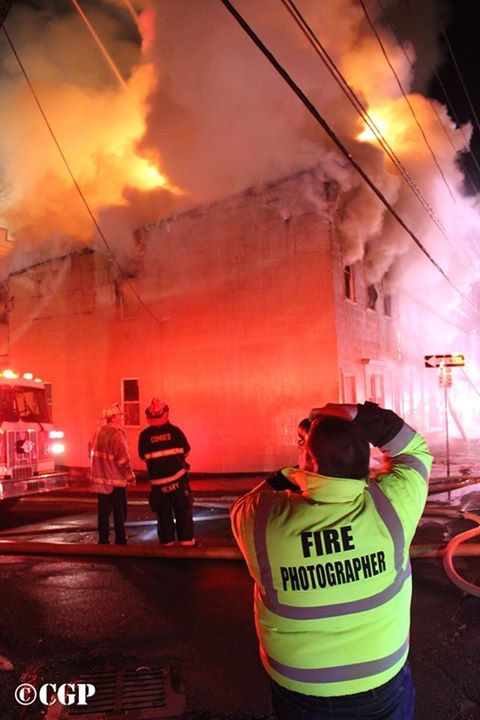 Jeffrey Belschwinder of Sidewinder Photography took some time from chronicling fire incidents in Upstate New York to tell Fire Engineering about his work and art.

FE: What got you started in fire photography?

JB: I grew up around my mother always taking pictures of everything and so when I was young I decided to pick up the camera and when I joined the fire department I mixed my love for the fire service with my passion of photography. I also got in to it ’cause you would only see one or two photos or short videos of the fires in my area on the news. When I would ask if anyone had more photos, the answer was always the same–no–so I decided to start my own photo company, Sidewinder Photography, and show to the world everything that is happening in Upstate New York around me.

FE: What kind of equipment do you use?

FE: What have been some of your more memorable jobs?

JB: The two most memorable fires I can remember were both in the dead of winter with negative temperatures. The first one was on Christmas Eve in 2014 in the city of Schenectady, New York. My fiancé and I were on our way home from a family dinner and we saw a line of police and fire apparatus flying at a high rate of speed going  the same way we were going. I decided to follow and as we got closer we could see a very large glow in the night sky. I parked and walked in to the scene and all you could see was a city block of fire. The fire was located on Moyston street and multiple houses were heavily involved and firefighters scrambling on scene to trying to stop the rapidly spreading fire, but that night the wind was blowing about 30 MPH and the temperature was about -10 degrees outside; they were fighting the elements as well as the fire. The other fire was the Bethlehem industrial fire in 2015 in Selkirk, New York. I received the call while on my way home and turned around and headed to the scene. I arrived on scene and there heavy smoke pushing from the back of the warehouse. By the time I got to the back of the building where firefighters were operating, the fire had pushed thru the roof of the building. I took some of the best photos of my career that day.

FE: What’s unique about the area you cover–the place, the firefighters, the hazards, etc.?

JB: I cover the Upstate New York area and every part of it is different. This makes it very unique and sometimes difficult for myself as a fire photographer to do my job. In one part of the area you can have a heavily populated city while the next town over is farming county. The weather plays a huge role up here, and also affects the way you take your photos. The winters you can be taking photos in -20 degree weather with snow up to your knees or summer you can be taking photos in 90-degree temperatures with the summer sun beating down on you. Firefighting varies so much in each area, along with tactics from the way you get your water supply to the way you fight your fires. Upstate New York is its own animal.

FE: What have been some of your more memorable publications?

JB: The most memorable publication came from a school bus accident I took pictures of in the town of Pittstown, New York. It was a fatal accident that occurred on one of the busiest roads in Rensselaer County. The road the accident occurred on is known for some of the worst accidents in the area. The school bus when I arrived on scene had been hit head on and the car that hit the bus ripped off the front axle of the bus and knocked off the axle off the back of the bus. The driver of the car was killed, and the driver of the bus was able to remove all the children from the bus safely. Only one child was sent to the hospital to be checked out. The damage field went for close to a quarter mile. The photos to this day are used for training now for other bus drivers.

JB: I recommend you to meet all the chiefs and officers in your area that you are going to be working with when you get a fire or incident in your area you will be covering. Always treat them with respect and listen to them while on scene. Building a good, solid relationship is key to having the ability to do your job. After you leave the fire scene, before posting the photos or publishing them, review them and look for any safety issues that could cause problems for that firefighter or department in the photo later on. I always just deleted them and make sure they never see the light of day. Always practice scene safety while on the fireground and clean up after any fire to remove the toxins from your skin.