Fire departments spend millions of dollars on hose and apparatus, yet the market falls dangerously short in providing safe, effective, and accurate hose testing. Often overlooked, National Fire Protection Association (NFPA) 1962, Standard for the Care, Use, Inspection, Service Testing, and Replacement of Fire Hose, Couplings, Nozzles, and Fire Hose Appliances, was developed to ensure the safety of firefighters through an annual testing requirement and a well-defined test procedure. Through advanced technology, FireCatt has engineered computer-controlled hose testing that is accurate, safe, efficient, and technology driven.

Prior to beginning the business, FireCatt members believed the equipment and standard operating procedures used by fire departments continued to expose firefighters to unnecessary risks. Every year, there are major incidents of firefighter injuries – even deaths – directly related to hose testing. Even when departments follow NFPA standards, inherent dangers are created when they perform their hose testing in-house.

One of the most serious injuries occurred in Seminole County, Florida, when a large-diameter hose failure caused the hose to thrust airborne and the coupling to whip down directly on the head of a firefighter, who was flown by helicopter to a hospital in critical condition; fortunately, he survived. The appropriate agencies do not formally track hose testing accidents such as this, but they should seriously consider tracking this all too common and preventable incident.

NFPA 1962 provides a robust standard for testing hose. However, there are conflicts within this standard because of the lack of capable equipment on the market. Specifically, NFPA 1962 calls for pressure increases of no greater than 15 pounds per square inch (psi) per second. Most of the equipment used today pressurizes hose on a manual- or operator-controlled basis. FireCatt has a patented system that builds this control into its equipment. Using a programmable logic controller software program interacting with digital pressure transducers, FireCatt does not estimate the pressurization rate but has integrated it into its system. This allows FireCatt to follow the standard by providing a uniform expansion of the hose during pressurization and the ability to avoid shocking the hose with too much pressure.

The next risk firefighters face when testing hose is a catastrophic failure during pressurization. Manual shutoff of the pump or valve on manual test equipment creates a lag time when removing the dynamic energy from the failed hose, leading to hose whip and back pressure on the test equipment, exposing personnel to unnecessary danger. The FireCatt system is designed to shut off water flow within one-quarter of a second if it senses a pressure drop during pressurization. Shutting off the water flow through a computer-controlled valve system allows FireCatt to eliminate this risk and thus eliminate injury to the hose testers and fire department personnel.

The most glaring concern with the current practices of how fire departments employ NFPA 1962 is when the standard requires that personnel should NEVER (1) stand in front of the free end of the hose, (2) stand on the right side of the hose, (3) stand closer than 15 feet on the left side of the hose, or (4) straddle a hose during the test. All personnel not performing the test shall clear the area; this makes obvious sense considering firefighters’ personal injury risk from hose failures while under pressure. 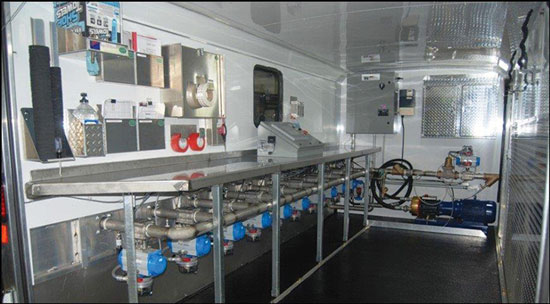 Where NFPA 1962 creates conflict is in its next set of instructions. It states, “Upon completion of the test, a test cap with a bleeder valve shall be opened to drain the pressure.” If you follow the first part of the process, how can you follow the next part? Can you really stay away during testing but then approach the hose and open a valve to relieve pressure?

When FireCatt first developed its prototype and one of its founders was performing the test, he asked the engineers, “If it was not safe to be near the test site a minute ago, why is it now safe for me to go relieve the pressure when the hose is charged to 300 psi?” The engineers collectively answered, “It’s not!” So, FireCatt innovatively improved its system by adding a computer-controlled pressure relief valve designed to create a test environment where no one needs to be near a hose under pressure.

Why should FireCatt’s technology matter? Consider the National Fallen Firefighters Foundation’s 16 Life Safety Initiatives Initiative #8: “Use available technology wherever it can produce higher levels of health and safety.” FireCatt’s technology is the first computer-controlled hose test; the first remote pressure release; the first with an auto shutdown in the event of catastrophic burst; and the first with bar code labeling, electronic storage, and access to test records. In FireCatt’s first 10 years in business, it has tested more than 25 million feet of hose; an additional nine million feet are to be tested in 2017. As a result, ZERO days have been lost to injury.

FireCatt’s beliefs are in step with the fire service: Always look to improve and never accept things if they are not optimal just because you have always done them that way.