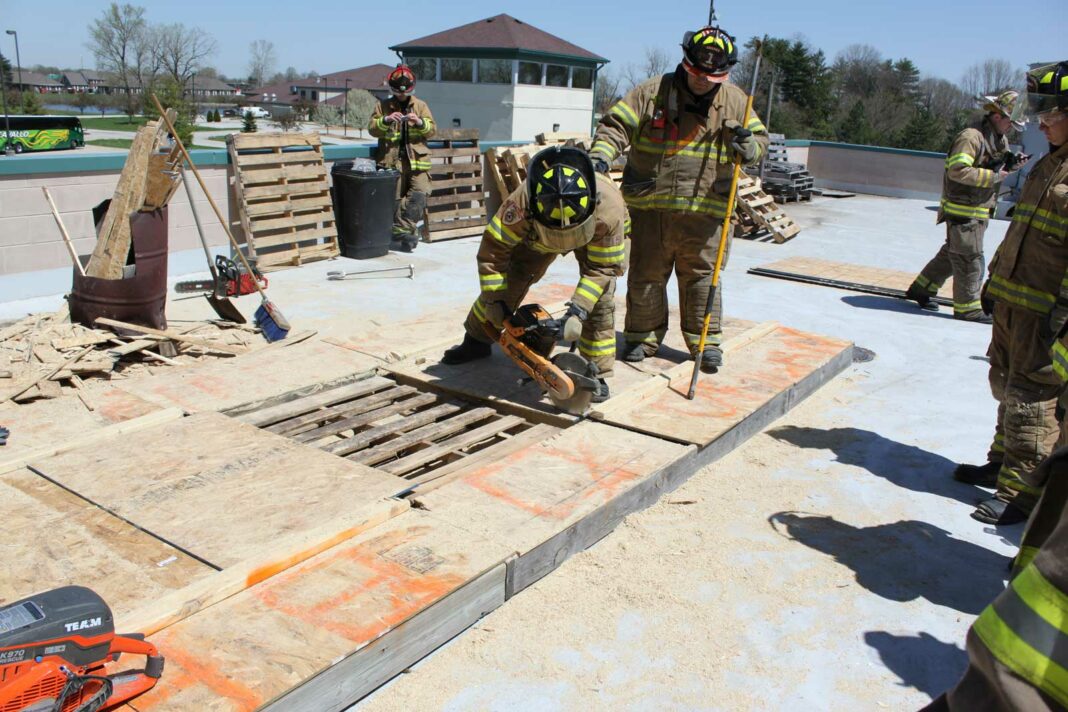 In a previous article we began to look at the topic of flat roof ventilation and explored some different points on the subject. This month we are going to build upon that information and look at two different ways firefighters can ventilate a flat roof: the coffin cut and the square cut.

The two types of cuts that firefighters can use can be made with either a rotary saw or a ventilation saw, depending upon the roofing material. This will require some preplanning prior to going to the roof. The rotary saw will probably be the best choice to choose as most flat roofs involving some type of metal. Make sure the saw is ready to go with fuel and always bring a set of hand tools with you to aid with making the cuts, removing material, sounding the roof deck, and, worst-case scenario, to finish the cut for you. An ideal set of hand tools to bring would be a flathead ax or a pickhead ax and a six-foot roof hook or pike pole.

Getting Ahead of the Top-Floor Fire

THE SAFE USE OF POWER SAWS

The coffin cut is one way to ventilate a flat roof. This cut is also referred to as the 7-9-8 cut as well because of how the ventilation opening is cut based on the sequence of cuts. As you can see in photo 1, there are four sequential steps in making this cut and they resemble the numbers 7, 9, and 8.

The first cut is with the “7” type of pattern. The firefighter will make two cuts in the shape of the number “7” roughly four feet along the top part of the “7” and about six to eight feet along the spine of the “7.” This sets up the coffin cut to be divided into two 4×4 openings, allowing for one large vertical ventilation exit point. The two halves also allow crew members to handle only a small section of the roof, a 4×4-foot section as opposed to one large section.

The second set of cuts transform the “7” into a “9” shape by coming down the tip of the top part of the “7” about four feet and then across to the spine of the “7.” When making these cuts, make sure to overlap the corners by about six feet. This allows the section of roof that is being cut to be free of any obstruction or attachment to the roof. When the corners are not overlapped, there will be more work involved to free the cut section. We need to make sure students understand that we are not making a Swiss watch with nice mitered corners – overlap them to ensure the cut is complete.

The third set of cuts is where the “9” becomes the number “8.” Two more cuts are made vertically down and across to make the number “8.” Once completed, the fourth set of cuts can then take place. This is where a diagonal cut is made in the corner of the “8.” This diagonal cut can be made either at the end of the series or at the beginning with the number “7” or at both points. By cutting the pattern in a diagonal way, it creates a small triangular hole that allows for a roof hook or a pike pole to be inserted. It will aid with the pulling up of the material as a starting point.

It will take some effort to pull up the roofing material as it has been secured to the roof. Once it has been removes, do not let it fall inside the building – place it beside the opening.

The square cut is another way to ventilate a flat roof. The square cut is a shortened version of the coffin cut wherein there are only five cuts made in total. The size of the opening can vary from a traditional 4×4 square to any size. The advantage of the square cut over the coffin cut is that the firefighter making the cut is traveling in one direction all the way around. The coffin cut requires a change in direction, thus providing an opportunity for tripping, unsafe footing placement, or even falling into the hole.

As shown in photo 2, the firefighter will make four separate cuts, all overlapping each other by at least six feet, and then finish the square with a diagonal cut. The opening can be expanded if need be by extending the square further on as required.

There will always be two firefighters making any type of roof cut. The firefighter making the cut must be aware of foot and body placement in relation to the rotary or ventilation saw. The two should not cross each other–if they do, it will hurt! Be aware of all extremities else you may cut yourself or another member. The cutting firefighter must focus on making the cut and thus requires another set of eyes to guide and watch over the conditions, the surrounding area, and any other hazards present.