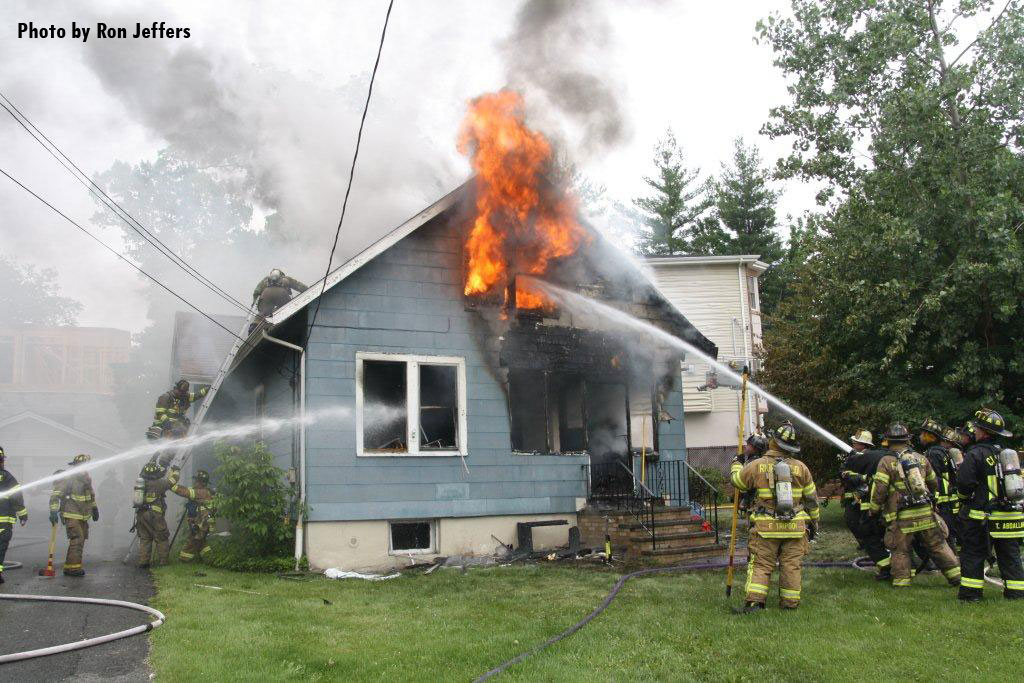 Flames consumed a 1 1/2-story wood-frame dwelling on Westend Avenue in Cliffside Park, New Jersey, and the elderly retired borough police captain that lives there was taken to the hospital for treatment.

SEE PHOTOS FROM THIS INCIDENT >>

Shortly after noon on June 16,  local firefighters were dispatched to a reported house fire on Westend Avenue, at the corner of Aurora Avenue. The full assignment includes an automatic FAST truck from nearby Fairview. Upon arrival, fire units observed flames shooting out of the front door and windows and rear windows on the first floor. Chief of Department Teddy Tarabokija transmitted a second-alarm, which brought in mutual aid companies from surrounding eastern Bergen County communities.

The intense flames and heat melted the siding of a dwelling on Aurora Avenue, which was evacuated. In addition, the rear of a car parked in the driveway of the fire building caught fire causing the airbags to explode. Engine 6 pulled up to the front of the dwelling and dropped tank water through the deck gun to knock down fire. Engine 3’s squirt pulled up on the Aurora Avenue side and put the squirt in operation to protect exposures.  Once handlines were set up, firefighters made an interior attack.

Flames extended up the walls to the attic area as truckmen began to open up the roof. Rich, black smoke began shooting out of the front-attic window followed by heavy fire. Members were ordered out of the structure for a defensive operation. After those flames were quelled, firefighter went back in for final extinguishment.

Borough and county officials were investigating the cause of the fire.