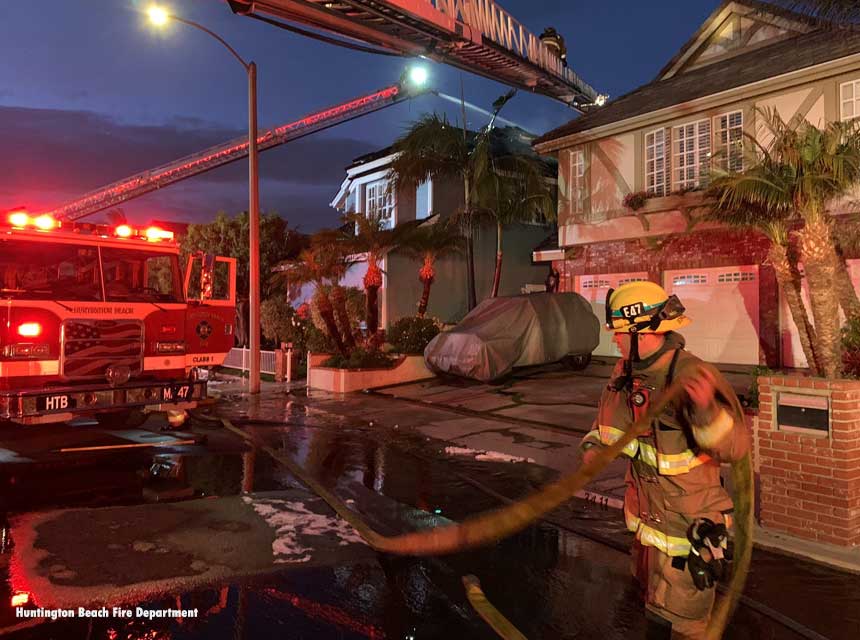 Jan. 20—High winds fueled a three- alarm structure fire that broke out at a Huntington Harbour residence Tuesday afternoon, sending flames into the attic of the home and causing massive amounts of smoke in the area.

“With the high winds, we ‘re protecting the houses around it. Blaska said from the scene Tuesday while crews continued to battle the blaze. “We ‘re worried about embers flying off from the roof — [the fire ] is pretty stubborn, and the attic is pretty big.”

At one point during the fight, embers from the property were blown onto the roof of a home across the street and had to be immediately extinguished.

Blaska said the fire burned holes into the shake- shingled roof of the first residence, preventing firefighters from climbing atop the structure to provide ventilation and aid them in their fight.

“It would be unsafe for us to put someone on the roof, ” he added.

All reports indicate occupants of the property were not at home when the fire broke out, and no firefighters or residents were injured. One housecat was rescued from inside.

The cause of the fire was still being investigated early Tuesday evening as portions of inland Orange County remained under a high- wind warning issued earlier that day by the National Weather Service.

That advisory indicated that northeast winds from 25 to 35 mph could be anticipated until 10 p.m. Wednesday with gusts up to 60 mph and isolated gusts as strong as 80 mph.

Residents were warned of the potential for downed trees or power lines, in addition to possible power outages.