Photos by Bill and Chris Tompkins

Thirty people were displaced by a four-alarm fire earlier this week in Paterson, New Jersey. Fire photographers Bill and Chris Tompkins were on scene to capture some shots of firefighting operations, including shots like the one above, captured from a multi-story building across the street from the scene.

Firefighters found multi-family homes at on Hamilton Ave. in flames when they arrived around 11:30 p.m. Tuesday, reported The Record. The fire was reportedly under control by 3 a.m., and no injuries were reported.

Read more about this incident at http://www.northjersey.com/news/thirty-people-displaced-after-four-alarm-fire-in-paterson-1.1366346 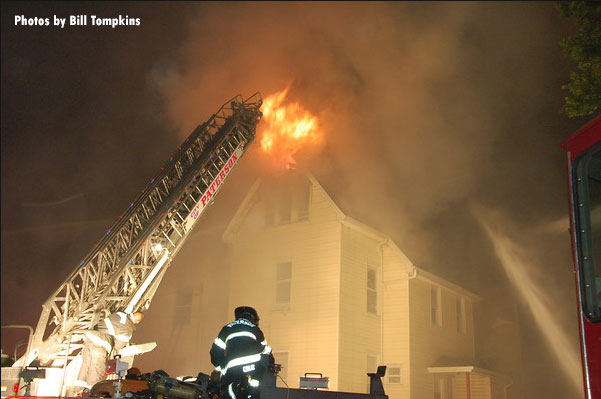 Four people were injured and 28 displaced when a four-alarm fire tore through several homes last Friday in Paterson, New Jersey. Fire photographer Bill Tompkins took some photos from the scene.

The Record reported that a neighbor who helped people at the scene said he saw a woman and two children fall from one of the structures. A fourth victim suffered injuries from smoke inhalation. None of the injuries were believed to be life-threatening. according to the report. A dog reportedly died in the fire.

The early morning fire began in a two-and-a-half story home and spread to nearby homes. Firefighters had arrived on scene around 3:49 a.m. and received assistance from mutual aid.