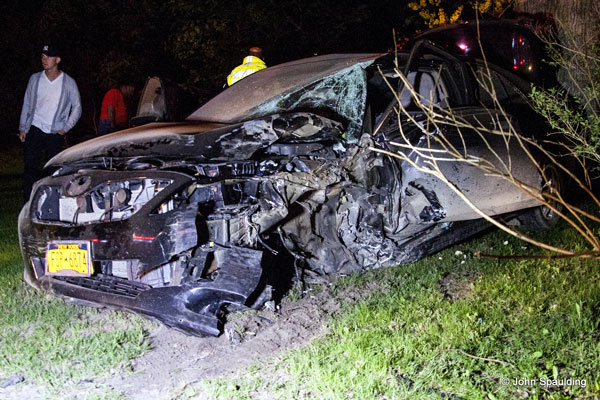 Story and photos by John Spaulding

The Churchville (NY) Fire and Ambulance Services were dispatched for a single-car accident that took place after midnight in Riga, New York.

SEE MORE PHOTOS FROM THIS SCENE >>

The first-arriving chief found a single car that struck a large tree at high speed at a “T” intersection. The car was heavily damaged and in a front lawn. The victims had self-extricated prior to arrival, according to Chief Gary Johnson.

Two paramedic units from Monroe Ambulance were called to the scene.

The intersection where the accident transpired has been the scene of several accidents over the last several years.

Two victims were transported in critical condition to a Rochester trauma center, and the third victim refused treatment and transport at the scene. The Monroe County Sheriff’s Office was conducting an investigation and Jim’s Service from Churchville was charged with cleaning up the car and debris.