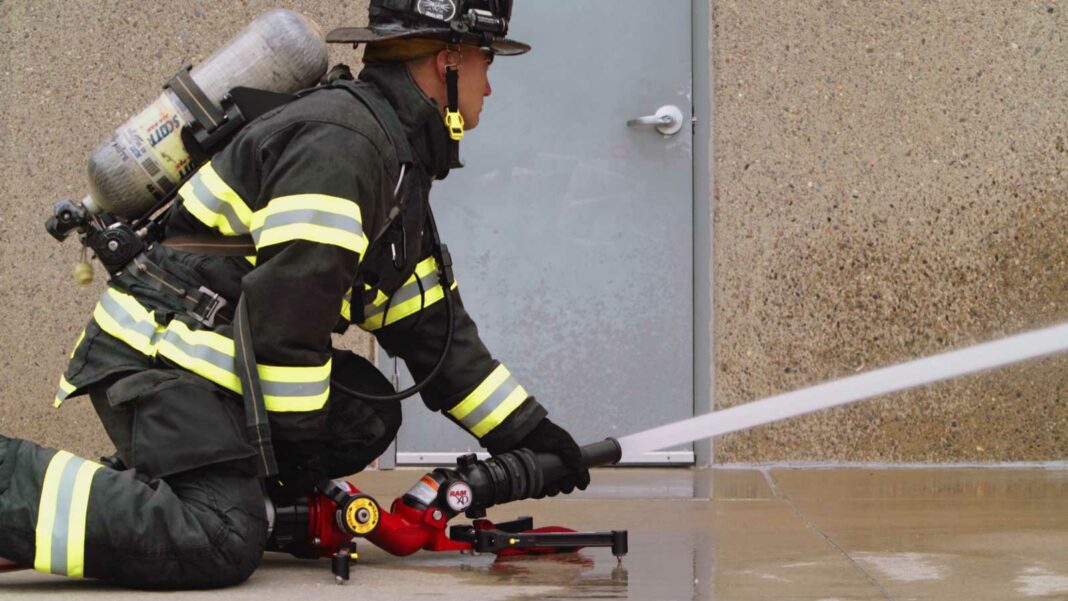 The blitz attack is one way firefighters can get water to and on the fire quickly. So what is the blitz attack? It is not a model of a master stream that is being used but rather a way for large, rapid water application. You may or may not have heard of this tactic. Essentially, the blitz attack is an offensive attack in which we are sending all our water at once onto the seat of the fire. Just like in football, a defense will blitz the quarterback by sending the linebackers, the cornerbacks, and defensive backs in an all-out assault to sack the quarterback.

The Blitz Attack: Just Blast It!

Drill of the Week: Blitz Attack

The blitz attack is a combination of both exterior water application and an interior offensive attack. It is transitional because initially there will be water delivery on a large scale to knock down the fire followed by an attack line going in to complete the rest of the job.

The blitz attack involves using either the deck gun mounted on top of the engine, a 2 ½-inch handline or a ground monitor specifically designed for a blitz type of setup and delivery (photo 1). In this photo, this specific device has been designed to be grabbed by one firefighter and set up easily for quick water deployment. Many departments will look at these listed pieces of equipment as defensive weapons only and not as an offensive option, yet they can also be used offensively.

The blitz attack is a great tactic that can be employed by a minimally staffed department or lone arriving fire truck. It is designed for both a single truck and multi-truck application. In the corresponding videos, “Beaver Dam Fire” and “Delavan Wisconsin Fire,” you will see how a single truck arriving on scene can be used in an offensive mode to accomplish fire knockdown with minimal staffing. You will also see a multi-truck response doing the same thing but with a handline being pulled off for the interior attack.

So when can we use this? This tactic is great for fires that are of significant size and development in residential garages, exterior balconies, front walkways or wrap arounds, commercial fires, strip mall fires, small low-rise apartment balconies, motels, and so on. The fire will be at an advanced stage, requiring large amounts of water to overcome the heat release rate (HRR), and such quantities of water can only be delivered by large appliances and hoselines.

For this tactic to work effectively, the first-arriving truck needs to have a clear shot of the front of the building or to the portion where there is advanced fire. Obstructions such as trees, parked vehicles, or other such things will only prevent the water streams from being effective.  As shown in photo 2, there are no obstructions preventing water streams from reaching the garage or front of the house if there was fire present in the garage or coming out the front door. Remember, this technique is designed for fires of a large and advanced stage – not for fires that are room and contents or contained to one small portion of the house or not self-venting from the structure.

When considering the blitz attack, keep in mind the reach and amount of water needed to be effective. For longer reach and larger amounts of water delivery, rather than using an automatic combination nozzle, smooth bore tips are going to be the answer. Knowing your response area with how far the setbacks are from the street to the front of the properties will dictate what type of nozzle you will need: smooth bore or automatic combination nozzle.

Imagine a worst-case scenario: a single truck arriving on scene first with second and third units arriving a short time later. The officer will instruct the driver and crew that this will be a blitz attack and will communicate this across the radio as part of their initial scene size-up and report. Next, the driver must position the truck for a blitz operation by parking in direct line of sight of the fire, if using the deck gun option. This will allow for great access to the area in question.

One crew member will exit the truck and head to the top to ready and man the deck gun. Once readied, the pump operator/driver will then discharge water to the deck gun. The crew member will operate the deck gun, sweeping it back and forth, up and down to hit the seat of the fire and knock it down. If using an option like in photo 1, the one firefighter will grab the ground monitor, advance it to be in a position where they can sweep the entire area of the involved fire, set it up on the ground, call for water, then knock down the fire.

Meanwhile, another crew member is sent to secure the water supply by hitting the hydrant, if one is available, so that continuous water delivery can be maintained by the deck gun until the initial attack line is pulled off and readied. The officer will be doing a complete 360° walk-around to make sure that they are still in an offensive strategy. Once water supply has been secured, the hydrant firefighter can then grab the preconnect handline, get it stretched out, charge it with water, and then make entry along with the officer to conduct interior operations.

If there are no hydrants available and rural water operations are needed, then the one firefighter will set up the portable water tank for the tanker operation instead of the hydrant operation.

This tactic will only work well for a fire department that has practiced it over and over again and have exceptional knowledge of their own water supply duration from their booster tank and obtaining a water source. There are many variations of this type of tactic. Play around with the blitz attack on the training ground to determine which variation will work for you.

The SCBA Tug: Ensure You Are Connected