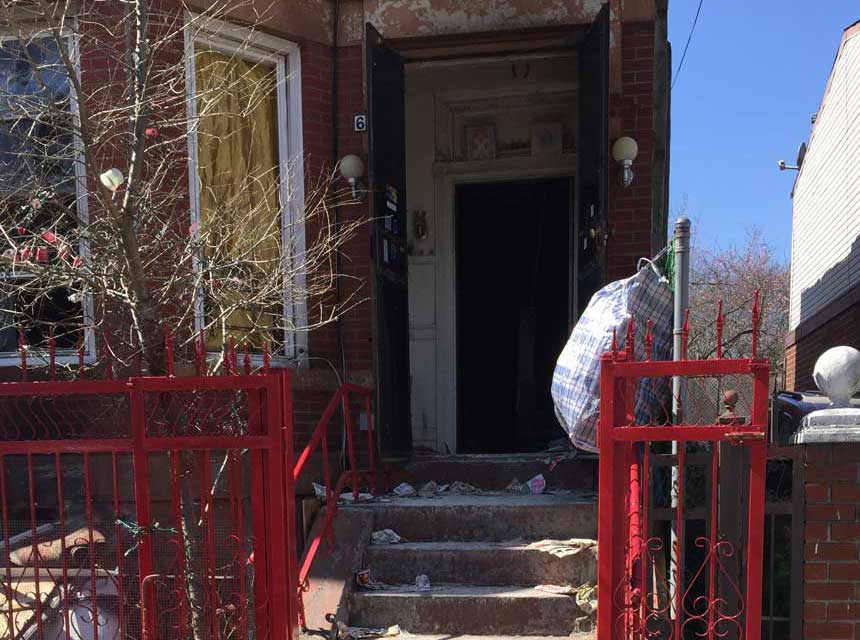 If you’ve ever listened to an “All Hands” on the Fire Department of New York (FDNY) radio, you may have heard this transmission and wonder what it means.

“Battalion 99, at Box 9999 we are using All Hands, we have one line stretched and operating. A second line is being stretched, searches are underway, and trucks are opening up. Fire is doubtful.”

Trucks are opening up?  What exactly is he saying?

He is referring to overhaul. There are two types of overhaul:

“Trucks are opening up” means that both truck companies are performing precontrol overhaul while the fire is still active; they are searching for extension. Our primary mission at a fire besides the obvious, life safety, is to locate the fire. Locating the fire doesn’t stop when we find the initial fire area, but continues throughout the operation.

Opening Up Walls Can Cause Less Damage Than You Think

The Proper Use of an Ax in ”Opening Up”

After the fire is located, the company that found the fire will communicate to engine company members the exact location of the fire. They will give them, if possible, the best access to the fire area. If there is any furniture or clutter in the path, they will remove the clutter to make access easier. At a recent basement fire in a three-story brownstone type private dwelling, the units encountered medium clutter behind the basement entrance door (photo 1). The engine instead of being able to stretch directly into the basement needed to use the second-floor entrance and head down the stairs (photo 2, 3).

Due to the delay in getting water on the fire and the open basement ceiling, the fire was spreading rapidly. The second-due truck working on the floor above needed to “open up” the baseboards and walls to determine the extent of the fire. As a side note, I still feel the best way to search for extension is to do it the way we did it when I came into the department: feel the wall for heat and, if it is hot, open up.

I brought the thermal imaging camera (TIC) with me on the floor above, but I’ll admit that I am far from an expert with it. I think the problem for me is that it didn’t exist until I had about 10 years in the department and never used it. The first time I used it was while covering in a rescue company, and back then the units were the size of a small TV. We were at a fire in a mixed occupancy, with a store on the first floor and dwellings above. I remember the chief thinking that the TIC was some sort of magic wand that was going to tell us exactly where the fire was. The fire was burning in the sleepers that were in bedded in the concrete floor, which needed to be torn up to expose the fire.

I quickly put the camera to the side and assessed the situation. The first thing I did was check with the firefighters operating in the fire area to find out exactly where the fire was. It makes no sense to start opening up in the rear bedroom if the fire is in the living room. We were able to determine that the main body of fire was under the living room (photo 3).

I knew from my experience working in the area that these buildings were single-family private dwellings. Over the course of 120 years, many renovations have taken place.

There was a high heat and heavy smoke on the floor above because of the open basement door (photo 6), but that wasn’t the only reason for the conditions. When I came in the front door I instinctively put my hand on the wall coming into the living room and it was red hot, with smoke pushing under pressure from the baseboards. In my experience, when you have both of these conditions, there is extension in the wall.

Firefighters need to know the boundaries of the building, that is whether they are operating in a single building or one that is part of a row. Brownstone buildings (Type III), even in a row (photo 7), are considered one-building fires. This is compared to row frame structures (Type V), which share a common cockloft with up to 15 buildings (photo 8). Being a single dwelling, the outside walls are brick (photo 9) but the interior non-bearing walls are not. These need to be opened up and checked for extension. If the fire has not gotten into the walls, then the ceilings probably don’t need to be pulled.

A fellow chief told me about a fire where he asked the firefighters to check for extension on the floor above. The officer got back to him a bit later and told him that there was no extension. He later found out that they never checked the baseboards but pulled the ceilings. Conversely, we need to pull the ceilings in the fire area until we find clean wood.

HOW TO AVOID REKINDLES

I was assigned to a ladder company when I came on the department. My captain was an old-timer who was very thorough. After the fire was knocked down, when he ordered me to “open up” he meant for you to pull all the ceilings and walls and trim the windows. He didn’t want any chance of a rekindle. That was the biggest concern for the old-timers—it reflected badly on the company if they were called back for a rekindle.

I may have been guilty one time that I can remember. There was a top-floor fire in an extremely cluttered brownstone. After the fire was out, I released the companies and gave an “under control.” Later that night I heard a second alarm come over the department radio. My heart sank when I found out that it was the same building that we had the previous All Hands. I’ll never know for sure, but I screwed up and it taught me a hard lesson: be thorough.

Being thorough isn’t only about our ego, it’s very much about our safety as well. If units are operating above the fire or even two floors above, like in a balloon-frame private dwelling, fire can break out and trap firefighters.

Francis Brannigan,  in his book. “Building Construction for the Fire Service” states:

“It is imperative to note that collapse is not the only hazard facing the firefighter in the structure. Concealed fire which bursts out of a hidden void and lightning-spread of fire over combustible surfaces are equally hazardous and may well account for as many firefighter casualties as collapse.”

It is imperative to understand building construction. At a recent fire in a two-story private dwelling, I knew that the building was Type I Construction. I intuitively knew that we would not have any extension, even though they are attached and there is a peaked roof (photo 10). At least that was one problem I wasn’t going to have to deal with. My second-due truck checked both the B and D exposures just to make sure we didn’t have any high carbon monoxide (CO) readings.

CO is something that I may have overlooked at times. I remember a fire we had about 25 years ago. The fire was in the “A Wing” on the top floor in a six-story H-type building (photo 11), that is, thefirst wing counting from the B side. The chief ordered us to check the “B Wing”. We encountered a moderate smoke condition and found two elderly people had succumbed to CO. We didn’t have CO meters back then, but I am sure the apartment was loaded with CO.

At a more recent basement fire in a five-story multiple dwelling, we encountered high CO levels in the building. After the fire was knocked down, the deputy chief asked me why there was still smoke over the top of the building. I told him I would check it out. My CO meter pegged out on the top floor where I found a woman and two children in the apartment. It turned out that the old dumbwaiter bulkhead was covered over with plywood and tarpaper (photo 12) and the old dumbwaiter in the apartment was hidden with drywall. The shaft door in the basement, which by code should have been sealed, was wide open, causing the smoke to travel up the shaft and seep back down to the top floor.

When it comes to overhaul and checking for extension, err on the side of caution. Don’t rely solely on the TIC. It may point you in the right direction, but will not be useful in determining where the fire is travelling. Insulation will hide heat (photo 13), so the only true way to know is to open up. I still regret a time when we were overhauling a bathroom. I was lazy. I checked the walls and the tiles were hot. Instead of opening up like I should have, I told myself that the walls were hot because the tile retained the heat. I was wrong. By the time we got back to quarters, the call came in again for same house, fire in the bathroom. Another hard lesson learned.

DANIEL P. SHERIDAN is a 33-year veteran of the Fire Department of New York, where he is a battalion chief. He has worked in Harlem and the Bronx for most of his career. He is a national instructor and the founder and chief operating officer of Mutual Aid Training Group.