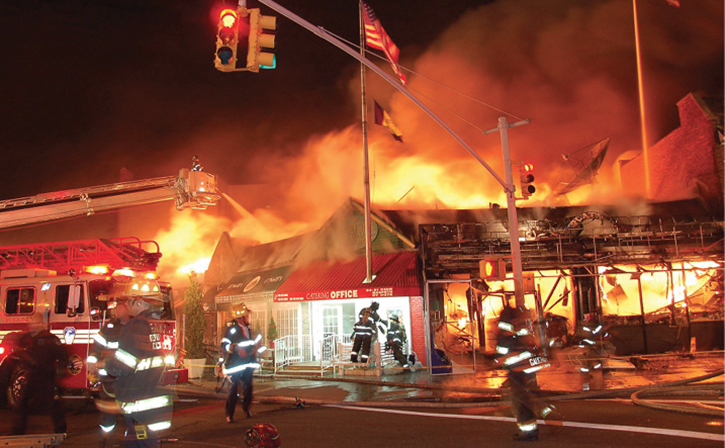 In firefighting, as in life, any activity that starts out well is most likely to end well. The observations and decisions we make when we initially arrive at a fire will set the tone for the success and safety of an operation. First-due thoughts, perspectives, and gut reactions are vital. When bad things happen, they often happen in the early stages of an incident and are usually the result of several converging factors.

The Command Bubble: A Tool for the Fireground and For Life

This is especially true for fires in commercial buildings. Although most of our structural fires occur in residential occupancies, statistics have consistently shown that the chances of a firefighter dying at a commercial building are up to four times greater. This number should be imbedded into the minds of all firefighters as they respond to an alarm for a fire in a strip mall. In light of this, as they arrive at the scene, they should have a number of initial considerations on their “mental checklist.”

The very first decision you must make is whether it is advisable to fight the fire at all. Depending on the extent of the fire, the life hazard, and the resources available, it may be necessary to temporarily ignore the store fire and concentrate on protecting the exposed buildings. The most difficult situations often occur at night or during the early morning hours, where the fire has had a lot of time to develop. So, a quick 360° survey is vital. For example, units arriving at an advanced fire burning through the roof (photo 1) at 2 a.m. might be tempted to position the initial hoseline at the front door of the store. However, a quick look at the proximity of the C exposure (photo 2) reveals the true life hazard: an occupied, wood-frame dwelling that may require the protection of that first hoseline. 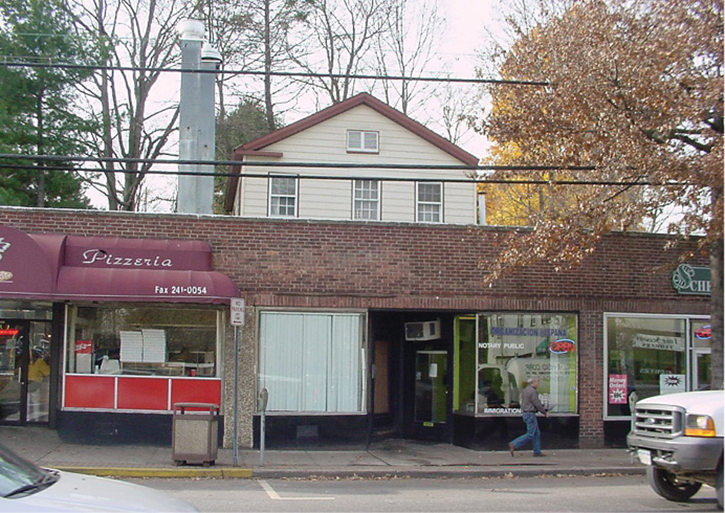 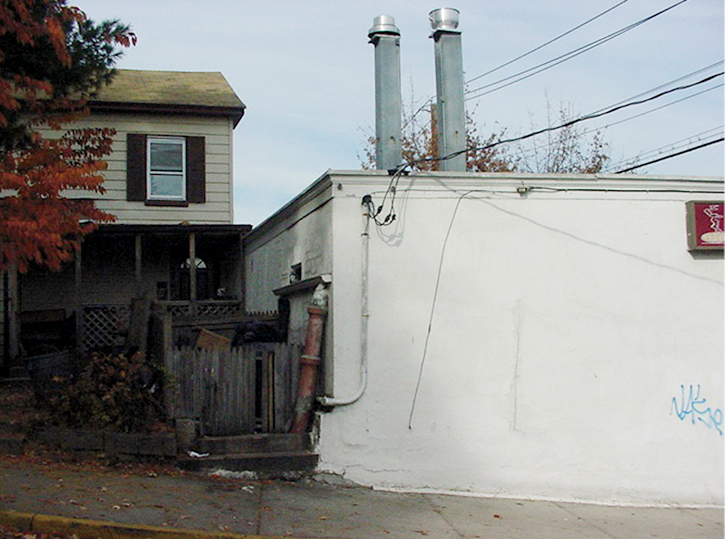 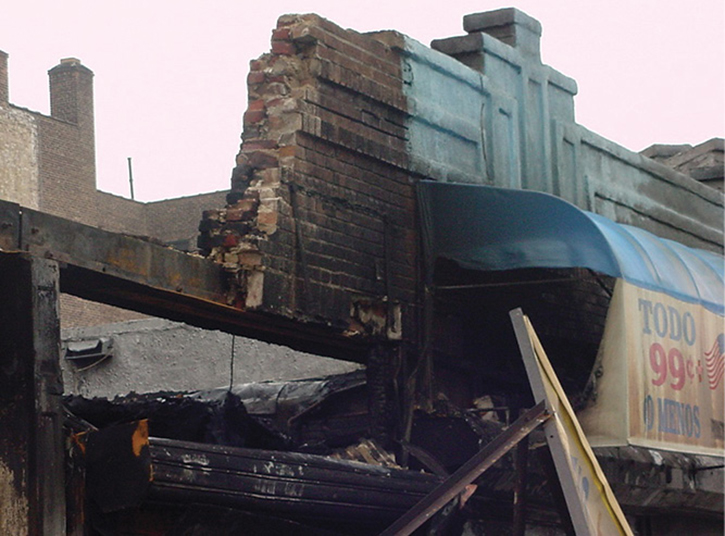 Initial decisions like these are not easy, particularly for firefighters or company officers who are not experienced or comfortable with an incident commander’s strategic perspective. It is a challenge to change or stop a strategy that is already in place. However, early corrections and adjustments will affect the safety of your personnel later in the operation.

When approaching the building, you must answer two structural questions as quickly as possible. First, what is holding up the roof? Are there substantial, solid wood roof joists that will allow us some time to operate, or is there a possibility of a fragile truss system? Second, is there a cellar beneath the structure?

Regardless of the location of the visible fire, if you are not familiar with the construction details, assume that the fire has originated in a cellar and has already entered the cockloft. You can safely narrow down and plan your attack as you probe the building and determine the construction features and extent of fire spread. If you suspect that there may be fire in a cellar, take a moment to check for the presence of a siamese connection for a sprinkler system. This is often overlooked because we generally think in terms of stretching and operating hoselines to extinguish the fire. However, a properly supplied sprinkler system will contain a cellar fire and create a safer operation for firefighters.

Your initial view of the building should also include a quick check of weakened structural elements that can collapse on operating personnel. The parapet presents an especially serious threat (photo 3). Depending on the smoke conditions, a close look may reveal cracks or other flaws that will only get worse as you continue to operate (photos 4, 5). 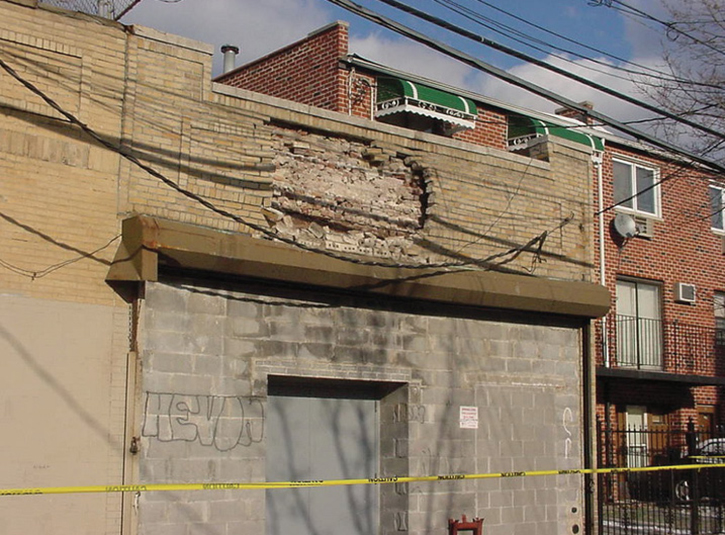 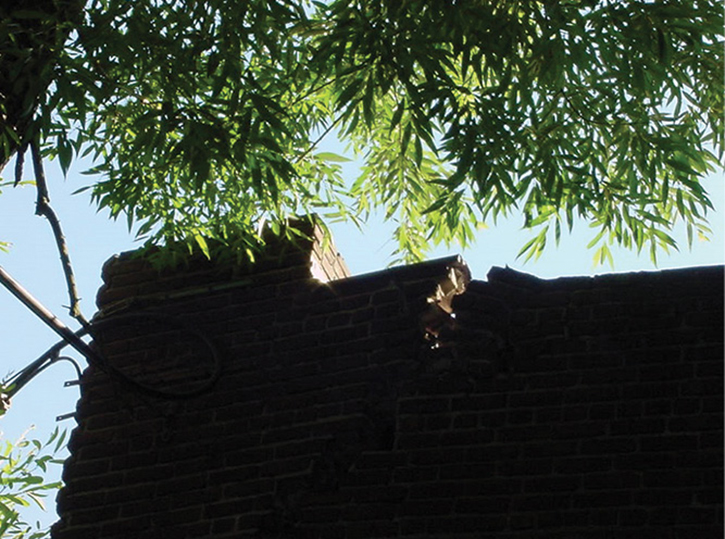 Store signs may provide valuable information in establishing strategy. Laundromats may have extended hours and could indicate the presence of a life hazard during nighttime hours. In addition, their thick concrete floors are designed to support heavy washers and dryers and present a severe collapse hazard if there is a cellar below. Signs will also provide an early warning of the presence of hazardous or volatile materials in occupancies such as drug or hardware stores. Having the presence of mind to ignore the visible fire for just a few seconds to check the store signs will provide you with vital information that may affect the nature and duration of your fire attack.

Once the initial size-up has established that there are no exposure or construction issues, a direct attack is the surest way to confine the fire and preserve as much of the building as possible. However, it is advisable to define the limits of fire extension prior to positioning the first hoseline. Again, until proven otherwise, your safest assumption is that fire has already entered the cockloft and spread horizontally to adjoining stores.

If there are several stores in the strip mall, force entry into as many as needed to determine the best hoseline locations. Very often, we use the first hoseline to attack the main body of fire. On occasion, your mind must also be open to the possibility of skipping an occupancy that is already burning and positioning a line in an adjoining, uninvolved store to confine the fire and protect the rest of the structure. Staffing and water resources will dictate how aggressive your strategy can be, particularly for smaller fire departments.

A check of the roof’s construction may reveal the presence of fire walls within the strip mall (photo 6). Substantial fire walls can significantly limit the extent of fire spread. Rather than formulating a fire strategy for a 200- × 100-foot building, you may actually be dealing with only a 25- × 100-foot section of the structure. Again, this is significant information that will guide your overall strategy, so obtain it early in the operation. 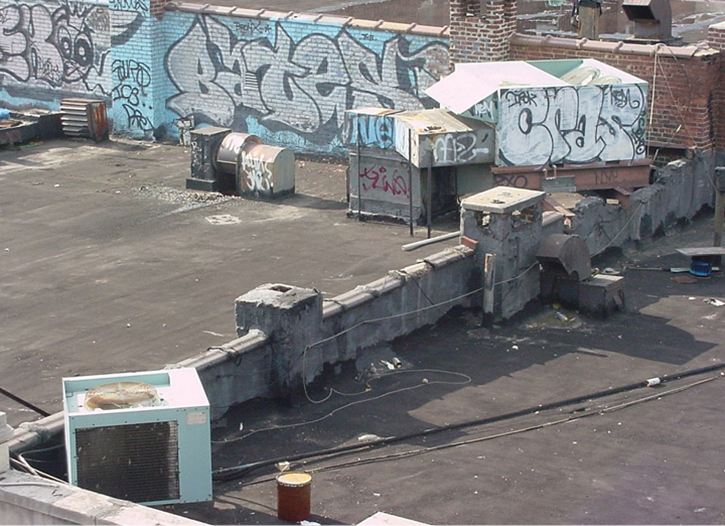 If the overall size-up indicates that an interior attack is safe and feasible, you must address one additional safety measure: Prior to advancing into a store, open the ceiling near the entrance door to reveal any fire that may be hidden above. In some buildings, this may be as simple as lifting an acoustical ceiling tile to view the cockloft area. However, renovations in older strip malls will often leave two or more ceilings in place. In this situation, removing the lowest tile will reveal only the space between the old and new ceilings rather than give a true picture of fire conditions in the cockloft (photo 7). The original tin ceilings found in some older structures will require additional work, staffing, and time to properly open and examine. 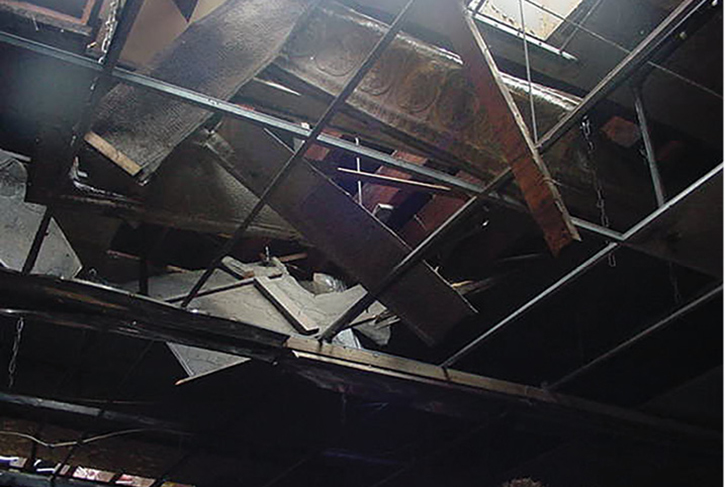 Finally, even if you have decided to commit to an interior fire attack, think proactively about the possible need for a “Plan B.” An exterior operation may eventually be required to extinguish many strip mall fires (photos 8, 9). Fire conditions can change rapidly, overwhelm handlines, and require a rapid change in strategy. As you position initial attack lines, consider what resources may be available for such a transition. Decide where to position tower ladders or other heavy caliber appliances if they are needed to confine the fire and determine if you have a water source capable of supplying them. These few seconds of preplanning can provide a second line of defense if your initial strategy becomes unworkable. 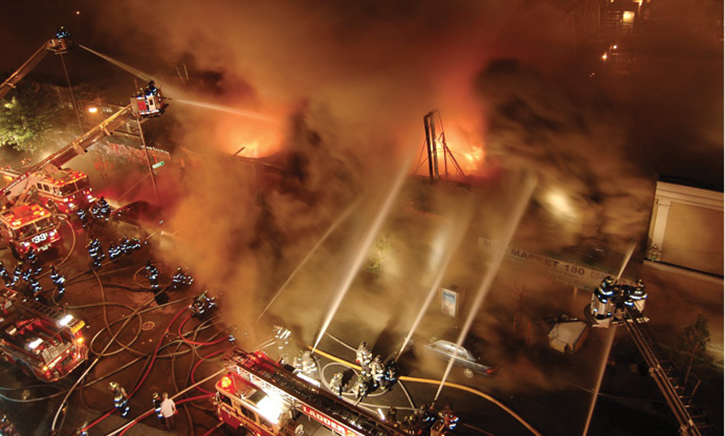 Firefighters have a lot to deal with on arrival at any fire. Adrenaline, stress, inexperience, and a myopic perspective can all inhibit your ability to perform an effective size-up. The challenges and the risks are often magnified at a fire in a commercial building. Although there are numerous safety issues to address at any strip mall fire, a few basic first-due thoughts will go a long way in establishing a safe and successful operation.

THOMAS DUNNE is a deputy chief (ret.) and 33-year veteran of the Fire Department of New York. He has extensive experience working in Midtown Manhattan and the Bronx and has been the incident commander at hundreds of fires in residential, commercial, and high-rise buildings. Dunne has also written numerous articles for Fire Engineering and lectures on a variety of fire service topics through his “Third Alarm Fire Training” seminars. His FDNY memoir, Notes from the Fireground, will be published this spring.