Scenario: Your engine is dispatched to a motor vehicle crash involving a tractor trailer and a passenger car. The saddle tank on the tractor trailer is split, and 75 gallons of diesel fuel have spilled onto the roadway. The roadway is adjacent to a small stream, which leads to a pond a quarter-mile away. As you view the stream, you can see a sheen trail extending downstream, and when you look at the pond, there is a 10- × 10-foot area that has rainbow sheen. The pond is home to some ducks and has been added to the list of environmentally sensitive areas in your community. 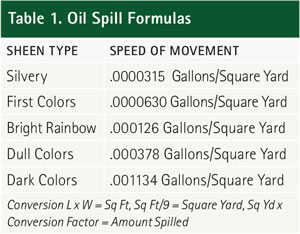 Fuel spills are a common occurrence for emergency responders and often occur in vehicle crashes. It is not unusual for these incidents to involve waterways such as harbors, bays, streams, creeks, and ponds. The ability to determine how much fuel has entered the waterway, where it will travel to, and the options for action will be critical in developing and implementing effective strategies for responding to the spill. 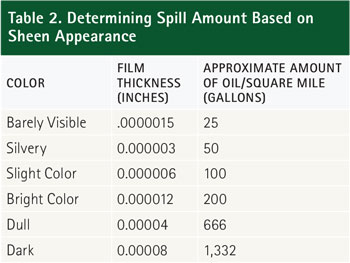 In the water, fuels and oils tend to spread out and form a thin layer. As a result, the spill spreads over a wide area but is relatively shallow in depth. Responders usually see spills as sheen on the water, but they may also see slicks, which are areas of thicker oil that appear darker than the surrounding water; pancakes, which are circular blobs; or windrows, which are streaks of oil that line up with the wind. Because fuels and oils spread so well on the surface of the water, a small spill may appear to impact a large area. For example, a spill area with a silvery sheen contains approximately 0.0000315 gallons per square yard.

Scenario: You see a bright rainbow sheen in a pond. The sheen is approximately 35 × 50 feet.

Wind will also impact the spread of the spill; this is most often seen in open areas such as lakes and bays. Wind will push the spill along the path of the wind approximately .034 miles for each mile per hour of wind. So, for a 15-mile-per-hour (mph) wind, the spill will move at approximately 0.5 mph. Consider the following example (Figure 1):

Once the responder determines how much fuel has spilled into the water and where the fuel is going, the next step is to identify and implement response actions. For most fuel incidents involving gasoline or diesel fuel, sunlight and time will disperse most of the fuel. If passive remediation is not an option, the responder has a variety of strategies from which to select. The responder should consider the goal of actions taken-collection, protection, or cleanup; where the material is going; the availability of resources; and the ease of deployment. Each of these factors will guide response action.

Containment booms are often used for heavier fuels and oils to protect areas or to concentrate the spilled materials for collection. It is appropriate for deflection strategies, where the spill is bumped out of an area but still allowed to continue moving downstream; containment strategies, designed to concentrate the spill for further action; or exclusion, where sensitive areas are fully protected from the spill. Although containment booms are effective at containing spills, they require an investment in personnel and equipment including boom and boats. They are often used in areas where there are larger bodies of water, such as harbors and bays, and where the risk of larger spills is present. Regardless of the booming strategy being implemented, a single boom is rarely, if ever, appropriate. Place secondary booms at least four feet from the primary boom. This allows the secondary boom to stop any product that has gone over, under, or around the primary boom (Figures 2 and 3).

Building a dam is another strategy that is fairly common and can be used in responding to spills. Most fuels that responders will encounter float on water, requiring that either a full dam, intended to collect all water and the spill, or an underflow dam, where water is able to pass through the dam, be deployed. Both of these strategies require time to develop and personnel. The building of dams is very effective for spills in small streams and can be implemented easily with personnel and equipment from an engine company and the use of small pipes (photo 1).

Another technique that can be built on site and which combines restricting the flow of material downstream with collection is the development of a fence or ladder boom. This technique requires that responders build a series of steps using earth and wood by placing vertical braces into the stream bed and then placing wooden slats at the waterline or fence across the stream. The wooden slats collect material as the material is moving downstream. Absorbent pads or other materials such as straw, sawdust, and vermiculite can then be deployed to absorb the fuel.

Absorbent booms and pads have become common and are frequently used to absorb fuels in the water. They are designed to be quickly deployed and are lightweight, are relatively inexpensive, and do not absorb water. Once these materials are deployed and contaminated, they are collected and disposed of as hazardous waste.

Other strategies such as skimming and vacuuming fuels are used less commonly, especially for small spills. These systems remove the fuel or oil directly from the water by passing the contaminated water through systems designed to remove oily water and oil from the water. The use of these systems is expensive, and a large amount of contaminated waste is created. Manual removal is used for heavy oils that contaminate the environment. This process involves removing the contaminants from the environment and includes removing contaminated plants and soil.

Dispersants and other strategies such as burning are rarely used for fuel spills. Dispersants are sprayed on the material to thin and spread out the spill. This allows bioremediation to occur at a faster rate. You cannot deploy dispersants without first receiving permission from the regulatory agencies that have oversight for cleanup. 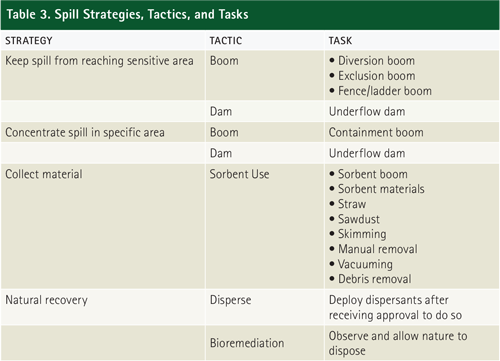 When selecting a strategy, the responder should also consider the cost, time, and impact of the cleanup. Small spills of light hydrocarbons-such as gasoline-in the water will likely remediate in a short time with exposure to sunlight and the environment. By comparison, using absorbent materials may result in only a small fraction of the material being collected. Small spills often do not require aggressive cleanup, especially during the warmer months. In addition, cleanup activities in environmentally sensitive areas may cause more damage than the actual spill and should be considered when determining which strategy to employ.

DAVE DONAHUE has 33 years of emergency services and hazardous materials experience. He is the director of emergency services in Franklin County, Pennsylvania, and is affiliated with the Cumberland County (PA) Special Hazards and Operations Team, the South Central Task Force (PA) Incident Management Team, and the Halfway (MD) Fire Company. Donahue is an instructor for the Maryland Fire and Rescue Institute, and he is a Coast Guard Chief Marine Sciences technician stationed at U.S. Coast Guard Sector-Baltimore. He has previously worked with the U.S. Capitol Police Hazardous Materials Response Team and the International Association of Fire Fighters Hazardous Materials Training Program. Donahue has also served with fire and emergency medical services organizations in West Virginia and Florida.