A fire in a single-family home in Germany is a good example of how you should use various ventilation profiles during one single incident.

At 0550 hours on January 6, 2017, in Adelberg, Germany, a large garage integrated into a single-family home caught fire. The woman living in the building was warned by neighbors and left the building before the arrival of the local fire department. Because there was no further life hazard, the fire department could concentrate on preventing further fire damage.

On arrival of the first engine, the walls, ceiling, and roof construction were already involved. Because of the various and coordinated ventilation profiles that had to be switched during the incident, the damage could have been limited. The principle of “After we arrive on scene, there should be no increase in damage” was the focus for the fire crews. At the end of the incident, there was neither any visible smoke damage or dirt, and only a very minor smell in any areas of the building that had not been directly affected at the time the first engine arrived on scene.

The main goals of fire departments worldwide are saving lives, preventing injuries, and reducing property and environmental damage. For some calls, our first-priority tactical decision is whether we initially go for rescue or for extinguishment. If there is no life hazard, we must decide how we protect objects, other structures, and areas of the building that are still worth saving. Sometimes, fire crews think that they have saved a building, but during renovation after the fire, a conclusion is made to bulldoze the building anyway.

And, there are times when fire crews think that they did a great job extinguishing a fire, but during their firefighting operations they opened doors and allowed smoke to travel in clean parts of the building, increasing the damage tremendously. For about 20 years, there has been an increasing awareness in the German Fire Service that it is not our task to extinguish a fire as soon as possible but to extinguish it in a way that the damage does not increase during our operation. Some of these principles can be shown in the following documented house fire in Adelberg.

The fire department was called at 0550 hours by a neighbor that awoke because of a strange noise. He called the fire department and alerted the woman living in her home who was sleeping in the C-D corner of the building. The first two engines from the local fire department arrived six to eight minutes later and reported a house fire that had already affected the wall, ceiling, and roof construction. After investigating the scene and realizing that there was no life hazard, fire crews could concentrate on extinguishment and saving property. The main property was the newer part of the building (on the right side of photo 1) and the personal belongings above the garage area. With a fire of that extent that had already progressed into numerous structural components as well as heavy fire load in the garage (the storage area with shelves from bottom to ceiling), this response was still a challenging task. The left part of the building was already considered a total loss. 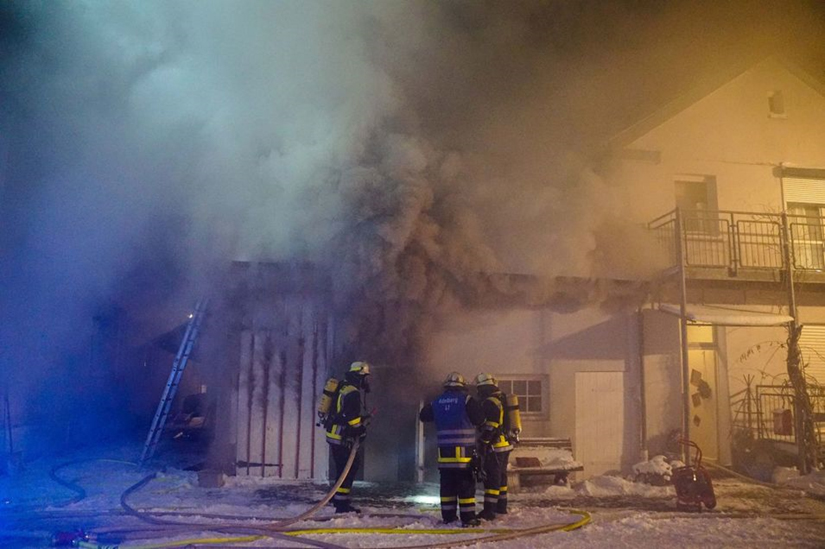 (1) The view from side A. The garage (side B) is on the left and the newer residential area is on the right. (Photos by author.) 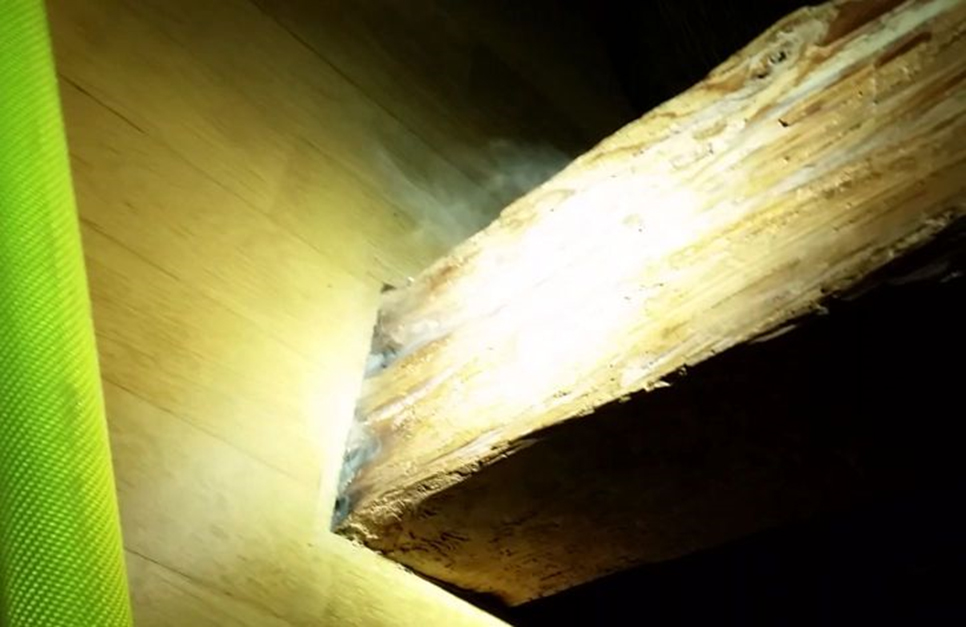 (2) The floor above the garage is already showing smoke at a wood column at the middle of the building.

From this size-up, the seat of the fire was assumed to be at the back part of the garage. Because of shelves—which reached from the floor to ceiling—and a heavy fire load in the garage, an interior attack was not an option from the associated risk and the potential savings. Crews performed an exterior transitional attack through a partially opened door to the garage, but it was not possible to reach the seat of the fire from an outside position.

Knowing that opening up the roof might result in a short-term lift of the neutral plane, while the inflow of fresh air can accelerate the fire, officers decided to open the roof above the fire with a small opening of only about 0.5 m2 (photo3). This action led to the image of dark grey smoke leaving the building. Looking from the front side of the building, less smoke was seen leaving the building through the only partially open garage door. This also meant that more fresh air would be sucked into the building through this door, even though this is not directly visible. 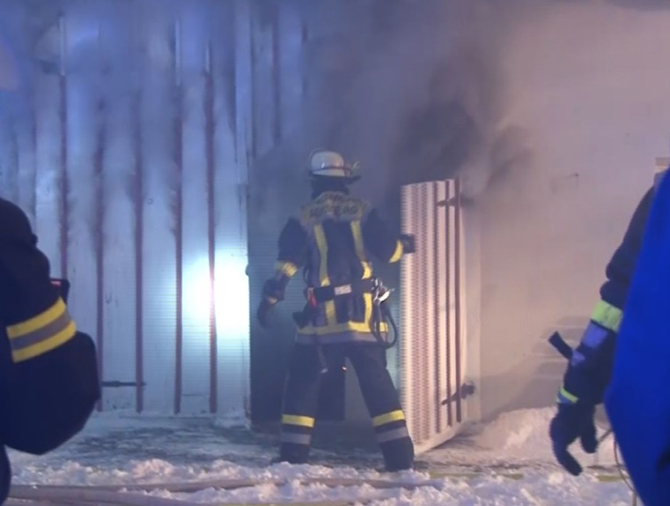 (4) The door to garage was closed to block the flow path to the fire. 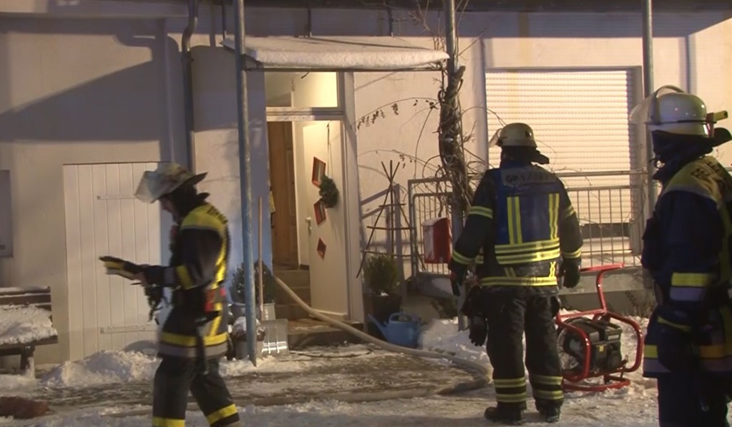 (5) Placing a portable fan at the front entrance door limited smoke spread in the building.

This nonventilation profile of the fire area, in conjunction with a lower pressure and a higher pressure in the “worthy-of-being-protected living area on the right side of the building” led to a small but stable flow from the “white” areas of the building to the “black” areas.

Regarding this operation’s functions, it was documented in the living area above the garage that smoke was sucked out of the small hole at the B-C corner of the building (photos 6, 7). This effect was also visible in the middle of the building; smoke could be seen pouring out of the cracks in the ceiling.

(6, 7) The living area above the garage (view from the B-C corner) before and after the coordinated ventilation profiles (nonventilation and positive pressure ventilation was applied to different parts of the building simultaneously).

After the fire was weakened by crews dousing water on it from the roof and through the controlled garage door, the garage door was opened. Knowing that this might accelerate the fire and ignite the smoke, officers had a hoseline at the ready. Photo 7 shows the situation just a few seconds after the front door was opened, when the smoke actually ignited. 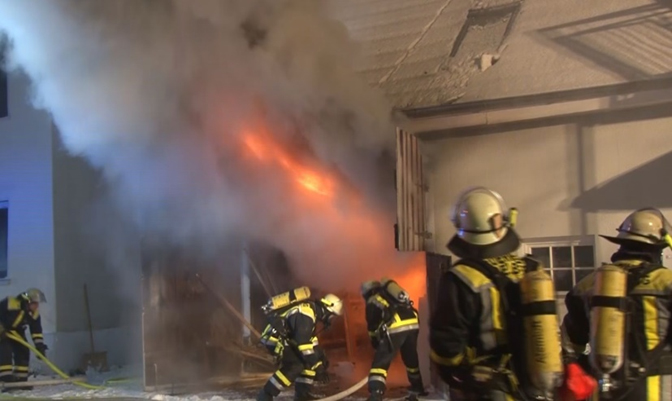 (8) Opening up the garage door resulted in immediate ignition of smoke.