The fire was now was being fought through the garage door using a fog patter to reduce the heat release in the smoke and flame area as well as with a straight stream to reach the seat of the fire at the rear of the garage. 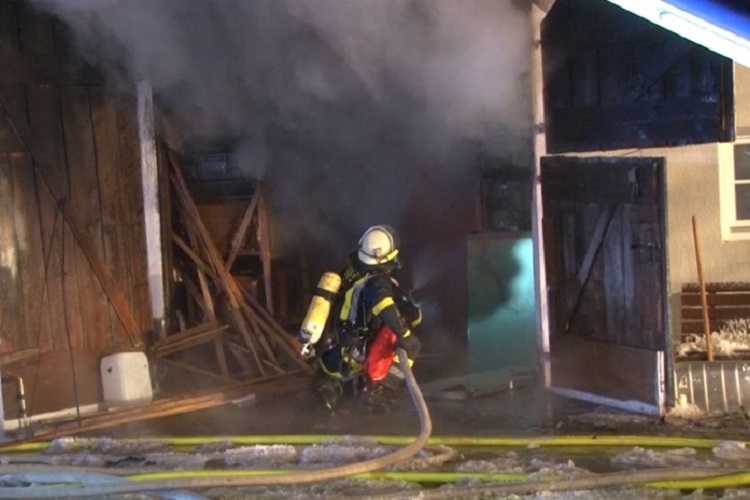 (1) A straight stream was used to reach the seat of the fire at the rear of the garage. (Photos courtesy of author.)

To truly judge the work of the fire crews, get a feedback from the renovation teams and insurance companies. They (together with the homeowner) have to deal with the remainder of the fire department’s actions on scene.

Photos 2-4 show the investigation of the structural components to judge the necessary actions for renovation. 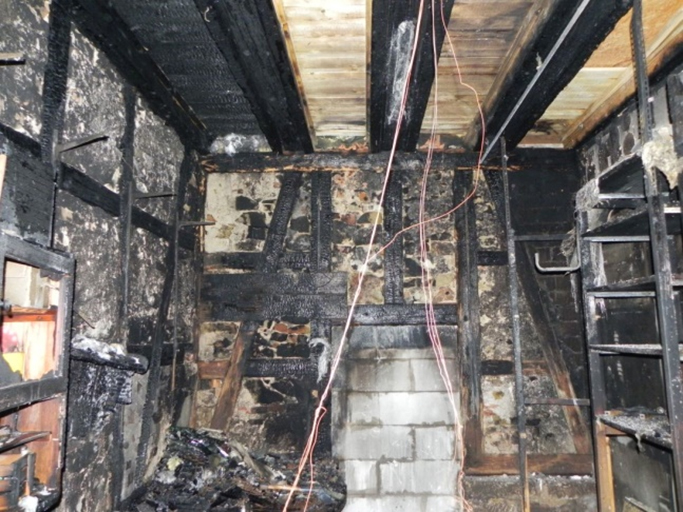 (4) The rear of the garage with burned up and charring marks at the structural wood.

Although the structural wood was only partially affected, this part of the building was taken down during the renovation process (photos 5 and 6). This finally proves that the fire department was correct in not taking more of a risk for something that was already totally damaged.

According to the principle, it is not the amount of fires we go to; it is what we learned from each of them by allowing critical talks and judgement. Also, consider the question, “What would we have done differently if we had all the information during the firefighting process that we had after the response?” Following are a few lessons learned:

Stay open-minded and critical to what we have done and experienced on the fireground. To improve our actions, do not go home from a fire and just be happy with the idea that we did a great job simply because we took a high risk to save some property. Our “savings” might be torn down during the renovation process. In hindsight, these may have been unnecessary, irresponsible risks. As a fire service, we know that we must risk a lot to save a lot, but we should not take risks for something that will be bulldozed after the fire.

Ventilation must be well planned, communicated, highly coordinated, and controlled. You may also have to change the ventilation profile in a flexible manner during the incident to receive the best outcome. Nearly every firefighter on scene has influence on flow paths by creating openings. Without the knowledge of the overall ventilation profile, you might open doors and leave them open to access the desired area or you may open windows to release smoke to improve working conditions. Everyone working in and outside the building should therefore know about the incident commander’s (IC’s) desired ventilation profile. In some cases, we even need people who are responsible for controlling that ventilation profile in specific areas of the building. Otherwise, a fire scene’s actions are too fast-moving for an IC to control the entire incident on his own.

Priorities also may change quickly on the fireground. Are we in “rescue mode” or are we in “property-saving mode”? What is the risk we take for our firefighters in relation to the gain we can achieve? Regarding health issues for interior crews, always avoid unnecessary exposure to smoke, chemicals, and even contact to soot and dirt. Hygiene activities must to be ensured to limit the time of exposure.

In this house fire, there was no need to make a fast and aggressive interior attack that exposes our members to smoke. And, a faster extinguishment could not have saved any property. Even if the fire burned 10 minutes longer (in a throttled burning regime), because of planned and coordinated actions, smoke spread in the building was avoided.

It is important to remove the homeowner’s valuable personal belongings such as documents, photos, or computers. However, taking a risk to “save” something that will be thrown away or torn down is not be an option, even if we are expected to do so. The fire service should decide what to do on the fireground based on its judgement of what is worth rescuing in relation to the risk to do so; it should never be driven by the public’s expectations.

In this house fire, the part of the building that was not affected by the fire was kept totally clean (a 100-percent “white area”) and was therefore saved. The owner was told a few hours after the fire that she would be able to go back into her building and could sleep in her apartment the following night. At every hazmat scene, we divide between contaminated and clean areas; everyone that leaves the contaminated area must be decontaminated. In building fires, we do not apply the same principle; we divide a building on fire into “black” and “white” areas. It is vital for the IC to have every firefighter include this decision in every action he makes on scene.

Structural components that have been affected by fire will probably be taken down during the renovation process. Only if the building shows minor signs of surface charring should they possibly remain in place after renovation.

Fighting a fire in a building is difficult. If you want to do it, be professional. Even without life hazards and without any rescue operations, the professional’s fire fight in a building is complex. If it is a small fire in a limited area (i.e., a “single burning item” fire or a “limited room-and-contents fire”), the fire service should concentrate on damage reduction because of smoke spread (tactics and coordinated ventilation). If it is a developed fire in a compartment, the ventilation profile has an influence on the burning regime (e.g., the air track can accelerate or “snuff out” the fire) and additional air supply to the fire can trigger a ventilation-induced flashover. If a room-and-contents fire has already accessed the interior structural components, the fire service needs good craftmanship skills to access the fire and, maybe, the right tools to extinguish it without providing it additional air such as the use of fog nails.

The fire service needs multiple skills to act professional. Regarding successful extinguishment operations, the fire service needs tactical knowledge combined with a deep understanding of fire dynamics and ventilation, a working command system, skills to advance a hose and operate a nozzle, skills to extinguish a fire within a compartment, and the right tools to work on different types of fires (nozzles, smoke blocking device, fog nails, fans, and so on). Also, fighting a fire in a structure also requires handworker skills to understand different types of building constructions and how to safely and effectively operate with the necessary tools to do that job.

Below is a video of this fire: