Top-floor fires are cause for great concern for any incident commander (IC). What sets the top-floor fire apart from a fire on any other level in the building is the common cockloft—the space between the top-floor ceiling and the underside of the roof (photo 1). In a building of Type 3 Mixed Construction, the common cockloft generally will be open and not fire stopped, covering the whole top floor. That area may be anywhere from 2,500 to 3,000 square feet; bigger buildings may have dividing fire walls that extend to the top-floor ceiling, the underside of the roof boards, or the top of the roof boards, depending on the year it was built. 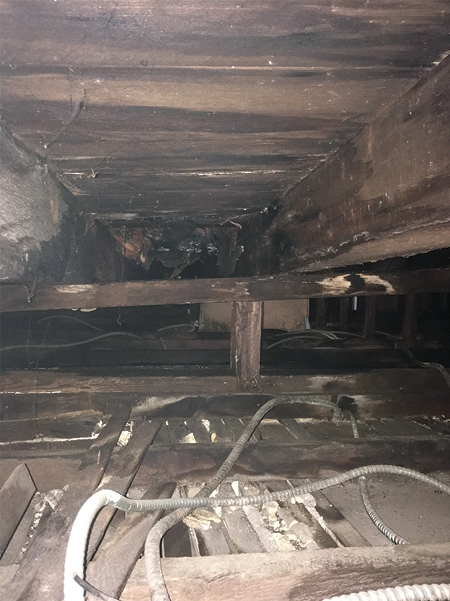 (1) The cockloft—the space between the roof and the top-floor ceiling. (Photos by author unless otherwise noted.)

This past winter was a busy one in my response area of the Fire Department of New York (FDNY). We’ve had quite a few top-floor fires in the past few months; I have been at most of them. The primary task at every incident is to locate the fire. We are finding that fires are developing in these void spaces and going unchecked for a while before residents are notifying us (photo 2). The BX cable that is running through the void spaces is amidst very thick blown-in insulation and may be contributing to this recent rash of top-floor fires. FDNY is investigating the effects of the insulation getting wet and how that is compromising the BX cables. 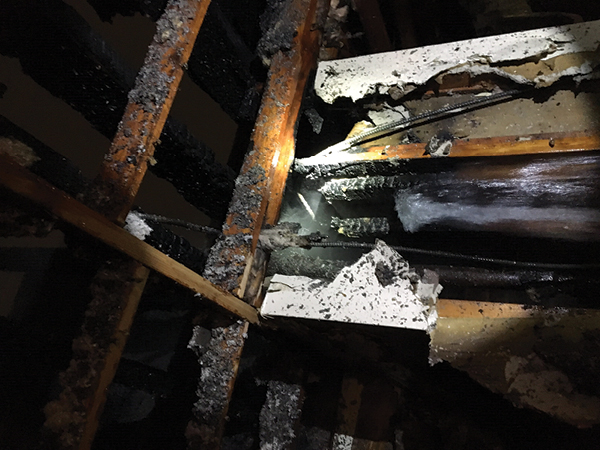 (2) The BX cable running through the cockloft.

Companies responding for any odor of smoke need to do due diligence and find the source of the smoke, especially for a report of fire on the top floor. At one of the recent fires, the residents had smelled smoke early in the evening. Instead of calling the fire department, one resident called the maintenance personnel of the building. The maintenance worker investigated and told the tenant that there was no problem. By the time the fire department was called, the fire had already made headway in the cockloft.

Using the thermal imaging camera is not enough; the insulation in the cockloft or wall will hide the heat (photos 3 and 4). Search and rescue teams (or whoever is responsible for locating the fire) need to check for heat the old-fashioned way, by feeling the walls and opening up the ceiling. You will know when you arrive at the top floor by the odor of smoke, whether you are looking for a concealed fire or just a rubbish or stove fire. If there is any hint of an electrical smell or any type of wood smell, you need to let the IC know and call for a hoseline. 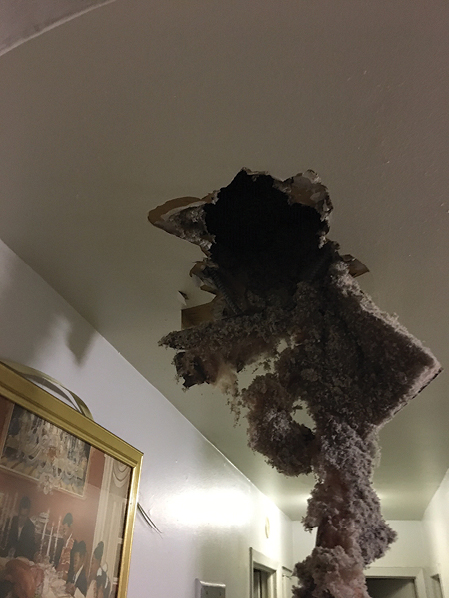 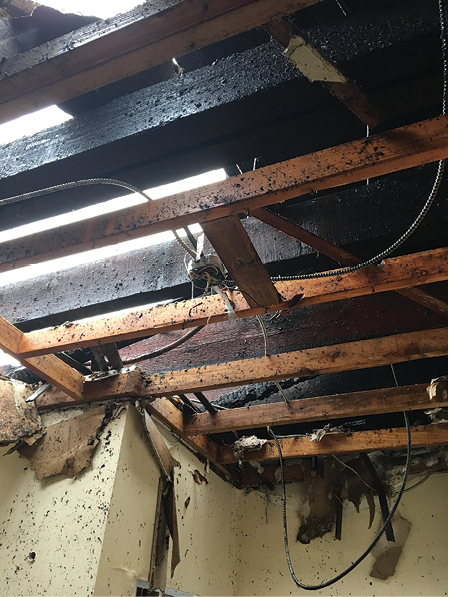 (3, 4) Blown-in insulation will conceal fire in the cockloft.

Use caution when opening up; you can feed the fire, causing rapid fire growth. If you have an odor of smoke, check the ceiling above you before entering the apartment. You don’t want to get too deep into an apartment and find out that there is fire in the cockloft above you. On Sunday, October 8, 1995, my good friend Firefighter Pete McLaughlin was working in Rescue 4 at a fire on the top floor of a multiple dwelling of noncombustible construction. He was killed when the cockloft exploded down on top of him while he was searching for a report of occupants missing in the apartment (photo 5). 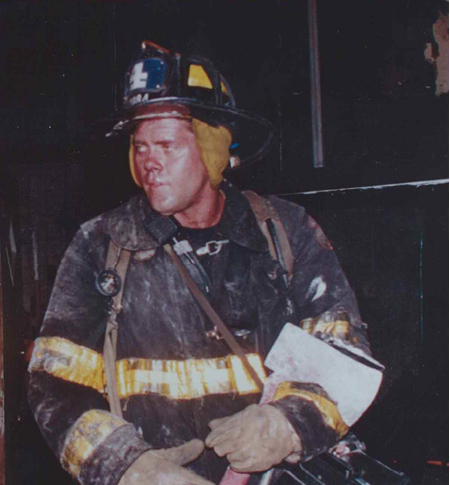 (5) Firefighter Pete McLaughlin from FDNY Rescue 4 was killed when the cockloft exploded down on top of him. (Photo courtesy of Ellen McLaughlin.)

If you discover fire in the cockloft, you need to take quick action. Get into the apartments on the top floor and open up the ceilings to determine the extent of the fire spread. Companies will need to bring six-foot hooks to accomplish this task. (It is a good practice when opening ceilings to make sure that a hoseline is in place and ready to operate. If you open up without a hoseline to extinguish the fire, the fire will intensify rapidly.)

After you locate the fire, you need to confine it. Not opening the ceilings until the hose is in place may keep the fire in check for a bit. You need to get hoselines in place and operating quickly; it is critical to get the first line stretched and in operation. Use all available engine companies to accomplish this task. After the first hoseline is stretched and in operation, units can then focus on getting the second line into operation. If the second line is needed for any extension, then stretch a third hoseline.

The FDNY has an innovative new tool in its arsenal that has been very successful in combating cockloft fires. The cockloft nozzle (photo 6) is carried by the squad and division vehicles. The nozzle can be inserted into a three-foot × three-foot hole in the ceiling and rotated to reach up to 60 feet in any direction. The nozzle is attached to a 1¾-inch hoseline and can flow 125 gallons per minute (gpm). 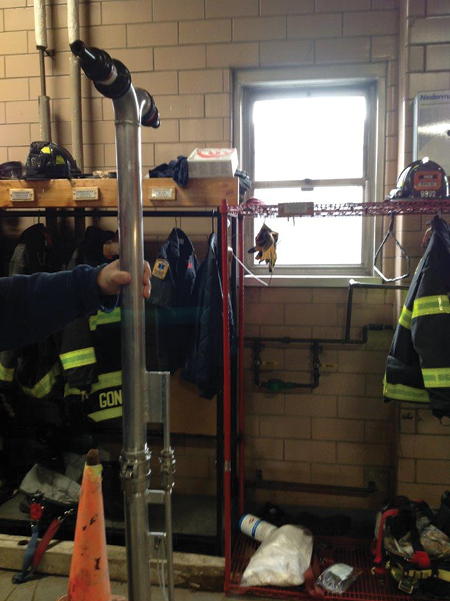 At a top-floor fire, establish two sectors immediately—a Top-Floor Sector and a Roof Sector—commanded by either a chief officer if available or a company officer. The whole top floor will need to be searched; smoke will contaminate every apartment. If there are separate wings (photo 7), check both wings. Smoke and carbon monoxide will still be present and travel through the cockloft. You cannot always rely on firewalls. A true firewall will keep fire out of the other section of the building, but be cautious. The firefighter on the roof needs to check any protrusions on the roof by opening it up with a tool. What may appear to be a firewall may only be an I-beam encased in tar paper (photo 8). 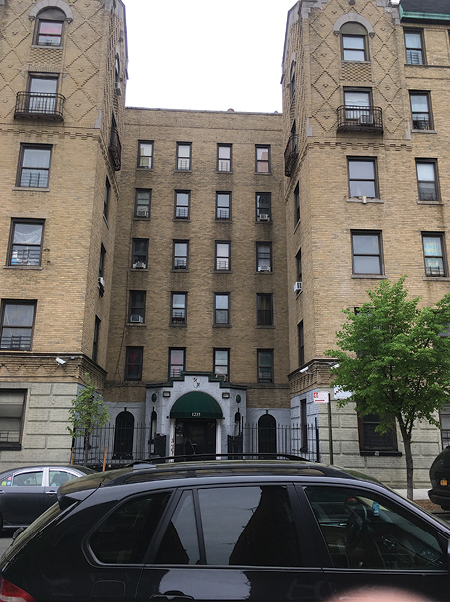 (7) An H-type building with two wings. 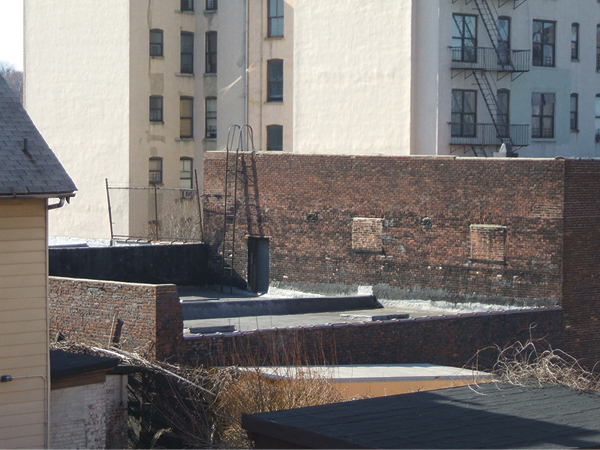 If available, depending on available staffing, send a company or a team to the roof to expedite roof-cutting operations. Roof cutting is critical to preventing fire spread. A good-sized hole will channel products of combustion up and out of the building, preventing the fire from mushrooming down and spreading horizontally. A hole should be manageable.

In a bigger building like a taxpayer, an eight-foot × eight-foot cut is recommended. In the average multiple dwelling, a three-foot × six-foot coffin cut is recommended (photo 9). Too small of a hole will not provide sufficient venting; too big of a hole can be labor intensive. The idea of a few smaller holes as opposed to one three-foot × six-foot hole is also not a good idea. 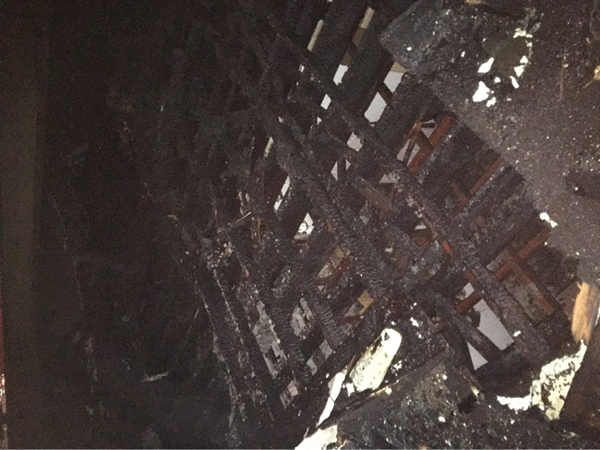 (9) A nice-size hole directly over the fire; it started as a three-foot x six-foot hole and was expanded.

Cut the hole after initial roof operations are completed. The firefighters on the roof should first open the bulkhead or scuttle, skylights, and windows. They should then try to make the cut directly over the fire if possible. To determine where the fire is, if not obvious, check soft spots—the base of a soil pipe, melting snow, the edge of the roof, and so on. After cutting the hole, communicate a ventilation profile to the IC. It is important to tell the IC exactly what you see.

There are times when a firefighter will tell the IC that there is fire in the cockloft when actually there is just smoke. Do not make any assumptions unless you are absolutely certain that the fire has entered the cockloft. Say instead, “We have heavy smoke in the cockloft” or “We have fire venting through the opening,” and let the IC make the determination. If fire is in the cockloft, a multiple alarm will be necessary.

This is the reason it is important to establish a Fire Sector as well. It is imperative to have a chief officer or an officer who is not too involved in the operation be able to see the bigger picture. Coordinating the advance of hoselines and opening the ceilings on the top floor is crucial. With an adequate hole over the main body of fire, the companies can hopefully stay ahead of the expanding fire. If this is not the case, the next step is to take some defensive action. 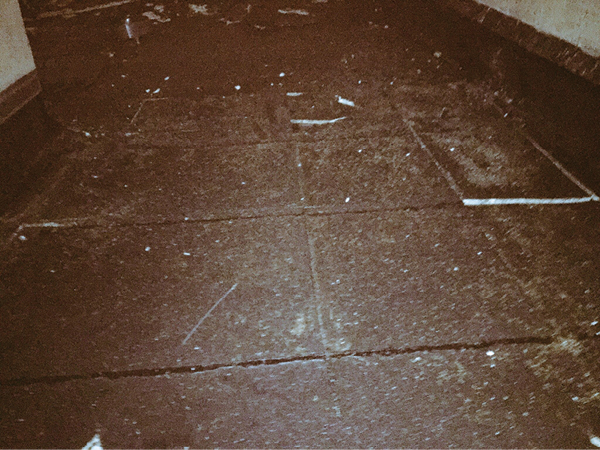 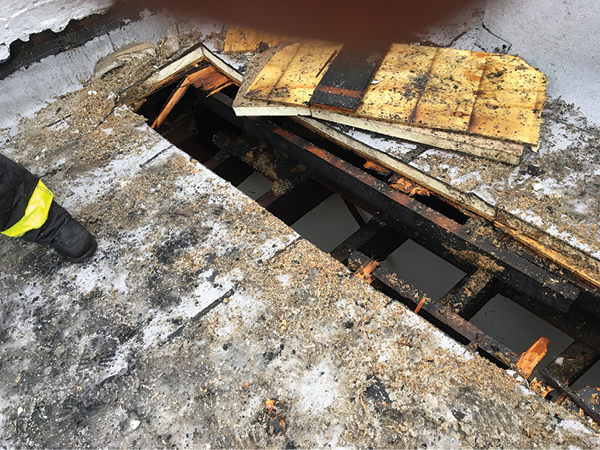 Make a trench cut (photos 10 and 11) three feet wide from wall to wall or some other suitable fire stop, such as a bulkhead. Make the trench cut at least 20 feet from the main vent hole. The concept of the trench is to try and contain the fire to one area of the roof. Members operating on the roof should constantly be aware of a second means of egress off the roof; do not make any cuts without first ensuring this (photo 12). Start, but do not necessarily pull, the trench. Cut two inspection holes on the fire side of the trench; if fire reaches the inspection holes, pull the trench. 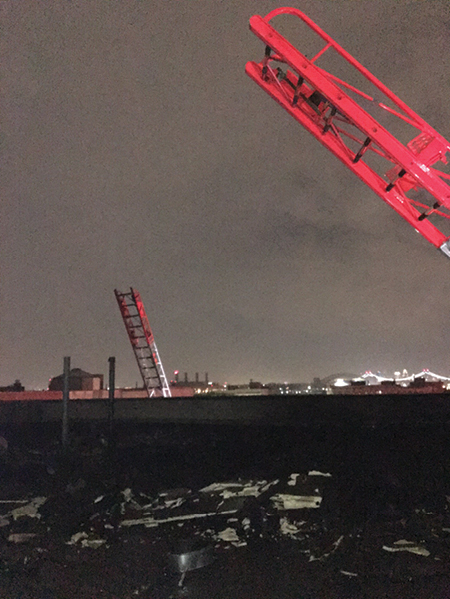 Watch for a possible double ceiling (photo 13). In heavy smoke, it is easy to miss a double ceiling while the fire is raging above behind the original ceiling. 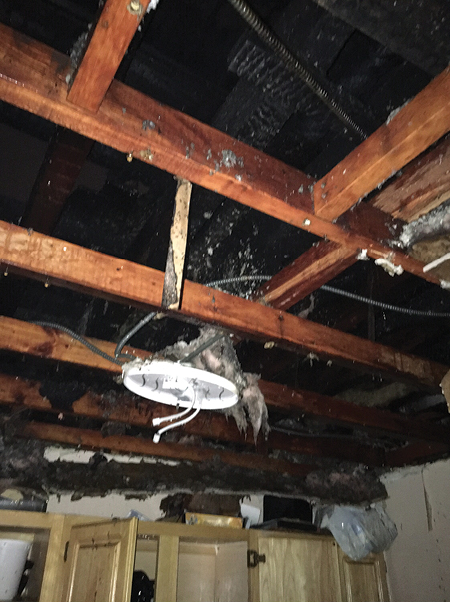 (13) A double ceiling will conceal fire.

Top-floor fires are very labor intensive. Prepare for numerous hoselines and relief for ladder companies on the top floor and roof. If the companies are not making good progress after about 20 minutes, consider pulling companies off the top floor and transitioning to a defensive operation. Prepare for a defensive operation early. Start thinking about placement of large-caliber stream devices before the street gets clogged with other apparatus. Preferably, reserve the front of the building for a tower ladder (photo 14) or, if your department doesn’t have a tower ladder, prepare to supply your ladder company’s ladder pipe. 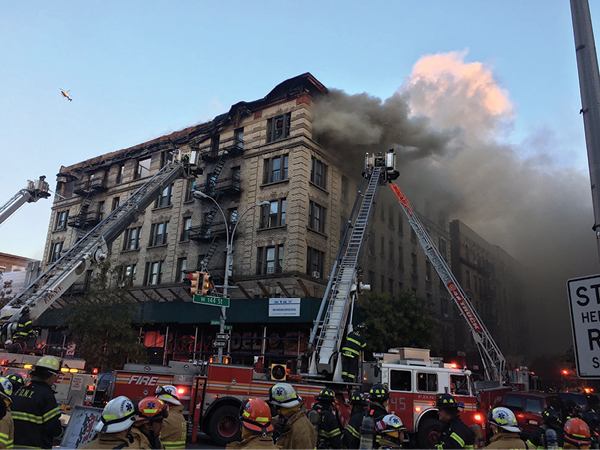 (14) Leave room in the front of the building for the tower ladder.

Ideally, use a tower ladder only as a quick knockdown of heavy fire. This is along the same lines of performing a transitional attack. If using the large-caliber stream, all personnel need to be off the fire floor and, if necessary, pull all units out of the building entirely. Water weighs roughly 8 pounds a gallon at 1,000 gpm; this adds a lot of weight to the building. A majority of the water stream will get absorbed by the fire itself, but there still will be plenty of water staying in the building. Have someone, perhaps a safety officer, monitor water runoff.

Recently, at a multiple-alarm top-floor fire, the water had accumulated to almost knee level in the apartments. The firefighters relieved some of the water accumulation by removing the toilet bowls in the bathroom to divert the water down the drain.

If you decide to go to a full defensive operation, the efficient and safe use of the tower ladder will be the issue. First and foremost, establish a collapse zone in front of the building. Position the tower ladder outside of the zone, preferably in a flanking position using the reach of the stream. Ideally, direct the stream into the windows at an angle to try and drive the stream into the cockloft from below. Moving the nozzle around and getting the stream up into the cockloft will greatly expedite the operation.

Top-floor fires will tax your resources greatly. Stay proactive, and get units going early. If you don’t need them, you can always turn them around.

Daniel P. Sheridan is a 32-year veteran of the Fire Department of New York, where he is a battalion chief. He has worked in Harlem and the Bronx for most of his career. He is a national instructor and the founder and chief operating officer of Mutual Aid Training Group.