WHAT WE LEARNED ❘ By MICHAEL J. BARAKEY

Successful firefighting operations occur through preparation by understanding and training on the buildings in a department’s response area or community. Although buildings are constructed using similar techniques and classified by common building types, the effects of fire on each building depend on the individual building’s structural integrity, the fuel load contained within, and the voids that exist because of construction and settling. Firefighters are expected to understand the anatomy of buildings while being able to predict fire travel based on not only commonalities of building type but also on a prefire inspection of the unique features and circumstances each building presents—e.g., fire escape locations, suppression systems, retrofitted utilities, and repurposed rooms.

Preincident planning and review of building construction may be the only indicators a firefighter or officer will have to locate and predict how fire will travel in a particular building. The information learned during preincident planning will be reinforced during the size-up phase of an incident and will allow officers and firefighters to accurately link the construction type of the building with the tactical objectives required to suppress the fire efficiently and safely.

Response at a Virginia Farm Building Fire with Trapped Animals

On September 4, 2019, Suffolk (VA) Fire & Rescue (SFR) was presented with a fire on the roof of a high-rise building that challenged firefighters and officers. SFR’s Battalion 1; Engines 1, 2, 3, and 4; Ladders 3 and 6; Rescue 1; Medic 1; and EMS 1 were dispatched to 112 West Washington Street for a reported commercial structure fire. The building, known as the “Old Bank Building of Suffolk,” is an eight-story Type 3 (ordinary construction) building that was built in 1916 and is 28,000 total square feet. The building’s exterior was unchanged from 1916; over the years, it has been though many interior renovations.

The building had about 80 potential spaces for lease. Between the eighth floor and the roof is a cockloft. This open space, between the roof and ceiling of the building, is not usable for living or storage but houses many of the building’s utilities such as pipes, ventilation ducts, and so on. The building had no standpipes and was not sprinklered. Although there were hose cabinets in the hallways near the stairwell on each floor, they were dry. The building was never retrofitted with modern firefighting capabilities, and the old hose cabinets still had pipe-style fittings. These hose cabinets were once supplied by a rooftop gravity tank, but that system has been out of service for years. With one interior stairwell for the entire building and no ability to get water to the fire without a direct hose pull from the street or an elevated standpipe from an aerial ladder, preplanning provided the responding firefighters and officers with the knowledge to get water to the area in the building that was on fire. 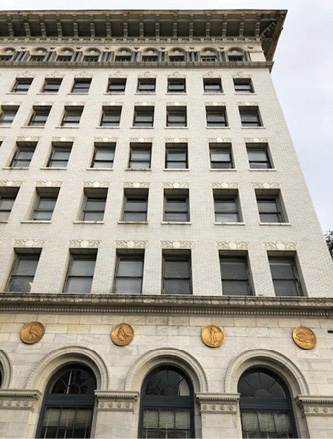 (1) Tower 112, built in 1916, is virtually unchanged over the past century with regard to automatic fire suppression systems. (Photo by author). 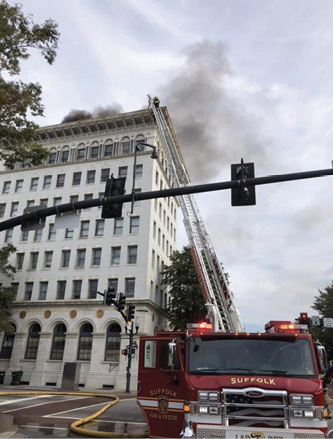 (2) Engine 1 arrived and reported heavy fire and smoke showing from the roof. (Photo by author.)

Engine 1 arrived and reported heavy fire and smoke showing from the roof. Engine 1 established command and was notified by the dispatcher that the building was being evacuated. Knowing the building through preplanning and multicompany drills, the company officer initiated the incident action plan by assigning Ladder 3 to the A/D corner of the building for a flying standpipe; he knew the building was occupied and undergoing renovations, so evacuation was necessary. Engine 1 and Rescue 1 crews climbed interior stairs to the roof carrying high-rise packs to investigate the size and location of the fire.

As the interior crews made their way to the roof, Ladder 3 set up on the A/D corner and secured a water supply, prepared the waterway with the proper connections for the elevated standpipe, elevated the stick, and prepared to supply the handlines on the roof. On Floor 7, the interior crews were met by a maintenance man who confirmed the fire was on the roof. The maintenance man pulled the house hose from the seventh-floor hose cabinet but confirmed what crews knew from preplanning the building: There was no water in the house hose. 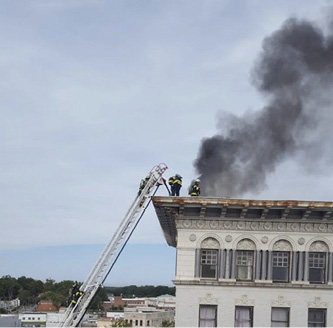 (3) Ladder 3’s crew ascends the aerial while Engine 1’s and Rescue 1’s crews hook up the flying standpipe from the tip of the aerial. [Photo courtesy of Suffolk (VA) Public Schools.] 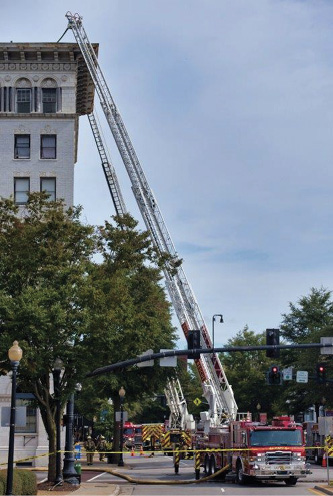 (4) Ladder 3’s position on the A/D corner and with the flying standpipe in operation. (Photo by author.)

While the interior crews were locating the fire, Battalion 1 arrived and set up the command post on an overpass that had excellent visibility of the building and fire; command was then transferred from Engine 1’s officer to Battalion 1. Command then assigned additional arriving battalion chiefs to Operations and the Roof Division. Engine 2 was assigned to ascend the interior stairwell and perform a primary search of all floors while Engine 4 performed a secondary search. After completing the primary search, Engine 2 was on the floor below the roof to check the cockloft for extension of fire from the roof to the floor below.

As Ladder 3 was setting up, Engine 1 and Rescue 1 crews prepared their high-rise hoses—two 1¾-inch hoselines off a 2½-inch leader line—to attach to Ladder 3’s elevated standpipe. Engine 3 and Ladder 3 crews ascended the aerial truck and made access to the roof from the tip of the ladder to the parapet of the roof. Crews on the roof confirmed to command that active fire was on the roof and the parapet on the B/C corner. The attack lines were put into service by establishing the connection to the flying standpipe on the tip of Ladder 3. Engine 1 and Rescue 1 crews then started to attack the fire. 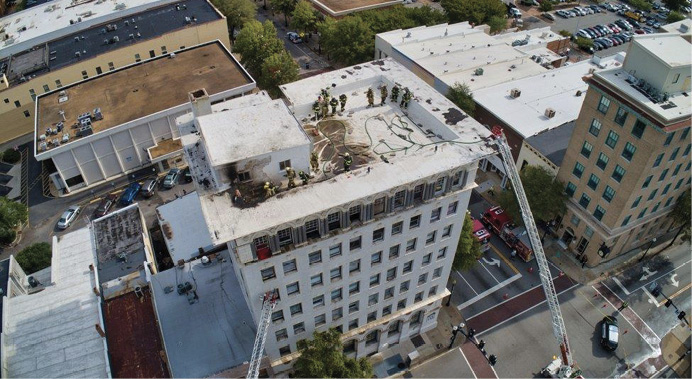 (5) A drone’s view of the roof after fire suppression and during overhaul of the roof and cockloft area. (Photo courtesy of the City of Suffolk, Virginia). 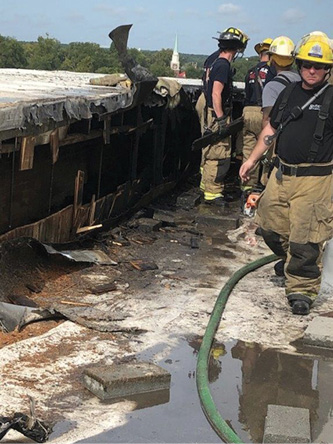 (6) On the roof, the fire traveled into the parapet, which provided a large area of open space for fire to travel. Extensive overhaul identified hidden fire traveling toward the cockloft. (Photo by author.) 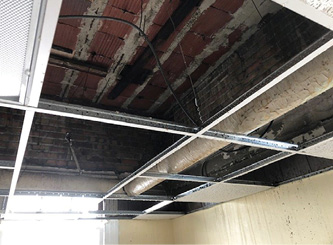 (7) Pictured is the cockloft area directly below the roof and parapet that was involved in fire. Engine 2’s crew opened up the area below and checked for extension during fire attack. (Photo by author.)

The fire was knocked down by the two 1¾-inch high-rise lines that were supplied off a 2½-inch leader line off the stack tip on the aerial. After the fire was knocked down, an extensive operation occurred to locate hidden fire in the large parapet that surrounded the entire roof, which was tied into the cockloft separating the top floor and the roof. Engine 2’s crew worked to open up below the parapet and the roof crews opened up from the top. After the hidden fire was extinguished, fire investigators worked to identify the cause and origin of the fire. They isolated the origin to the exterior area of the penthouse on the roof line of the parapet. The cause was not determined and is under investigation.

SFR learned the following lessons at this incident.

MICHAEL J. BARAKEY (CFO) is a 28-year fire service veteran and the chief of Suffolk (VA) Fire & Rescue. He is also a hazmat specialist; an instructor III; a nationally registered paramedic; and a neonatal/pediatric critical care paramedic for the Children’s Hospital of the King’s Daughters in Norfolk, Virginia. Barakey is the participating agency representative and former task force leader for VA-TF2 US&R team and an exercise design/controller for Spec Rescue International. He has a master’s degree in public administration from Old Dominion University and graduated from the National Fire Academy’s Executive Fire Officer Program in 2009. Barakey authored Critical Decision Making: Point-To-Point Leadership in Fire and Emergency Services (Fire Engineering), regularly contributes to Fire Engineering, and is an FDIC International preconference and classroom instructor.