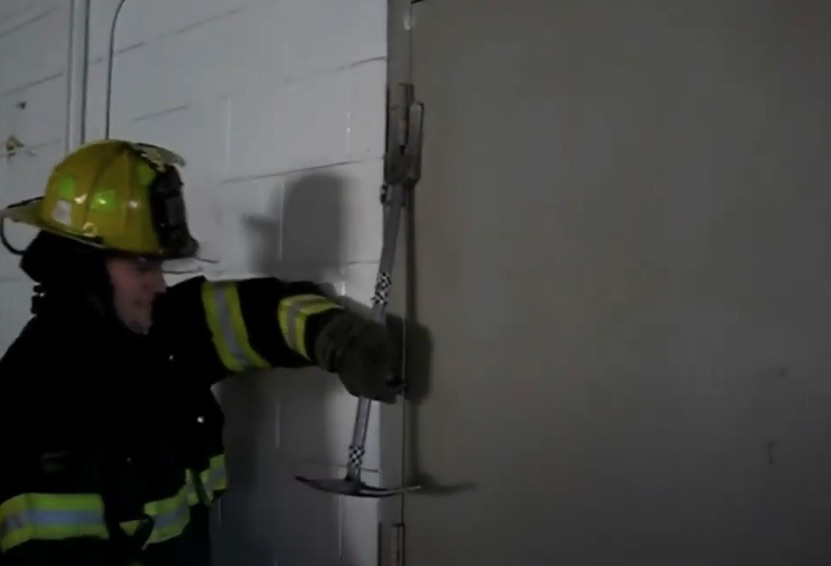 Article and Photos by Samuel Hittle and Chad Dailey

If one were to make a forcible entry algorithm, a hinge-side attack would appear very low in the process and conventional methods would be at the top. This is for a good reason. Conventional attack is adequate and quick to perform on the majority of doors encountered. Unfortunately, because of this, hinge-side methods are too often ignored during our forcible entry training. It is viewed as a tool that “probably won’t be needed.” If your training reflects this sentiment, you are “probably” missing a valuable tool in your arsenal. A well-trained and experienced company recognizes the value in being skilled at removing the hinges on outward swinging doors.

Although rare, there are times when a hinge-side attack is preferred to conventional forcible entry on the latch side. Like any technique, this will be dictated by the objective, what size-up shows us, and the tools immediately available to the crew. If the goal is to work master streams through the entry point, and the door occludes certain angles or the potential exists for the door to encumber the stretch, it must be completely removed. Other times, crews may encounter doors that have excessive security measures on the latch side. This can be the case with both purchased doors and after-market alterations. In most situations, a tenant protecting his property will focus all the attention on the latch side, leaving the hinge side more vulnerable with quicker means to get in. The following media look at a few scenarios in which directing the circular saw to the hinge side will be the fastest way in. The media also illustrates instances when access is possible with only irons available when attacking the hinge side.

Media 1: On the street, there are various reasons a hinge-side attack with a saw or the irons might be preferred.

Even basic hinges for outward swinging doors are typically constructed with at least one pin that is not removable. Elimination of the bottom cap with the adz or ax blade may or may not allow the pin to come out. Attempting to remove the pin on all the hinges is slow, and success isn’t guaranteed. More advanced hardware ensures that the pin cannot be removed when the door is closed, regardless of what is done to the bottom cap. They use set screws, shear-resistant studs, or fast-riveted (crimped) pins–in short, attempting to remove the pins is a gamble that may only create frustration while costing you valuable time, since it’s difficult to determine the hinge’s level of security by looking.

Drill: Getting More From Doors

Top hinge-first philosophy.  Companies that practice this like that the door can vent a little as they work their way down, thereby reducing the chance of a hostile fire event when the door is opened. The other advantage is that when using hand tools, the top hinge will be the hardest to eliminate. Focusing on it first will make it easier if the individual has not already been worn out by working on the other hinges.

Top hinge-last philosophy. Companies that practice this method like the benefits of protection as they work. Because the weight of the door will hang on the top hinge, smoke and fire are better contained until crews are ready to enter. This is particularly important if you’re trying to prevent contamination of an environment that is not immediately dangerous to life and health (i.e., waiting for a line, victim removal, or an occupant evacuation).

Without question, this method is preferred to using irons. If you have a saw and the environment allows it to function, use it. Like any circular-saw operation, make sure you understand the blade being used. An aluminum oxide blade requires a more gentle approach to prevent the blade from coming apart. Let the weight of the saw and composition of the blade do the work. A diamond blade, on the other hand, requires that you put your weight into it, or the cut will take forever.

A common problem encountered when using the saw is failure to completely cut the hinge off.  If pressure is felt to get the door open, firefighters can be enticed to cut just one side of the hinge. This only works if the cut is made from the appropriate side. If the saw is being operated from the front of the door and only one side of the hinge is cut, getting the door open will be more challenging because it requires the door to be forced around the pins (Media 1). This will take time and effort by the crew. With all things considered, cutting both sides of the hinge is comparable in seconds to cutting only one side because the surface area of the blade is significantly reduced, allowing it to cut more efficiently (Media 2).

Media 2: Cutting the hinge completely off takes about the same amount of time to complete as cutting just one side.

If you don’t have a saw, send for one. But get started with hand tools in case Murphy was bored, showed up on your fireground, and decided to impose his law (i.e., the saw fails to work or never makes it to you).

Many believe that shearing the screws is a viable option. Like cutting one side of the hinge, it has to be done from the appropriate side: The adz will quickly incur damage during the operation, making it less and less effective; the process is very slow; and it will exhaust the crew. We recommend you spend some time training with this technique prior to the alarm to appreciate how hard this method is before relying on it.

We have found the following process to be the quickest and most feasible. To remove the top hinge, place the forks of the halligan around it, and move the tool back and forth vigorously. This will heat up and weaken the screws, assisting in a quicker extraction, much like breaking a paper clip with your hands. Then get behind the bar and apply outward force (Media 3). If unsuccessful, try weakening the screws again, and apply force once more. Circling through the process will eventually bring successful results.

You can do a few things to assist in weakening the hinge assembly. Spending time to drive the forks on it will create a better bite, helping to ensure that the halligan does not slip off as readily, while at the same time pulling the hinge away from the door as the forks get fatter near the pin. Another option to assist in stressing the screws is to beat the front and both sides before putting the forks on it.

Media 3: Moving the hinge back and forth before pushing outward will weaken the screw.

Once the top hinge is off, the other two hinges are easy. The same process used to remove the top one can be repeated; a quicker approach is to hammer them off. This is where forcible entry centers on “force.”  The middle and bottom hinges typically don’t stand a chance with a solid swing and good aim of the ax (Media 4).

Media 4: The middle and bottom hinges can be removed by forceful strikes with the ax.

With the hinges removed, the door can be opened using the adz in the same way as if performing conventional forcible entry on the latch side of an outward swinging door. The void where the hinge previously was makes a good purchase point for the adz and for quick removal. If a door closer is present, place the forks of the halligan on the arm where it is attached to the door frame and pry downward or strike it to completely free the door.

Forcible entry is a function of adapt and overcome. The technique we start with doesn’t always get us in. A technique that is successful on one type of door will fail to open others. This is why crews need to understand the benefits of different methods and train on them. Don’t get caught standing outside because you failed to be ready to stage a hinge-side attack when it was called for.

SAMUEL HITTLE is a fire lieutenant with Wichita (KS) Fire. He has an associate degree in fire science; is a Wichita HOT instructor; and is a contributing author to Fire Engineering and Urban Firefighter Magazine. He is an FDIC 2012 instructor and lecturer

CHAD DAILEY is a fire captain with the Kansas City (MO) Fire Department. He currently serves as a company officer rescue specialist on a rescue squad and is a member of Missouri Task Force 1.  He also instructs for the University of Missouri Fire Rescue Institute and Brotherhood Instructors.