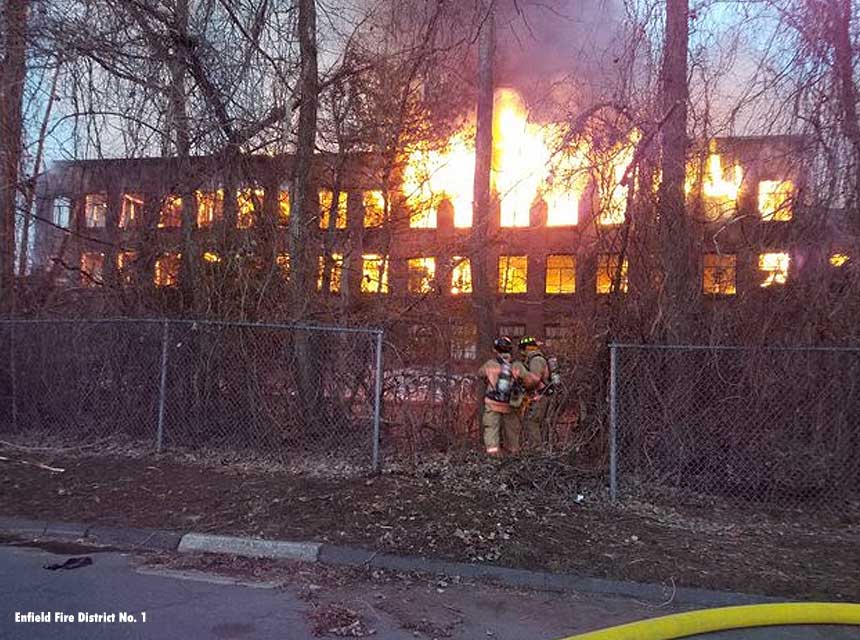 Mar. 25—ENFIELD — State officials said they are monitoring the site of a former casket-making building after a fire tore through the historic building Wednesday.

A spokesman for the Department of Energy and Environmental Protection said the building will need to be demolished, and some of the building materials contained asbestos.

“The building is owned by the town of Enfield, and the town has retained a contractor to conduct environmental remediation,” said Will Healey, the agency’s spokesman.

Runoff from the site is going into the Connecticut River nearby, “though no oil sheen or fish kill has been observed at this time,” Healey said.

The contractor has sent water samples to a laboratory for testing, Healey said.

“Air pump monitoring for asbestos is ongoing with no elevated levels noted,” he said.

A second contractor has been retained by the town to demolish the building and remediate asbestos from the site, according to DEEP.

The three-alarm fire resulted in the building’s partial collapse, the post said. Multiple fire units were called to the scene, and the fire resulted in power outages and rail service disruptions.

One firefighter was hospitalized for a stress-related injury but was treated and released, NBC Connecticut reported. The outlet reported the building was a former casket-making company.

Enfield police said part of Main Street was closed and access to North River Street had been sealed off as of 7:30 p.m.