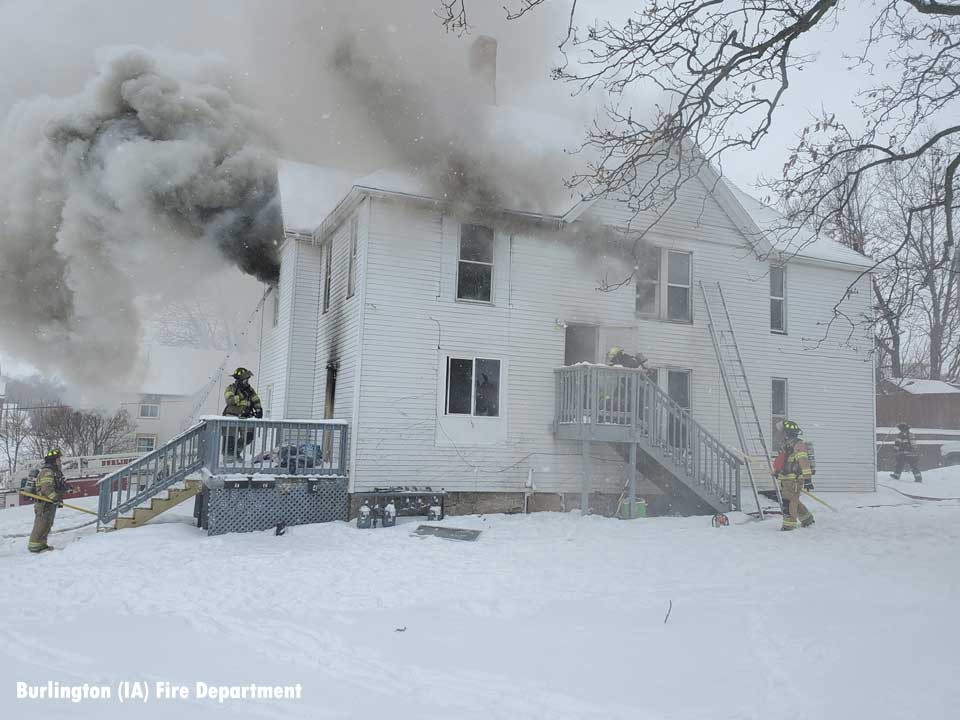 Feb. 11—Two residents of a four-unit apartment building on the corner of Division Street and Woodlawn Avenue watched helplessly from a vehicle Wednesday as smoke billowed from their home and firefighters worked to extinguish the blaze.

The Burlington Fire Department was notified of the fire at 217 S. Woodlawn Ave. shortly before 10:30 a.m. when a tenant reported smoke detectors in the building had been activated and that smoke was visible within.

The tenant also notified building owners Luke Caston and Jake Caston, who arrived at the scene in three minutes.

“One of our tenants called me and we just happened to be right down the street,” Luke Caston said from inside Fire Marshal Mark Crooks’ vehicle, which was parked along a section of Division Street that had been cordoned off for emergency vehicle access.

Upon arrival, the Caston brothers entered the building in hopes of finding the source of the fire and to make sure no one was inside, but they were overpowered by smoke.

“We didn’t last long. We had to get out of there,” Luke Caston said. “We hollered for their names and that was it.”

Only one tenant had been in the building at the time the fire began, but they were able to escape without injury. The building’s remaining tenants, including one dog, were not home at the time and all have been accounted for. Two of the building residents watched from their car but declined to comment.

Battalion Chief Bruce Workman of the Burlington Fire Department said firefighters arrived to discover flames on the first floor and smoke throughout the building.

“It was quite involved when we got here,” Workman said as firefighters worked in shifts to get the fire under control.

The BFD called in aid from the West Burlington Fire Department as well as to all off-duty firefighters. In total, 27 firefighters responded to the scene.

Workman said the building’s balloon-frame construction — having no fire stops between floors — allowed the fire to spread quickly throughout the structure.

“(Balloon-frame construction) is typical of these turn-of-the-century homes,” Workman said.

According to Des Moines County property records, the South Woodlawn was built in 1900.

“With these slippery conditions, you have to be extra careful with your footing,” Crooks said, adding there also were concerns about the possibility of emergency vehicles sliding downhill.

Firefighters opted to slide down the hill between the sidewalk and the structure rather than risk the stairs, and, despite the frigid temperatures, took turns hosing each other off in an effort to wash away insulation and other debris they came into contact with while inside the building.

A damage estimate for the building and its contents has not yet been determined. Luke Caston said the building is insured.

This report will be updated as information becomes available.