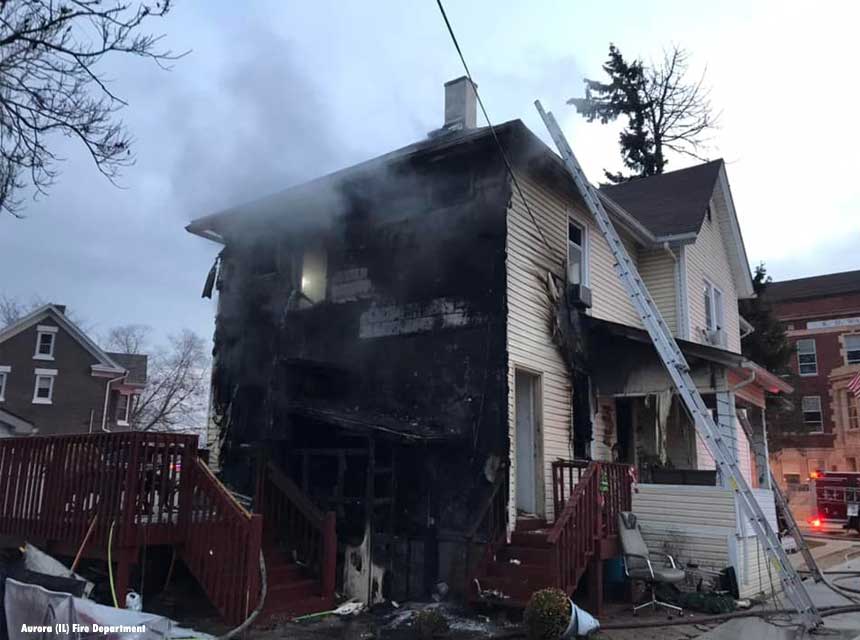 Nov. 30—Five residents, including some who were hanging out of second-floor windows, were rescued from a burning home on the first block of Jackson Street in Aurora over the weekend, Aurora police and fire department officials said.

Officials continue to investigate the fire in the Aurora home on the city’s East Side on Saturday morning that injured the five residents, including a man in his 30s who was listed in critical condition with severe smoke inhalation following the fire. His current condition is not known as of Monday evening.

Along with the five residents who were injured, an Aurora police officer suffered minor smoke inhalation during the fire, Aurora Fire Department officials said in a news release.

The fire began around 6:12 a.m. Saturday in the two-story multifamily home on Jackson Street. When police arrived, they found several residents hanging out of the second-floor windows in the front of the home with heavy smoke rapidly overtaking them, fire department officials said.

Officers found a ladder in the back yard and used it to rescue the residents, according to officials. Two men, aged 33 and 47, and two girls, ages 14 and 15, suffered minor burns and smoke inhalation during the fire.

Firefighters arrived and began extinguishing the fire and searching for additional victims. During the search, they found an unconscious man not breathing in the basement, officials said. He was taken out of the home and to a local hospital in critical condition.

Police said Monday evening the cause of the fire is still under investigation by police arson investigators and Aurora Fire Department investigators, with assistance from the Office of the State Fire Marshal.

Eight people were left homeless because of the fire, authorities said.

Aggressive and Practical Search: It’s Still About the Victim