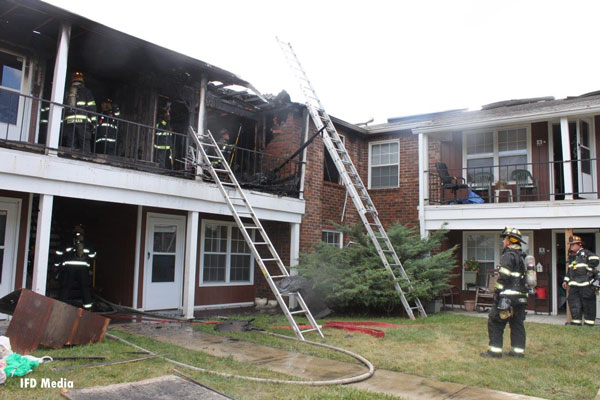 SEE PHOTOS FROM THE SCENE >>

One woman jumped from a second-story window and three firefighters were injured Sunday afternoon after fire broke out in an upstairs apartment at S Keystone Ave. in Indianapolis, Indiana.

The woman told firefighters that she was home asleep in her upstairs apartment when she awoke to the sound of breaking glass and heavy smoke. Her egress was blocked and she was trapped in her bedroom, so she jumped from her second-story window, sustaining only slight bumps and bruises. She was checked out at the scene and signed a Statement of Release (SOR).

Firefighters from Ladder 35 initiated a primary search and heard yelling coming from the apartment across the hall from the fire apartment. A female victim, 54, was unable to evacuate and yelled for help. The fire intensity grew rapidly and heavy black smoke filled the common open stairwell between the two upstairs apartments.

Making entry into Apartment #2, firefighters grabbed Sharon and started back downstairs.  Shielding her face with their bodies they made their way across the landing and headed down the stairs. It was then that the fire flashed and enveloped the upstairs landing from front to back.

The three firefighters injured in yesterday’s fire have all been released after care at the Eskenazi Burn Center. Originally thought to be possible steam burns, the firefighters burns were actually thermal and caused by the intense heat they faced as the fire blew out of the apartment and through the open landing. Burn patterns on their gear is consistent with the often deadly consequences that flashover conditions can produce during both rescue and attack operations. The fact that they nor the civilian were not severely injured is both a testament to their quick actions and a couple of good guardian angels.

Attack crews were able to mark the fire under control within 10 minutes. Four units were damaged by fire, smoke, or water, and eight residents were displaced. Damage is estimated at $400,000.

Going ‘Back to School’: An Inexpensive Way to Train