Crews made an aggressive interior attack and used several master streams to control this fast-moving apartment fire in Indianapolis, Indiana.

Firefighters responding to the Sunday fire at the Stone Lake Apartments had reports of possible entrapment that proved unfounded. All occupants managed to escape prior to the arrival of the fire department, and there were no injuries. About 76 firefighters responded to the fire, which went to two alarms and affected about eight units of the complex.

There were no access issues or problems with the building, however the front of the structure faces the lake, and this was where the majority of the fire was. The firewalls inside the structure worked as intended and helped stem the spread of fire. 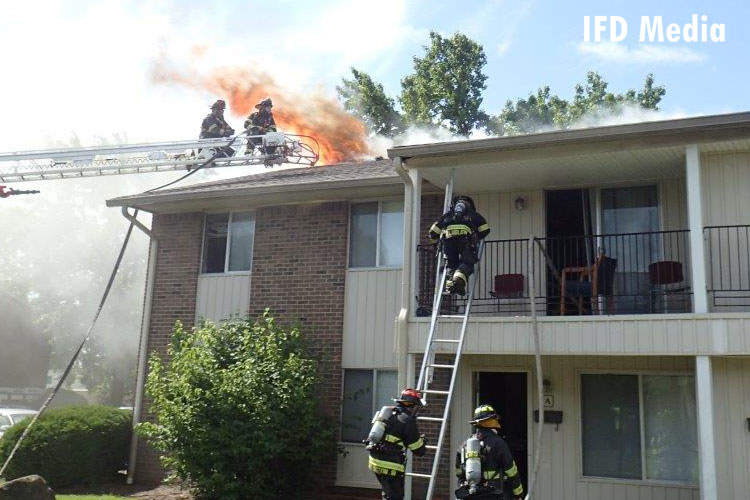 Indianapolis firefighters responded on July 1 to a working apartment fire at the Nora Pines Apartment complex.

Crews contended with heavy fire and smoke showing at the two-story, ordinary construction building. Firefighters initiated an aggressive offensive attack and had the fire rapidly under control.

One firefighter suffered a minor heat-related inury while a civilian suffered an unspecified injury and was treated on scene. A total of 20 people were displaced, and damages were estimated at $500,000.

An adult male occupant told investigators that he was frying chicken on the stove. He apparently fell asleep and was awakened by his smoke alarm to find his kitchen on fire. All occupants were out of the structure prior to firefighters’ arrival.

The biggest obstacle for firefighters was fire breaching common attic and void spaces and getting ahead of attack crews.