A woman was transported in serious condition after this recent house fire in Indianapolis, Indiana.

Neighbors say six adults lived in this structure, but only one were at home when the fire broke out. One of the occupants, a 67-year-old male, told firefighters that he was sitting on the front porch of the home when he began to notice smoke. He thought it might be trash somewhere behind the house. Within minutes he realized that the smoke was coming from his home and that the living room downstairs was on fire. He immediately opened the front door and yelled to a female occupant, who was upstairs, to get out.

When he opened the door, introducing oxygen, the fire took off. The woman told firefighters that when she came downstairs, she was confronted by thick black smoke and became disoriented. Instead of running to the back door, she ran toward and out the front,  sustaining injury from the intense heat of the fire as she basically ran through it.

There were no working smoke detectors in the home.

RITA L. REITH is a battalion chief with the IFD and serves as the agency’s public information officer. 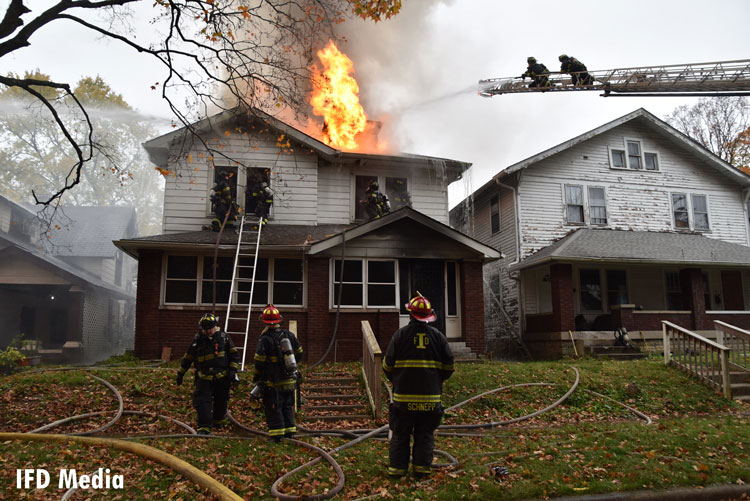 Photos and write-up by Rita Reith

Indianapolis (IN) firefighters responded Friday to a fire in a “vacant” double residence.

A squatter told firefighters that he was inside the structure asleep when the fire occurred. He awakened to the smell of smoke and escaped the building on his own. The man was transported to a local medical facility with high levels of carbon monoxide in his system.