Photos and report by Rita Reith

Indianapolis and Wayne Township (IN) firefighters responded to a fire Monday that ravaged Scarborough Auto Parts.

Crews found heavy fire and smoke showing from the two-story building of corrugated metal construction. There were no reported injuries to firefighters.

The only issue firefighters encountered on scene was the extensive hose lay required to cover the distance from hydrant to building. Initial crews used the entire hose beds of two engine and laid 1,200 feet of 5-inch from the hydrant to the engine in front of the building to establish primary water supply. (Most Indianapolis Fire Department engines carry 600 feet of 5-inch supply line–some carry 800).

Crews attempted to establish a secondary water supply per standard operating procedures, but despite using three apparatus and 1,800 additional feet of 5-inch, they still fell short because of the positioning of hydrants in that area. Having an operational second supply line is critical to ensuring that the safety of the firefighters does not get affected if the primary supply line malfunctions. For instance if someone were to drive over the supply line and break it, or an engine pump quit working the secondary supply line, already established, would allow operations to continue without interruption. 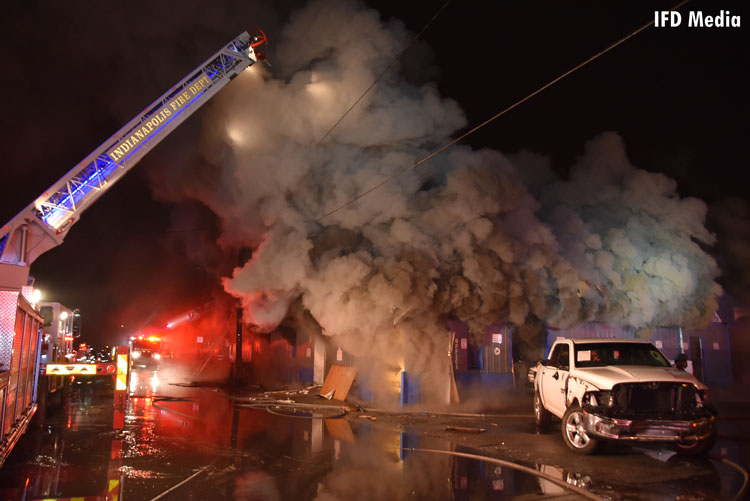 Indianapolis firefighters responded to a recent fire in a body shop business that presented a number of challenges.

Crews used large amounts of water used to extinguish fire, which quickly flooded the intersection of Keystone Ave and Washington St. as drains became clogged with debris and drainage could not keep pace with the output. Firefighters were operating in a “pool” of sorts, burying hoselines and equipment underneath 10-12 inches of water, which made work difficult and dangerous.

Power lines around the structure were carefully monitored– until secured–as flames threatened to burn through the live lines and drop them into the pooled water where firefighters worked. This was the second this morning fire for the crews, who had just finished battling a large vacant residence fire around the corner on Tacoma hours earlier.