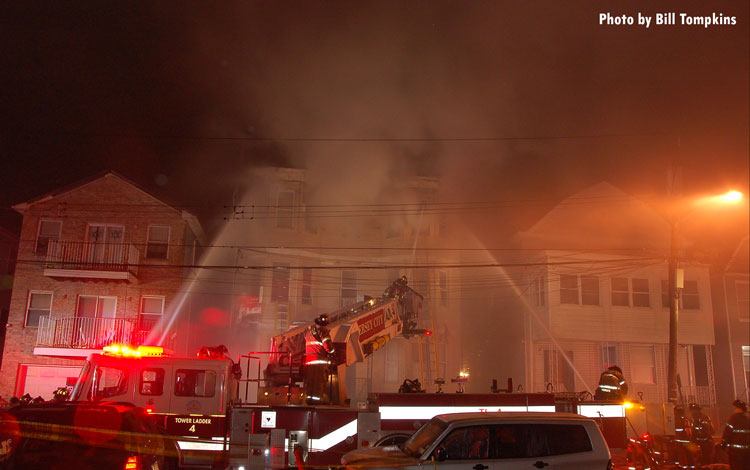 Story and photos by Bill Tompkins

Three residents and one firefighter were injured battling a four alarm fire in Jersey City on January 31, 2018.

The fire at 21 Grant Ave. started about 7:00 PM in the basement of the three-story multi-family building. Firefighters encountered heavy fire in the basement with flames extending upward. A second alarm was transmitted.

Two men were pulled from their basement apartment by firefighters. One was hospitalized with life-threatening injuries due to burns. The other man fled the scene and investigators are trying to locate him. A six-month-old baby was rescued from above the fire and was removed unresponsive due to smoke inhalation. The baby was revived at the scene and transported to the hospital. The infant is expected to be okay. Another resident received a hand injury, and one firefighter was treated for burns to his hands.

Flames traveled upwards and soon heavy smoke was pushing from the roof vents and third floor windows. Additional alarms were sounded and, as conditions continued to deteriorate, members were withdrawn and operations went defensive. Tower Ladder 4 went to work in front of the structure and several lines operated into the fire building and protected the exposures. Smoke continued to vent for about three hours until the fire could be placed under control.

More of Bill’s photos from this fire at www.btfirephotos.com.