Scenario: You arrive to a working garden-style apartment with heavy fire exiting from the second-floor front door. Do you give much credence to the metal hand railing at the top of the landing? Well, you should…

In this scenario, you will have to begin knocking down the fire from the stairs prior to entry. When making the approach with your initial attack line, the mental size-up that each firefighter performs should also identify whether or not the metal hand railing is being exposed to fire. Why? At a recent apartment fire, the initial 2½-inch attack line was stretched to the stairs and charged. Fire was knocked down in the second floor breezeway and the line was then maneuvered aloft. Once on the landing, the hoseline came into momentary contact with this hand rail, resulting in a sudden failure of the line.

How often do our hoselines get repositioned onto these railings in the interest of gaining “slack” or removing trip hazards from later-arriving companies trying to ascend the stairs? It does not require a prodigious amount of exposure time before this thin gauge, box tubing becomes exceedingly hot! Definitely hot enough to burst our synthetic hoselines as was witnessed at this incident. When charged, our hose has an acceptable performance record of resisting failure secondary to contact with heated objects. But not this time.

In today’s race by manufacturers to create lighter, more manageable 2½-inch hose, this occurrence has become a realistic concern that needs to be identified as soon as the fire unit comes into view. Recognizing this potential problem will shave off critical minutes of the knockdown. You won’t have to stretch another section, which may make all the difference between keeping this fire to the unit of origin or watching it run the common attic and displace many more families. Perhaps a search team has laddered and entered the Charlie side windows and is relying on the protection of your stream? Taking a few seconds to address the hazard will undoubtedly pay off in the long run. The nozzle firefighter deals with this by simply cooling the railing down while knocking the fire back within the breezeway or landing. He should communicate this hazard to his “backup” or “heel” firefighters so that they too can address “pinch points,” thus continuing to keep the line off the railing. Off-loading excess hose onto the landing will also assist with this and should be automatic; this is best practice to avoid the hazard entirely.  If needed, continued cooling may occur with the secondary or backup line. There will be a backup line stretched, right?

The hazard listed above was a super-heated hand railing, but please be mindful of any other hazards that may render your hoseline out of service. Keep an eye out for other metal hazards such as thresholds (kick plates), windows or door frames, or fallen burning embers on the stairs and fire floor landing. In addition, sharp objects may lead to significant compromise of hoselines in the form of large leaks or a complete failure of the hoselength all together. Attentiveness and diligence exercised during the stretch is critical. Performing a “sweep” with the hose stream on the landing and threshold prior to making the interior attack will neutralize most of these additional hazards. Damage to the line could lead to a failed operation and can occur when the hose is charged or uncharged. You know the saying: “Take time to make time.”

On arrival, slow down a little and take it all in. In these days of being able to “go on air” while en route, consider holding off until you arrive to the fire building and your line is in place and ready to be charged. Those precious few moments of taking a knee to don your breather while waiting for water may be all you have to achieve a widened gaze over the incident. Use them wisely. Exiting the cab masked up may deprive the attack team of this crucial benefit. 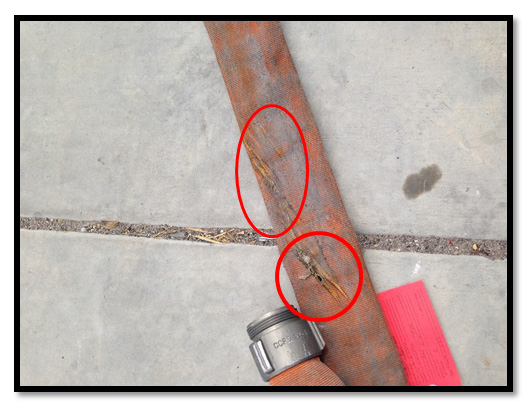 (1) Momentary contact was all that was needed to melt and fail this charged 2½-inch attack line. (Photos by author.) 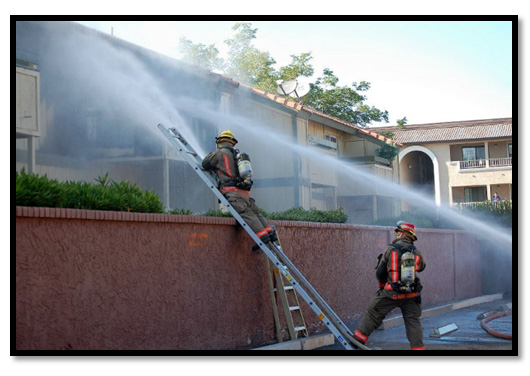 (2) Completing the first stretch in a rapid yet methodical evolution is critical to early extinguishment success, especially when arriving to a combustible-sided apartment house with a history of rapid fire progression. The only way to achieve this success is through stretching lines in these same structures prior to the fire! As an added benefit, it has been my experience that the public loves seeing their firefighters training on and within these multifamily complexes. They will thank you! 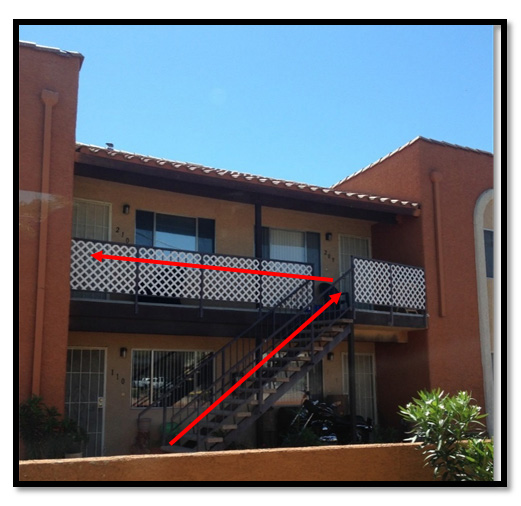 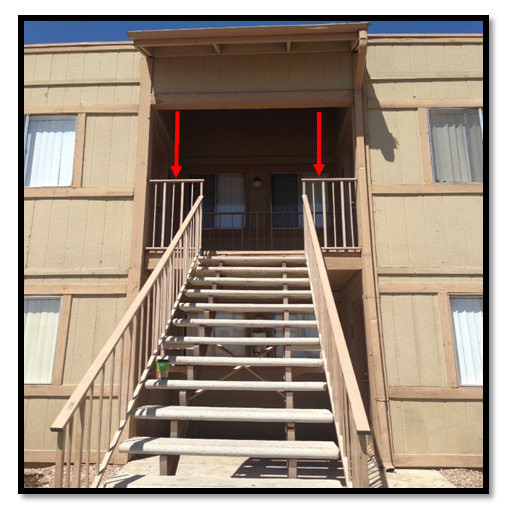 (3, 4) Pics from  above and below. Although ill-advised, hose being stretched up this section of stairs to attack a fire in the left side apartment could easily result in a firefighter repositioning the line over top of the railing. This would be done in the interest of decluttering the stairs and gaining a few feet in the overall stretch. It may also inadvertently come into contact when confronted with a smaller enclosed landing that will make it difficult to offload excess line. If the attack team has already entered the fire compartment when the hose failure occurs, a rapid retreat may be needed. This is all the more reason to cool the railing and stretch a secondary backup line.

The following information describes the hose that failed:

Author’s Note:Thanks to Dennis LeGear, Brian Brush, Steve Kerber, Curt Isaakson, and Andrew Brassard for their help with this document.

Colin Kelley is a 13-year firefighter with the Clark County Fire Deptartment in Las Vegas, Nevada.

On The Road with Bobby Halton Video