April 8, 2008, was the worst day of my career as well as the worst day in my department’s history. At 0612 hours on a cool, rainy morning, the Colerain Township (Cincinnati, Ohio) Department of Fire and Emergency Medical Services Engine 102 and other units were dispatched to a smoke alarm activation by the alarm company. As per our response guidelines, two engines, one ladder, and a battalion chief initially responded. While responding, units were updated that the homeowner phoned dispatch of a working fire in his home’s basement. The alarm assignment was updated to a full structure fire response, which sent to the scene two additional engines, a second ladder company, a rescue company, a medic unit, and a rapid assistance team.

On arrival, the officer of the first-arriving engine confirmed a working fire. The crew stretched a 1¾-inch attack line through the interior stairwell to the basement and the seat of the fire when a flashover occurred and the crew retreated to the first level. As they retreated, the floor failed; Captain Robin Broxterman and Firefighter Brian Schira fell into the basement, and they became entrapped. Subsequently, the officer and the firefighter perished in the basement.

As we look back on that day, we can think only of the terrible tragedy that occurred and what our department could do differently to prevent it from happening again.

As the result of this tragic incident, the department considered the operations outlined by the Investigation Analysis of the Squirrels Nest Lane Line-of-Duty Deaths final report. Several recommended changes were implemented to lessen the risk to firefighters during fireground operations. One of these key changes was the development of a standard operating guideline (SOG) to combat belowgrade fires. It specifically outlined entry points for fires in structures with and without walk-out basements. Other key points were enhanced company response, a 360° size-up by the first-arriving officer, early utility control, and several other recommendations.

In 2014, the department also adopted the use of a transitional attack (another “tool in our toolbox”) for fighting structural fires as recommended in studies conducted by Underwriters Laboratories. On November 19, 2016, all of these lessons learned came together. 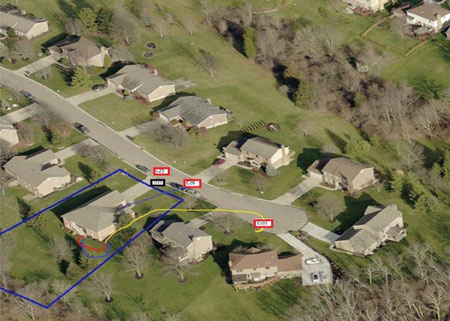 The involved dwelling (photo 1) on that date had the following characteristics:

The weather that day was the following:

At 1009 hours on November 19, 2016, we received a call to dispatch for smoke alarms sounding and smoke filling the residence. A full structural response assignment consisting of four engine companies, two ladder companies, one rescue company, one medic unit, and a battalion chief was dispatched. 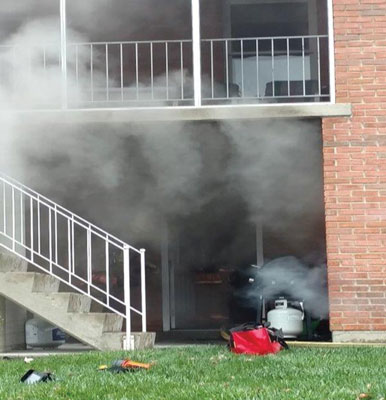 The first engine company with three personnel (as per the Occupational Safety and Health Administration’s two-in/two-out requirement) arrived on the scene within five minutes. The company officer radioed an on-scene report of heavy smoke showing from a single-family, wood-frame dwelling. The engine pulled past the residence and used the fire hydrant in the cul-de-sac for a water supply. The engine officer made first contact with the owner, who stated that everyone was out of the building and that the fire was in the basement. The officer then completed a 360° size-up of the structure and reported a working fire in the walk-out basement of the residence. Fire was showing from a basement glass block window on side Beta and the side Charlie basement window (with 50-percent involvement). It was noted that the smoke conditions were changing from gray to black to brown, an indication of structural involvement. 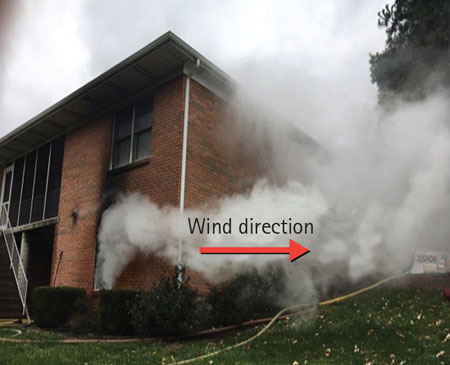 Simultaneously, the ladder exterior crew was controlling the natural gas supply to the residence. Once the crew made entry, they checked for extension in the basement area with the assistance of the interior ladder crew. Hot spots were extinguished, and the fire was declared under control at 9 minutes and 7 seconds from the time of arrival. Extensive overhaul was complete.

An additional attack line was positioned to the first floor to check for extension through the Alpha side front door. That crew reported no extension and gave an “all clear” of the structure.

Note: The door to the basement from the first level was closed, preventing extension. 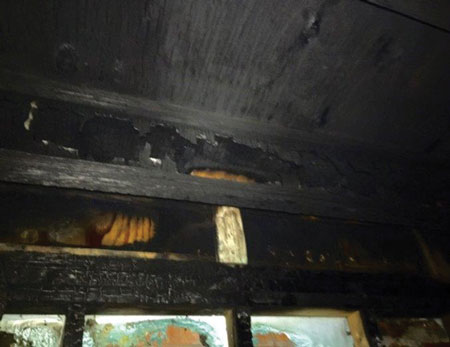 This fire was driven by 34-mph wind gusts that contributed to fire spread when the basement window facing the west failed (photo 4). Engineered wood I-joists in the room of origin were exposed to fire to the point of failure (photos 5, 6).

This incident was eerily similar to our line-of-duty death incident almost nine years earlier; both incidents were well-developed fires in the basement area extending into the wood framing of the structure. Also, both had smoke conditions that went from gray to black to brown, an indication of structural involvement. 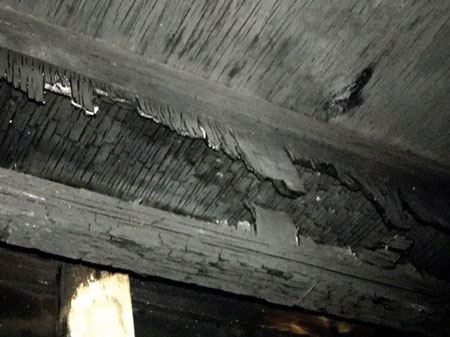 On November 19, 2016, the first-due crew was faced with similar and additional issues that included the following:

With the combination of an SOG to combat basement/belowgrade fires, smoke reading and building construction classes, and an initial transitional attack, the fire was stopped in its tracks. Although the dwelling suffered extensive damage to the basement’s structural members, this incident’s outcome was a success, with life and property saved that day.

GRANT BURNS is a 34-year fire emergency medical services veteran and the operations captain with the Colerain Township Department of Fire and Emergency Medical Services in Cincinnati, Ohio. He is an Ohio state certified firefighter level II, fire instructor, fire inspector, and emergency medical technician. Burns has a bachelor’s degree in fire and safety engineering technology and an associate degree in fire science from the University of Cincinnati. He is also a former member of Ohio Task Force 1 and the Hamilton County Urban Search and Rescue Teams.