“No substitute for basics”

When plans start to break down, the comment made is, “Well, it’s back to the drawing board” or back to the beginning. When do things begin? They begin with the basics. The basics are highly unappreciated. We learn the basics in academy, drilling and drilling until it’s muscle memory. However, once we get to the field, we start to learn and train to elevate our skills. As time passes, we focus more and more on special training: high angle, confined space, trench rescue, machine rescue, and structural collapse, to name a few. The training available is endless, and it can be too easy to rapidly grow your portfolio without reassessing your basic skills.

If you spend too much time learning the “tricks” of the trade, you may not learn the trade. There are no shortcuts. “If you’re working on finding a shortcut, the easy way, you’re not working hard enough on the fundamentals. You may get away with it for a spell, but there is no substitute for the basics, and the first basic is good old-fashioned hard work.”—John Wooden, head coach of the University of California men’s basketball team.

Think of building a house: You lay a solid foundation and build each level one on top of the other, all on the solid foundation. However, as the years pass, cracks can form in even the most solid foundations. These cracks, if left unattended, will grow and grow until one day there is a catastrophic failure. You can avoid this by routine inspection. If you catch a crack when it’s small, it can be fixed.

The Greek philosopher Epictetus once said, “That’s why the philosophers warn us not to be satisfied with more learning, but to add practice and then training. For as time passes, we forget what we learned and end up doing the opposite and hold opinions the opposite of what we should.”

I have been a firefighter and paramedic for more than eight years. I know, “Just a youngster—what does he know?” I must admit, five to eight years is the perfect amount of time to build level on top of level and forget to review the foundation for cracks. This may not show as a failure of a skill, but it can show as a failure to remember why. Why was four feet by four feet chosen for the size of a ventilation opening? Why do we choose a 2½-inch line over a 1¾-inch line? Why do we change the angle of the ladder for rescue vs. reaching the roof for ventilation? On the medical side, why did you choose that size of endotracheal tube for intubation? These choices are made without thinking and, at times, are second nature. But if we slow down, can we answer the questions? Years of experience help us to create shortcuts and develop “gut feelings” to improve our skills. However, without regular review of the basics, information on “why” can silently disappear.

Gautama Buddha, known simply as the Buddha, once said, “Thousands of candles can be lit from a single candle, and the life of the candle will not be shortened. Happiness never decreases by being shared.” Buddha may have been talking about happiness; however, if you replace “happiness” with “knowledge,” the message remains the same.

The value of a harsh mentor

Mentor was a character in Homer’s The Odyssey, a thrilling tale of Odysseus’ journey to return to his wife Penelope after the events of the Trojan War. Mentor himself played only a small part in the epic, but Odysseus’ respect for him caused Athena to use his likeness as a disguise, all ending happily. Spartan warriors were groomed and trained by seasoned warriors: Each man mentored his replacement in the phalanx. These battle-hardened veterans cared for and sometimes harshly tutored their charges in the ways of music; poetry; sports; politics; civics; and, of course, battle. This type of education and focus on their place not only in the phalanx but also on their role as servants to the state of Sparta is what made the Spartiate so formidable in combat. Since time immemorial, the veterans passed on their knowledge and experience to the younger generation; this was the way of the world. This is still the way things are taught in some areas of our society.

My beloved Marine Corps is the perfect example of where harsh realities are taught harshly to budding recruits. To the unindoctrinated, the screaming, aggression, and often manic behavior can look intimidating. Your eyes are not fooling you. It is intimidating. The purpose, though, creates a comfort with the uncomfortable, the ability to make decisions under stressful situations, and forces the recruit to grow as a person at a rate that can be uncontrollable. To the drill instructor, there is no greater reward than taking that raw recruit, adding heat and pressure, and coming out at the end of the cycle with a Marine.

So, I pose these questions: Why is there so little of this in the fire service? Where is the grizzled smoke-eater who would pick you apart and build you back up again, those who will point out your tiniest flaws because they want to see you grow and know you can be better? Where are the knowledgeable veterans who feel it is their duty to pass on what they know? Too often, the veteran firefighter is caught with an aggrieved eye pointing at the new kid for some real or imagined transgression. If, by chance, the new kid asks this senior a question, he is met with indignation; mild neglect; or, worse, a hostile dismissal. This cannot go. The new kid doesn’t know that the emergency scene is a harsh mistress whose only master is death. Where is the battle-scarred warrior who rose up to deny her master’s due? Why are these harsh men and women looked upon as anachronisms, relics of a bygone era where hard lessons made hard men and women? What did we lose when we stored all of their knowledge on a shelf next to their scorched lids?

Times are not as hard as they were when iron men scaled wooden ladders, tucked their beards into their mouths, and made penny novel rescues of fair maidens from the perils of a fiendish inferno. They are harder. There are fewer of us now; training is expansive and encompasses topics our forefathers never envisioned. Homes are bigger, fires burn hotter and move faster than ever before. Technical prowess for the well-rounded modern firefighter includes emergency medicine, construction of both buildings and vehicles, hazardous materials, and a myriad of other specialties—the “one-stop shop” for all of your emergency needs.

What has not changed is the harshness of the lessons learned, lessons bled for and died for, which are being resurrected as still applicable in this day and age. Flow path control has been known about since the 1800s. Why are we only now rediscovering it? Smooth-bore nozzles are prime tools for aggressive interior attack because of volume, reaction, and simplicity, and we are only now returning to them when the “latest and greatest” had not done the job we expected it to. When did we reinvent the wheel only to find out that the old one worked just fine?

All of our harsh lessons must be taught to our next generation. Understand my focus, OUR next generation. Introduce them to the harsh world they will learn to love, and teach them how to thrive in it. Most lessons needn’t subscribe to the drill instructor approach, but those that will save a life can and at times must. Getting in the mud with our new kids should be seen as a privilege, and giving them these hard, sometimes heartbreaking lessons “double dirty” provides them with the needed stress to grow and thrive. It is as true in the fire service as it is anywhere else that “steel sharpens steel.” However, the only thing that will harden steel is heat. We shouldn’t be afraid to judiciously apply heat where needed. This is not an endorsement of hazing or abuse but rather a belief that the ability to teach harsh lessons with firmness, underscoring the gravity of the consequences of failure, be returned to us. This is not a job for the infirm of mind or soul or the person who believes too highly of himself because harsh lessons harm the infirm and destroy the grandiose. We must teach our next generation in a way that keeps their minds, bodies, and souls intact for the duration of a career. This is where the greatest value lies—not just in training hard but in training harsh. 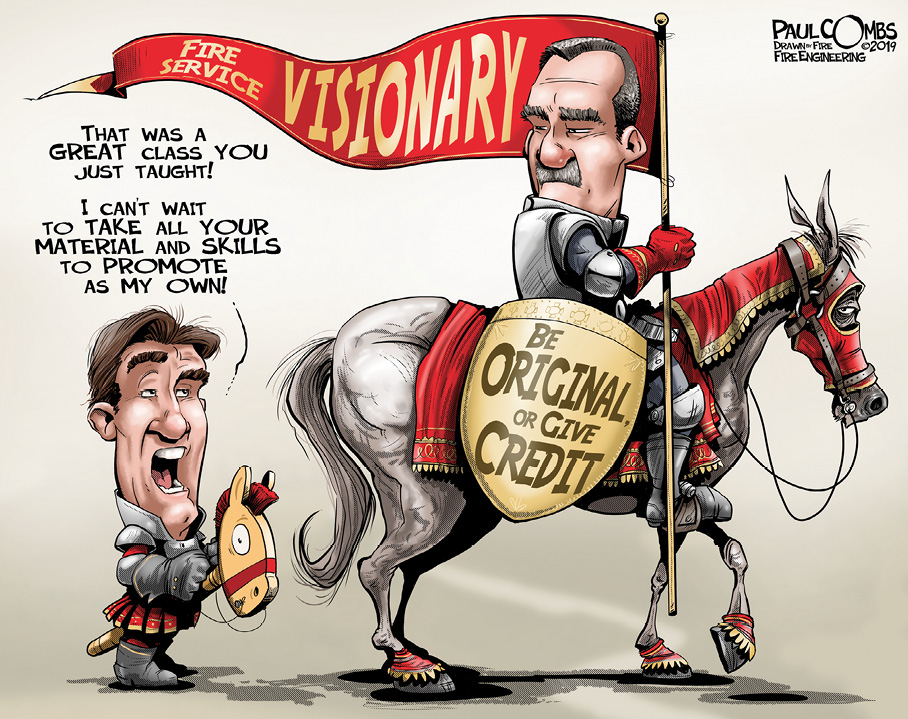