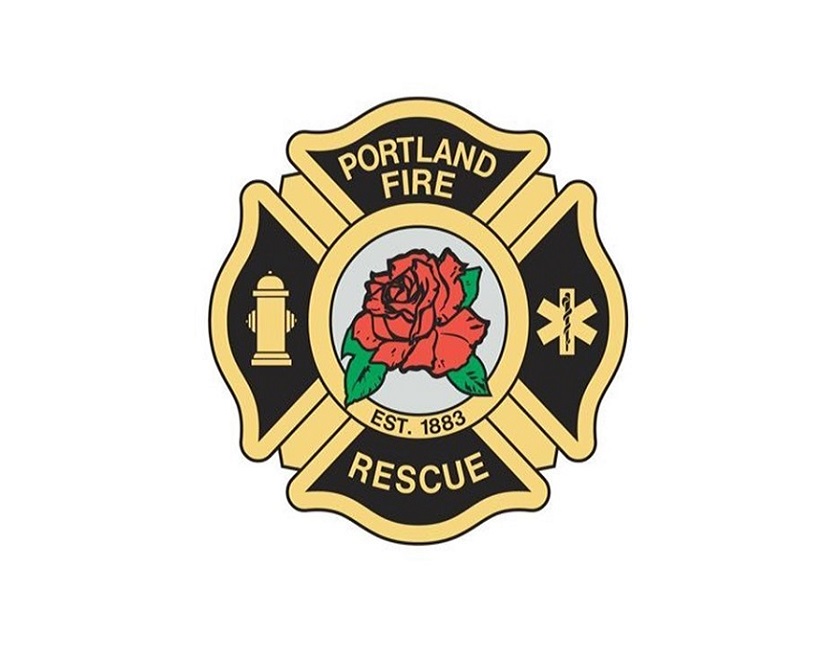 Krystie Grandy’s pitbull boxer Lily started “going berserk” about 3:30 a.m. Sunday, barking and clawing at her bedroom door to get out.

Grandy walked into the living room after the dog woke her up. She pulled back the shades.

“All I saw was red and orange, just flames,” she recalled Tuesday.

Fire engulfed the building across from her on the west side of the Heidi Manor apartment complex in Northeast Portland.

The flames were creeping toward Grandy’s building, east along an elevated skybridge in the middle of the complex that connects two of the buildings in the complex.

“The flames were halfway to our side,” she said.

Grandy screamed for her boyfriend, Justin Melius, to grab his 4-year-old son and the couple’s dog. They raced to the rear balcony.

Melius jumped first. Grandy handed down the boy and the dog. She raced back inside the second-floor apartment to search for her phone, but she suddenly heard their front windows popping out. She ran back, jumping from the balcony, about 15 feet from the ground.

Grandy and other residents of the 14-unit complex off Northeast Weidler Street, between 22nd and 24th avenues, described similar harrowing escapes as fire quickly blocked stairwells.

Two men died and four people were injured in the fire that tore through three separate wooden apartment buildings.

The intensity and rapid spread of the pre-dawn blaze have raised questions about the cause of the fire. Portland police and Fire Bureau arson investigators haven’t determined how it started yet.

Residents decried the absence of a sprinkler system in the 1972 complex. Others asked why the owners and property managers allowed a large dumpster to be placed in the carport directly under the west side of the complex.

The three buildings at 2226 N.E. Weidler were arranged in a U-shape, with two floors of apartments over the carport.

One witness said he first saw flames roll up the stairs from the dumpster after other residents and immediate neighbors reported hearing fireworks coming from the front driveway of the complex and then seeing flames.

Investigators will get access to the property Wednesday, fire officials said. Engineers were assessing the buildings Tuesday.

“This was a fire that had rapid fire spread through multiple units, people jumping out the window. People walking through fire, people that had coded,” Boone said.

A fire in the middle of the night on a hot, dry day “gets going” and spreads, the chief said.

“People didn’t have much of a chance,” Boone said. “The way this building was constructed had few exits. That’s not something you’re going to see in newer construction, but you’re going to see a lot of these garden-style apartments’ exterior entrances, where people will be trapped on the second and third floors, and if their main route, a common stairwell, has burned through, the only avenue is to jump.”

Portland has about 6,500 large buildings similar to Heidi Manor that have no sprinklers, according to Paul Jennings, senior fire inspector with the city Fire Bureau.

City fire code didn’t require sprinklers at the time they were built, he said. If no substantial restoration or damage occurs at such a building, the original code requirement stands, he said.

Dumpsters aren’t supposed to be stored in buildings or placed within 5 feet of combustible walls, openings or roof eave lines, according to city fire code.

‘I COULD SEE HEAT WAVES’

People were trying to escape the fire “any which they could,” said Ryan Gillespie , Portland fire operations chief.

Patricia Patterson, 64, said her 19-year-old granddaughter woke her up, saying, “The apartments are on fire up, get up!”

She ran to the front of her second-floor unit in the apartment building at the far end of the complex and looked out the patio.

“I was like ‘oh my God,’ I could see everything was engulfed,” she said. “I could see the heat waves in front of me.”

She kicked the screen out of her son’s rear bedroom. He wasn’t home at the time. Her granddaughter Ondrea Murray didn’t hesitate and jumped out.

Patterson said she climbed out the window and was hanging on when she noticed a man coming from the street behind their apartment and she yelled out to him: “Help! Help! Help! Please help!”

The man came under her window. “I just let go when I saw him standing there. I just couldn’t hold on anymore,” she said. “I landed on the ground and just took off.”

She said she was nervous to jump because she has four metal plates in her neck from a past neck fusion.

She and her granddaughter both scaled a wire fence to get at least a block away.

Patterson was treated at a hospital for smoke inhalation and woke the next day with bruises up and down her left arm, a right sprained ankle and injured toes on her left foot. Her granddaughter fractured her right heel.

Patterson and Murray are now staying at a relative’s home, wondering what’s next. Her granddaughter had just moved from Philadelphia to live with her, hoping to attend college in the Portland area. Patterson is set to start a job later this month with Multnomah County.

“Those apartments have one way in and one way out,” Patterson recalled. “Everything was on fire. I mean everything.”

Patterson keeps thinking that if her granddaughter “would not have been there, I probably would not be here.”

Barbara LaMorticella was house-sitting at her daughter’s home across the street from Heidi Manor and had stayed up until the wee hours that morning watching a TV series.

She called 911 and by the time she hung up with the emergency dispatcher, flames were everywhere. “It went up so fast,” she said.

She said she saw a man roll on the ground slowly away from the apartment complex across the asphalt of Weidler Street and to the curb near her before fire trucks arrived.

The man didn’t have on a shirt or shoes and it looked as if he had been burned, she said. Some people performed CPR on him, she said.

Police then came to the home and told her she had to evacuate, LaMorticella said.

She grabbed her daughter’s dog and an officer helped her walk about a block away.

“It was horrible. Those poor people,” she said.

‘THEN I JUST HEARD SCREAMS’

Tommy Mueller and Kay Olsen live in a single-story apartment building just to the east of Heidi Manor.

Mueller said he heard fireworks around midnight, again at 2 a.m. and then at 3 a.m., when he saw a group of teenagers and others in their early 20s bolt from the front of Heidi Manor.

He said he heard one woman scream, “What have you done?”

“The flames were 20 feet above the building. It was a roaring fire,” he said. “Then I just heard screams. The screams went on, and it was scary.”

He grabbed a hose from his apartment building and hosed down what he could of Heidi Manor on the other side of his fence as he watched people jump from third-floor units.

‘WE’RE HERE FOR THEM’

Nearby power lines were arcing from the heat as firefighters arrived.

In all, 120 firefighters fought the blaze and seven ambulances responded.

The American Red Cross has provided a $500 debit cards to Heidi Manor residents and worked to find them places to stay.

Christine Cordner, who lives on nearby Northeast Halsey Street, has worked to crowd-source Sullivan’s Gulch neighborhood donations for the fire victims.

She helped set up gofundme pages for several families and posted photos of lost cats from the property.

A firefighter was able to find one singed cat, Paloma, who was taken to Dove Lewis for care, and belongs to a woman who was hospitalized with injuries, Cordner said.

“We’re just trying to let them loudly know that we’re here for them,” she said.

Grandy, 35, who escaped with just the tank top and shorts she wore, is grateful for the support.

“We lost our IDs, birth certificates, everything,” she said. “So we’re starting fresh. I’m just thankful for the help and outreach of our village, the strangers donating to help us out.”

Patterson said she returned Monday and saw the charred remains of what used to be her and her son’s home.

“It’s heartbreaking,” she said. “It just made me realize how close we were, the choice we had to make was life or death.”