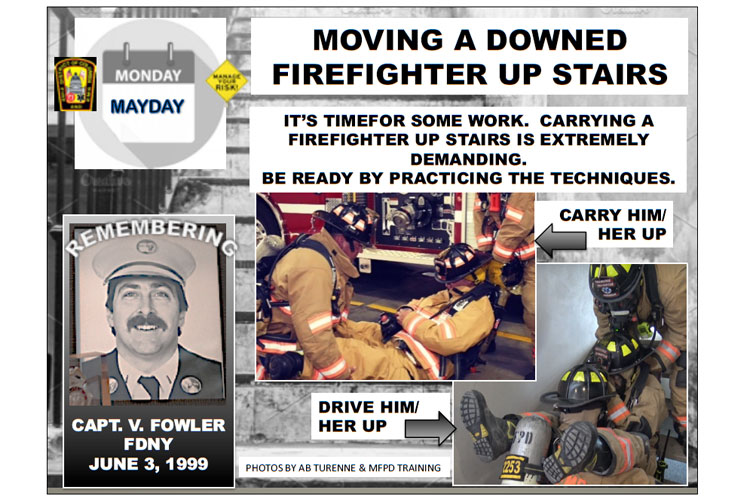 This month we review a fire from 1999. While almost 20 years ago, there are a lot of lessons we can take from it, including one of real heroism. On June 3, 1999, New York City firefighters were sent for a fire in a detached dwelling. They found a fire in the basement with pack-rat conditions. As Fire Department of New York (FDNY) Captain Vincent Fowler and Rookie Firefighter Torns were searching for the seat of the fire, they encountered a collapse of the floor above and they were running out of air. Captain Fowler ordered everyone out of the basement. During their exit, the two become separated and the captain ran out of air. Firefighter Torns was able to locate Fowler and give him some air. Captain Fowler transmits a Mayday call before losing consciousness. Torns tries in vain to remove Fowler from the basement. Rescuers arrive but it takes a long time to remove the captain from the basement. He succumbs to his injuries the next day. You can read more about this fire here: Fowler FDNY LODD

The rescuers were faced with the near impossible task of carrying an unconscious firefighter dressed in full turnout gear wearing a self-contained breathing apparatus (SCBA) up a set of narrow basement stairs. This was compounded by intense fire conditions and the need to exit as soon as possible. Imagine this scenario. How will you handle it? Start with ABC…

RELATED: Moving a Down Firefighter Up Stairs

Step 1: Air. When getting to a downed firefighter, the first step is to check his/her air status. Also, get on the air and advise Command.

Step 2: Back/Belly. Check his/her back for the drag rescue device (DRD). You may be able to use the DRD to move the firefighter. Or, readjust the waist belt to connect through the legs. This will assist when lifting.

Step 4: Drag. Start moving the member in trouble. There are several techniques to consider. This month we will highlight 2 techniques.

Let’s go practice the two techniques. Although no one wants to think of a firefighter needing to be rescued, we need to be prepared if it happens. In addition to getting you ready for the rescue, you will honor the memory of FDNY Captain V. Fowler.

Please send in pictures of you and your crews performing the drills/skills in the monthly Mayday Monday post. Send them to mayday.monday@dc.gov. Thank you.