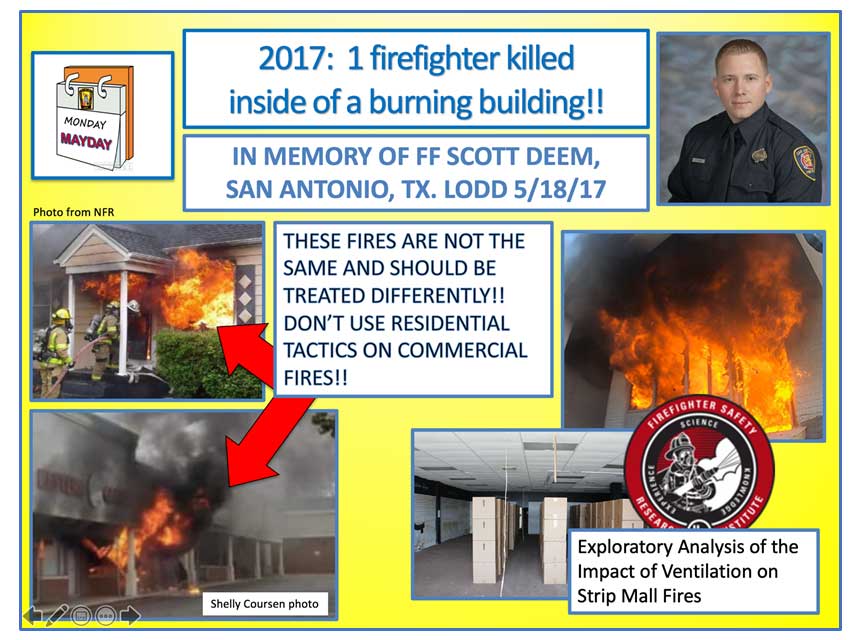 The staff here at Mayday Monday has been doing everything they can to stay away from the Coronavirus. We hope you all are doing the same. This is a serious virus that has claimed several firefighters throughout the country. Please wear your personal protective equipment (PPE), wash your hands, and practice social distancing. We will get through this.

This month, we look back at the line-of-duty deaths (LODDs) from 2017. That year, we saw one firefighter killed inside of a burning building. While this is a great milestone and one that should be celebrated, we must remember the firefighter lost. San Antonio (TX) Firefighter Scott Deem was killed while operating at a fire in a strip store business. Firefighter Deem was a six-year member of the department, married with two children. He was working on Ladder 35 on the night of May 18, 2017. He and his partner entered the building searching for trapped occupants and the location of the fire. They found the fire and called for a hoseline. Before the fire could be extinguished, conditions quickly changed, and a Mayday was sounded. Firefighter Deem was not located but his partner was rescued with life-threatening injuries. Fire conditions continued to worsen, and a defensive attack was called for. After the fire was knocked down, Firefighter Deem’s body was recovered from the structure.

The investigation revealed several contributing factors to the death. The Texas LODD report listed this as one of its recommendations:

Fire suppression tactics need to match the structure and conditions.

Translation: Don’t use residential tactics on commercial fires. Most of our fires occur in residential buildings. These fires lend themselves well to smaller handlines with preconnected setups. In fact, most of our rigs are designed around this typical fire. This works well most of the time. But, when the fire is different, it is time for different tactics and tools. Mayday Monday is about firefighter survival and this month focuses on Mayday Prevention. While you are socially distancing please take some time and review the report on the death of Firefighter Deem. In addition, to learn more about the dynamics and dangers of fires in strip malls check out a new research report from UL Firefighter Safety Research Institute. Released in April, the Exploratory Analysis of the Impact of Ventilation on Strip Mall Fires examines different ventilation profiles in an acquired strip mall and how they affect fire growth. It compares no ventilation to horizontal and vertical ventilation and the impact each has on the fire behavior. This is another information-packed report from our friends at the UL FSRI.

In terms of firefighters survival, in 2017 one firefighter was killed while operating inside of a burning building. Let’s take this opportunity to honor Firefighter Scott Deem by learning about his sacrifice.

Thanks for visiting the May 2020 Mayday Monday. Keep managing your risk! See you in June.

Mayday Monday: Lucky to Have a Plan?