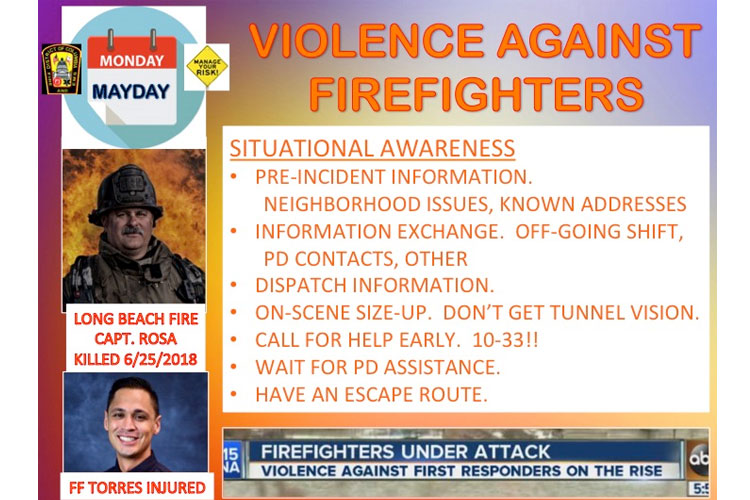 The monthly Mayday Monday Firefighter Survival posts that fill your inbox or that you see on social media are designed to address fireground survival and the rescue of trapped/down firefighters. Ultimately, Mayday Monday is intended to help firefighters survive any and all fireground hazards. Recently, we have seen an increasing problem with violence involving firefighters. Last week on Monday, June 25, two members of the Long Beach (CA) Fire Department were gunned down after extinguishing a fire in a senior facility.  One of the firefighters, Captain David Rosa, died as a result of the shooting. The gunman, a resident of the facility, reportedly started the fire, but a motive in the fire and shooting of the firefighters is not yet known. Here is a link to a news story about the shooting from the Los Angeles Times. Please take some time to learn about the life and death of Capt. Rosa and the injury to Firefighter Torres.

From the U.S. Fire Administration: Fire Captain David Rosa was assigned to Engine 10 and was working a regularly assigned shift that began at 0800hrs on June 24, 2018.

At 0349hrs on June 25, 2018, Captain Rosa and the members of his engine company were dispatched to a report of an explosion at a multiple residential building.

When Captain Rosa arrived at the scene, he and his crew were assigned to enter the building, climb to the fire floor, and attack the fire. As Captain Rosa worked on the 2nd floor, he was struck by gunfire.

Captain Rosa was removed from the building by other firefighters and transported by the Long Beach Fire Department ambulance to a local hospital. Despite treatment at the scene, in the ambulance, and in the hospital, Captain Rosa was pronounced dead at 0523hrs. His death was caused by the gunshot wound.

Although this is a horrible incident and one that leaves us befuddled as to why and how this happened, it is not a new problem for the fire service. Here is a link to a NIOSH report on the death and injury to Kentucky firefighters during a domestic-violence incident back in February of 2004:  NIOSH-Ky. Lt. Killed

What can firefighters do to survive the violence against us? There is not a magic answer to keeping us safe during these incidents but maintaining good situational awareness may be the most important step. This can start when you are off duty by paying attention to the news reporting on tensions in your response area or a planned protest or demonstration. When reporting for duty, check with the off-going shift to see if they witnessed of were aware of issues in the area. All of this preincident information can help prepare you for a future response.

During the response, gather as much information as possible. Use your dispatchers and make sure to check the computer for updates to response information.

When arriving on the scene, get the BIG picture and avoid tunnel vision. Call for help early and use the “10-33” message, if needed.  If conditions indicate the need for police assistance, stage and await their arrival. Leave yourself and your crew an escape path if tensions flare and conditions change.  Don’t get blocked in.

Please take the July Mondays to review procedures for response to violent incidents. Here is one more article for you to read and help with your situational awareness: Situational Awareness to Potential Violence

Thanks for checking out his month’s post.  Please send me pictures of you and your crew performing the Mayday drills/skills to mayday.Monday@dc.gov. See you in August!!