As the personnel assigned to this alarm met at the apparatus, I said, “Oh boy, a gas leak. That sounds serious. Good thing we’re sending a battalion chief.” Sixteen minutes later, the station tones sounded again, this time with a large cadence of apparatus dispatched to the same address. But instead of a gas leak, it was for an explosion with firefighters injured. What initially appeared to be a routine gas leak nearly turned tragic with a click of a furnace autoignite pilot.

A telecommunications subcontractor was performing underground horizontal boring operations in a residential subdivision when he cut into a natural gas line, causing a leak. He notified Northwest Natural Gas personnel, who responded to the scene. Gas company personnel determined that a two-inch, 40-psi line had been severed. They evaluated the situation, immediately evacuated the homeowners adjacent to the leak, and called 911. Northwest Natural Gas policy states that if the natural gas levels are 20 percent of the lower explosive limit (LEL) inside a residence, personnel will call the fire department.

When the CFD arrived on-scene, gas company officials briefed them on the situation. During the briefing, the gas company officials never mentioned directional boring or their suspicion of high gas levels in the garage. Firefighters used the gas company’s monitoring equipment and evaluated the home’s interior to determine if there were dangerous concentrations of natural gas in the home. All things began routinely; the medic unit was cleared from the scene, and the four-person engine company and battalion chief were to work throughout the incident. The crew included Captain Chip Bryant, Apparatus Operator John Footman, and Firefighters John Stanislaw and Raina Eshleman, who had been with the CFD for eight days.

Before entering the home, the crew conducted a safety briefing led by on-scene Incident Commander (IC) Tom O’Connor. They confirmed using the gas monitor; they discussed self-contained breathing apparatus (SCBA) use; and they were reminded not to turn on any light switches, not to operate the power garage door, and not to shut off power at the breaker. Their tactical objectives were simple: check for natural gas levels and ventilate the structure by opening windows and doors. Before entering, Stanislaw and Eshleman performed a skin check on each other, just as they were taught in their new employee orientation, confirming proper personal protective equipment (PPE) coverage.

Crews made quick progress inside the home, opening windows and doors and monitoring gas levels. At no time were gas levels above the 20 percent of LEL (one percent natural gas by volume). Once the crew checked and ventilated the home’s main body, they proceeded into the garage. Bryant approached the garage door to manually open it and Stanislaw proceeded to the back door. Eshleman was mid-garage with the gas monitor in hand. The garage door release was missing the release rope, so Bryant removed his glove to pull the release pin by hand. As Stanislaw opened the back door, he heard the clicking of the gas furnace’s autoigniter attempting to ignite. He shouted, “This thing is trying to light.” At the same moment, Eshleman shouted, “We are in full alarm,” as she watched the gas detector flash into alarm mode.

Footman was in the driveway, and O’Connor was on the sidewalk in front of the home when the explosion occurred. The garage door and Bryant were both blown out from the front; three panels landed in the middle of the cul-de-sac. Bryant was blasted directly into an SUV parked immediately in front of the home. The back of the two-story home’s structural wall was knocked off its foundation and leaned dramatically outward as Stanislaw was launched 20 feet into the backyard. The garage’s side wall, which supported the beam carrying the second floor’s weight, disintegrated. When the wall failed, the entire second floor collapsed, with Eshleman below. 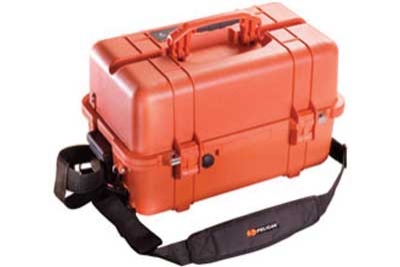 An explosion, a fireball, a major structural collapse, and a subsequent fire—certainly any one of these fireground situations could be catastrophic. This incident had all four, with three firefighters at ground zero and one firefighter standing in the driveway, just outside the garage door.

Stanislaw, whose silhouette was burned into the garage’s back door, found himself in the middle of the backyard, his hood shredded from the blast and his shoulder sore from being pounded into the door. He could also feel burn injuries to the back of his head. His first thought was of his crew as he stood up. Next, he attempted to radio a Mayday, but his radio had been blown from his radio pocket, so he lacked communication with his crew as well as Command. His next reaction was to reenter the building and search for his team.

Eshleman was dropped to the ground by the explosive force and showered with debris when the second floor collapsed. When the outside wall blew out, the large beam that supported the floor gave way, creating a lean-to collapse with very minimal void spaces. Eshleman dug herself free and made contact with Stanislaw, yelling and motioning for him to stay out as she turned and crawled out the garage door opening toward Bryant.

In the immediate aftermath of the blast, Footman darted toward the attack pumper, which had been cautiously parked short of the incident. He quickly relocated the rig, set the pump, and took to fire attack activities. O’Connor, whose back was turned when the blast occurred, called for a full first- and second-alarm assignment. “I thought the crew had been killed or critically injured. I was sure we would be in the rescue or recovery mode,” said O’Connor.

The three firefighters reunited near the front of the building and contacted Command face-to-face to confirm the entire crew’s accountability. They realized Bryant was burned, so he was directed toward a safe area for further evaluation. Bryant was treated on-scene and transported to the Oregon Burn Center with burn injuries to his ear and hand. Footman, Stanislaw, and Eshleman immediately redeployed to firefighting activities until arriving resources relieved them. The three were then transported to the hospital for evaluation. Footman had respiratory symptoms from inhaling superheated air; Stanislaw had minor burns to his ear, face, and back of the head; and Eshleman was taken as a precaution.

“On this day, we were both lucky and good,” explains Chief Ted Kunze. “We were lucky in the fact that we were standing in the right place when the explosion occurred. We were good in the fact that we followed the rules. It was just a gas leak, it could have been downplayed, but it wasn’t. The IC reviewed the facts, as he knew them, with the entry team; they reviewed their objectives; had a safety briefing; and the crews wore their PPE. Had our crews been complacent and treated this like so many other gas leaks, the situation could have been much worse. This scenario gave us the test before the lesson; now we need to share what we learned so that similar near tragedies can be avoided.”

Wearing full PPE, including SCBA, should be a standard operation procedure. Stanislaw’s hood was shredded, and his SCBA mask was literally crystallized in the blast. Both Stanislaw’s and Eshleman’s house uniform showed heat damage in the groin area, where the fireball blew through the hook-and-loop fastener closure on the turnout pants. There’s little doubt that the SCBA provided lifesaving protection to each firefighter’s respiratory tract.

Get all the information you can from all available resources. The homeowner knew that there were high concentrations of natural gas in the garage, but that information was not communicated to fire crews. Instead, the gas company supervisor briefed crews on the situation and shared only limited information. If the gas company had knowledge of the garage’s high gas levels, or even a suspicion of high gas levels, the information was never communicated to fire crews; this quite possibly placed the firefighters in a highly dangerous environment.

Understand how natural gas travels. Don’t just think of natural gas as being lighter-than-air gas that easily dissipates; suspect migrating underground gas. Directional (horizontal) boring operations are very problematic once a gas line is breached. The gas leaks from the line and tends to follow trench lines, because it cannot release into the atmosphere. The crawl space and garage are the most likely areas to encounter migrating gases.

Retain a gas company liaison at the command post for a unified command. The gas company treats the fire service as natural gas experts. They have been trained to turn the incident over to fire personnel as soon as it is practical. When firefighters arrived on-scene, the gas company was ready and willing to turn the scene over to fire resources, thus placing full incident control and management with the fire crews.

Call the electrical utility company and be prepared to cut power to the home in question or to the immediate area. There is no really safe way to secure a home’s electrical service without potentially causing a spark. Avoid shutting off breakers or pulling meter bases in potentially explosive atmospheres, because both cause sparks.

Does your department have a gas monitor and, if so, do you have training records to document proficiency? Most fire department gas monitors are calibrated to pentane, which is a more likely gas when dealing with confined space issues, not gas leaks. Natural gas is primarily methane and has different LELs, compared with pentane.

When should you consider a two-in/two-out or a rapid intervention team? The Occupational Safety and Health Administration requires two-in/two-out when crews operate in an immediately dangerous to life and health (IDLH) environment. Is 20-percent LEL an IDLH?

Constantly review risk/benefit decision making. Are there times when firefighters should not enter a structure?

Does your department have an operating guideline for natural gas emergencies? If so, does it spell out procedures based on LEL concentrations?

Be prepared to evacuate a larger area than you initially plan for. What is a reasonable evacuation area and hot zone? The home next door and across the cul-de-sac both suffered significant damage.

Foster an environment that enlists everyone to be a “safety officer.” Encourage all members on the emergency scene to act as their own safety advocate and share their thoughts when appropriate.

Never underestimate your gut instincts. Wisdom comes from years of exposure to many situations. Veteran firefighters know when something doesn’t look or feel right. In this case, the gas company called the fire department, which should add concern, but then again, because the gas company is on-scene, things may seem under control.

TROY BUZALSKY is a 26-year fire service veteran and the division chief/fire marshal for the Canby (OR) Fire District. He has an associate degree in fire protection technologies from Chemeketa Community College and a bachelor’s degree in fire administration from Eastern Oregon University. He is a certified paramedic, a National Fire Protection Association (NFPA) fire officer 4, an IFC inspector 2, an NFPA instructor 2, and a strike team/task force leader. He is also vice president of the Oregon Fire Marshals Association and is on the incident management team for the Oregon Firefighter Safety and Survival Symposium.

One Killed and Three Injured in MA Apartment Fire