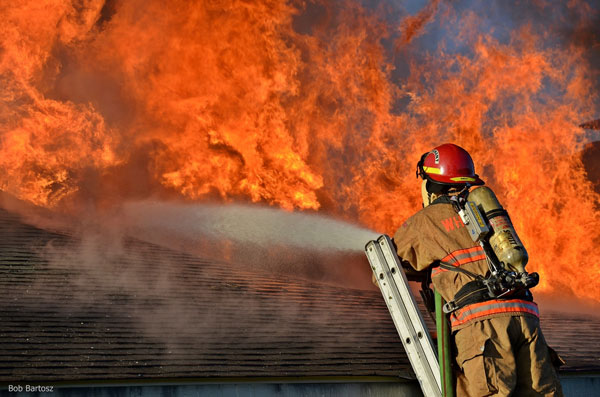 On November 20, 2015, fire departments from three North Carolina counties were dispatched after receiving a 911 caller reporting they saw smoke and flames coming from a home on Moore Farm road in Whitakers, North Carolina.

The Whitakers and Batteboro fire departments in Nash County responded to the scene, along with the Leggett fire company from Edgeombe County and a special call for a pumper and ladder truck from the Enfield fire company in Halifax County. First-in unit from Whitakers arrived on scene and found heavy fire showing from the roof of a large brick ranch home.

Firefighters made an interior attack on the fire and also search for the residents, but no one was home. Firefighter employed two 1 3/4-inch lines but flames were now controlling the whole attic area. Crews were then evacuated because of rapid fire growth and deteriorating interior conditions.

There were no local fire hydrants and drop tanks were set up. Tankers had to go more than one mile to get water. Two more 1 3/4 and a 2 1/2 water line were now working, plus the Enfield ladder truck was  now going in service. It took firefighters more than an hour to bring the blaze under control.

No injuries were reported. Thirty-five firefighters remained on location, performing overhaul and hitting hot spots. The cause of the fire is under investigation by the fire marshal’s office​.